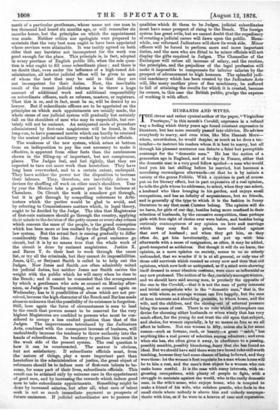 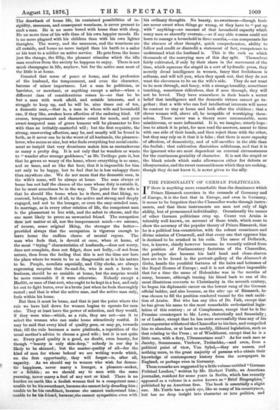 THE clever and rather cynical author of the paper, "Virginibus' Puerisque," in this month's Cornhill, expresses in a refined way a feeling which thirty years ago found constant expression in literature, but has more recently passed into oblivion. He advises everybody to marry, and even tries, like Mrs. Hannah More— whom, nevertheless, he would despise, as much as he does a tee- totaller—to instruct his readers whom it is best to marry, but air through his pleasant sentences one detects a faint but perceptible contempt for the "domestic man." He has the notion of a. generation ago in England, and of to-day in France, either that the domestic man is a very good fellow spoiled—a man who would lend you his last shilling before he married, but becomes a. moralising curmudgeon afterwards—or that he is by nature a.. variety of the genus Fribble. With a cynicism in part of course put on for literary effect, but in part expressive of a real opinion,. he tells the girls whom he addresses, to select, when they can select, a husband who likes lounging in his garden, and enjoys small occupations, and has an infinity of acquaintance, but no friends, and is generally ci the type to which it is the fashion in funny literature to say that most Curates belong. The opinion will do no harm, for girls of our day, besides being more confined in their selection of husbands, by the excessive competition, than perhaps. girls with free right of choice ever were before, and besides being curiously contemptuous of any opinion on love and marriage which they may find in print, have decided against that sort of husband ; and when they get him, as they often do, get him involuntarily, and put up with him afterwards with a sense of resignation, as often, it may be added, good-tempered as acidulous. But though it will do no harm, the opinion, as a mere opinion on society, seems to us so utterly unfounded, that we wonder if it is at all general, or only one of those odd survivals which remind us every now and then that old opinions, which now look so antiquated, as if a mind were showing' itself dressed in some obsolete costume, were once as influential as any now professed. The notion of to-day, certainlyamongst women, and we should have said among men, is precisely the opposite of the one in the Cornhell,—that it is not the man of petty interests and trivial occupations who is the "domestic man," that is, the man with whom an average woman can live happily, but the man of keen interests and absorbing pursuits, to whom home, and the wife, and the children, and the closing-out of external pressure bring the sense of rest. There is no rule which philosophers can devise for choosing either husbands or wives wisely that has very much effect, for the young do not trust the old upon that subject, and choice, for women especially, is by no means so free as we all affect to believe. Not one woman in fifty, unless she is for some reason—such as fortune, rank, or beauty—a great "catch," has anything like a real power of selection among admirers ; and even when she has, she often gives it away, in obedience to a passing, possibly sensible, possibly blundering, fancy that she has found an ideal. But we should have said there were two broad rules still worth teaching, because they had some chance of being believed, and they were these: let the woman's first requisite be a man whose home will be to him a rest, and the man's first object be a woman who can make home restful. It is the man with many interests, with en- grossing occupations, with plenty of people to fight, with a struggle to maintain against the world, who is the really domestic man, in the wife's sense, who enjoys home, who is tempted to make a friend of his wife, who relishes prattle, who feels in the small circle where nobody is above him and nobody unsympa- thetic with him, as if he were in a heaven of ease and reparation.

The drawback of home life, its contained possibilities of in- sipidity, sameness, and consequent weariness, is never present to such a man. He is no more bored with home than with sleep. He no more tires of his wife than of his own happier moods. He is no more plagued with his children than with his own lighter thoughts. The worry, and the sameness, and the weariness are all outside, and home no more insipid than his berth to a sailor or his tent to a soldier on active service. He gets from the home just the change, the fillip, the pleasant stimulus which the idle man receives from the society he happens to enjoy. There is not much champagne in life, anyhow, but for the active man most of the little is at home.

Granted that sense of peace at home, and the profession of the husband, the temperament, and even the character, become of minor importance. Let a man be politician, or barrister, or merchant, or anything except a sailor—when a different class of considerations comes in—so that he be but a man with work afield, and outside interests, and a struggle to keep up, and he will be, nine times out of ten, a domestic man,—that is, a man in whom wife and household can, if they like, awaken keen affection of the enduring kind. Of course, temperament and character count for much, and your sweet-tempered man of grave humour will be pleasanter to live with than an irritably-masterful will ; but the first requisite, the strong, unswerving affection, may be, and usually will be found in both, as it never can be in the worst of all husbands, the pleasure- lover, who seems so nice, but who finds everything but social excite- ment so insipid that very dreariness makes him as cantankerous as many a pretty dog. It is not only that he wanders or wants to "wander after strange goddesses," as Mr. Trollope puts it, but that he grows so weary of the home, where everything is so same, and so tame, and so like flat beer, that it is impossible for him not only to be happy, but to feel that he is less unhappy there than anywhere else. We do not mean that the domestic man, in the wife's sense, will be always at home. The man always at home has not half the chance of the man whose duty is outside it, for he must sometimes be in the way. The point for the wife is that he should like home when he is there, and that liking, we contend, belongs, first of all, to the active and strong and deeply engaged, and not to the lounger, or even the easy-minded man. In marriage, as in every other relation of life, the competent man is the pleasantest to live with, and the safest to choose, and the one most likely to prove an unwearied friend. The occupation does not matter at all, nor the temperament much—we assume, of course, some original liking, the stronger the better— provided always that the occupation is vigorous enough to leave home the endless charm of mental repose. The man who feels that, is devoid at once, when at home, of the most " trying " characteristics of husbands,—does not worry, does not complain, does not fidget, does not bully,—if not from nature, then from the feeling that this is not the time nor here the place where he wants to be as disagreeable as it is his nature to be. People, novelists especially, and City clerks, are always expressing surprise that So-and-So, who is such a brute in business, should be so amiable at home, but the surprise would be more reasonable if it were otherwise. Nobody except a Hazlitt, or man of that sort, who ought to be kept in a box, and only let out to fight bores, ever is a brute just when he feels thoroughly rested ; and that is what the active man, and the active man only, feels within his home.

But then it must be home, and that is just the point where the rule we have laid down for women begins to operate for men also. They at least have the power of selection, and they would, if they were wise—which, as a rule, they are not—use it to select the woman who can make home attractively restful. It may be said that every kind of quality goes, or may go, towards that, till the rule becomes a mere platitude, a repetition of the usual mother's advice to choose a good wife ; but it is not quite so. Every good quality is a good, no doubt, even beauty, for though "beauty is only skin-deep," nobody in our day is likely to be skinned ; but the master-quality of all—for the kind of men for whose behoof we are writing words which, on the first opportunity, they will forget—is, after all, capacity. As we should say to women who wish for domes- tic happiness, never marry a lounger, a pleasure -seeker, or a fribble ; so we should say to men with the same yearning, never marry a fool of any sort or kind. There is no burden on earth like a foolish woman tied to a competent man ; unable to be his sweetheart, because she cannot help dreading him ; unable to be his confidant, because she cannot understand him ; unable to be his friend, because she cannot sympathise even with his ordinary thoughts. No beauty, no sweetness—though fools are never sweet when things go wrong, or they have to "put up with" anything—no amount of that household capacity which many men so absurdly overrate,—as if any able woman could not learn to manage a household in three months,—can compensate for the absence of clear thought, quick comprehension, ability to follow and credit or discredit a statement of fact, competence to understand what the husband is. This is the rock on which thousands of the marrying men of this day split. Themselves fairly cultivated, if only by their share in the movement of the time, which squeezes the stupid in a sort of hydraulic press, they secretly dread intelligence in women, fancy that foolishness is softness, and will tell you, when they speak out, that they do not want the cleverness to be on the wife's side. They do not want to be seen through, and fancy, with a strange humility, sometimes touching, sometimes ridiculous, that if seen through, they will not be loved. They have somewhere in their heads a secret belief that intelligence and the domestic virtues cannot go to- gether; that a wife who can feel intellectual interests will never be content to stay at home and look after the children ; that a clever woman will, above all, be incapable of worshiping them- selves. There never was a theory more unreasonable, more mischievous, or more influential. It is, we imagine, utterly hopc- less to attack it in print, for men read the answers, assent to them with one side of their heads, and then reject them with the other, but they may rely on it that it is false ; that there is more capacity of affection, of domesticity, and of self-sacrifice in the able than the foolish ; that cultivation diminishes selfishness, and that it is the ignorant who are most dependent on external circumstances for the continuous geniality of character. It is not the stupid or the blank minds which make allowances either for defects or idiosyncrasies, and the sweet reasonableness which they are seeking, though they do not know it, is never given to the silly.