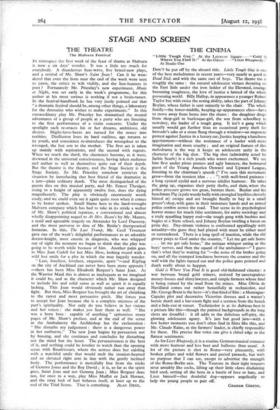 " Little Tough Guy." At the Leicester Square—" Gold is Where You Find It." At the Odeon— 'Liszt Rhapsody." At Studio One

DON'T be put off by the absurd title. Little Tough Guy is one of the best melodramas in recent years—very nearly as good as Dead End, and with the same cast of boys. The theme too is roughly the same : the natural adolescent virtues decaying on the East Side under the iron ladder of the Elevated, courage becoming toughness, the love of justice a hatred of the whole possessing world. Billy Hallop, in appearance a younger Robert Taylor but with twice the acting ability, takes the part of Johnny Boylan, whose father is sent unjustly to the chair The whole family—the lower-middle, keeping-up-appearances class—hare to move away from home into the slums : the daughter drops from shop-girl to burlesque-girl, the son from schoolboy to newsboy, the leader of a tough gang. It isn't a gang which usually would get further than an occasional petty theft for bravado's sake or a stone flung through a window--an impotent protest against Justice in a luxury car, Justice keeping aluncheon appointment—without the assistance of a leader with more imagination and more cruelty ; and an original feature of this melodrama is the way it keeps an adolescent unity in the character of the big shot. The big shot (admirably acted by Jackie Searle) is a rich youth who wants excitement. We see him first under pious posters and ugly banners, the-honoured guest of the Young America Onward and Upward -League, listening to the chairman's speech (" I've seen this movement grow—from the teeniest idea . . . ") with well-bred patience a long cynical eyelid and a nervous nihilist humour. He takes the gang up, organises their petty thefts, and then, when the police pressure grows too great, betrays them. Boylan and his henchman Pig (a pale weedy bully with strangled loyalties cleverly hinted at) escape and are brought finally to bay in a small grocer's shop, with guns in their immature hands and an armed police cordon across the road. That scene in its psychological horror atones for much false sentiment, for naive sociology and a truly appalling happy end—the tough gang with busbies and bugles at a State school, and Johnny Boylan twirling a baton on prize day. Day-dream violence is confronted appallingly with actuality—the guns they had played with must be either used or surrendered. There is a long spell of inaction, while the old grocer prays to God under the counter, Let me get safe home . . . let me get safe home," the antique whisper eating at the boys' nerves, and then the squeal of the ambulance—" I guess that's what they're waiting for "—the noise of the brakes going on, and all the cramped loneliness between the counter and the wall with the lights turned out and the police guns pointed and death really about to happen.

Gold is Where You Find It is good old-fashioned cinema : a war between brutal gold miners, assisted by unscrupulous money-bosses and slimy lawyers, and simple farmers whose land is being ruined by the mud from the.mines. Miss Olivia de Havilland comes out rather beautifully in technicolor, and Mr. George Brent is the hero—it's that kind of film : a Montague- Capulet plot and decorative Victorian dresses and a waster's heroic death and a bar-room fight and a sermon from the bench and a fade-out at sunset. Technicolor is at its dubious best in a picture like this—though the painted backgrounds in the long shots are dreadful : it all adds to the delicious self-pity, the glowing adolescent agony. It's jam but good jam—with a few better moments you don't often find in films like this, and Mr. Claude Rains, as the farmers' leader, is chiefly responsible for these. His precise fine voice can give a chisel edge to the flattest sentiments.

As for Liszt Rhapsody, it is a routine German musical romance with more htunour and less beer and balloons than usual. A lot of the picture is shot in Rome—very pleasantly, with broken pillars and wild flowers and period parasols, but with no purpose that I can see, except to advertise the strength of the Rome-Berlin axis. The Teutons in their tight trousers strut amiably like cocks, lifting up their little claws disdaining bird seed, setting all the hens in a bustle of love or hate, and Liszt himself—that doubtful dog—appears angelically to help the young people to pair off.