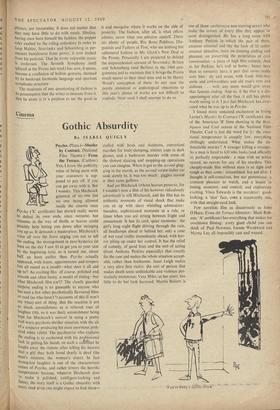 By ISABEL QUIGLY Psycho. (Plaza.)—Murder by Contract. (National Film Theatre.)—From the Terrace. (Carlton.) YES, I know the publicity value of being stern with your customers is sup- posed to pay off, if you can get away with it. But I wonder. This Hitchcock gimmick of NO ONE but NO ONE being allowed inside the cinema once Psycho ('X' certificate) has started really seems to defeat its own ends, since NOTHING but NOTHING in the way of thrills or horror could Possibly help letting you down after stringing You up so. It demands a masterpiece. Hitchcock's Voice all over the foyer urging you not to tell the ending, the management in near-hysterics (at least on the day I saw it) to get you to your seat by the beginning (and. as it turned out, about half an hour earlier than Psycho actually appeared, with trains, appointments and tempers lost all round as a result)—what does it all add up to? An exciting film of course, polished and, smooth and often funny. a model of timing—zbut what Hitchcock film •isn't? The closely guarded surprise ending is so guessable to anyone who has seen a few other psychotically flavoured films or read (as who hasn't?) accounts of this (I won't say what) sort of thing. that the reaction is not so much astonishment as a relieved roar of laughter (Ah, so it was that), astonishment being kept for Hitchcock's naïveté in using a pretty Well worn psychotic-thriller situation with the air of a conjuror producing his most enormous pink- eYed white rabbit. The psychiatrist who explains the ending is so enchanted with his professional luck in getting his hands on such a cateithat he laughs away the minute after telling his hearers that a girl they both loved dearly is dead (the man's mistress, the woman's sister). In fact wrong-key laughter is one of the characteristic noises of Psycho, and rather lowers the horrific temperature; because, whatever Hitchcock does to make it polished, intelligent-looking and funny, the story itself is a Gothic absurdity with every mad prop you might expect to find there— stuffed with birds and skeletons, convenient marshes for body-dumping, sinister cops in dark glasses, and a bathroom murder with some of the slowest sluicing and mopping-up operations you can imagine. When it got to the second glug- ging in the marsh, as the second corpse-laden car sank slowly in, it was too much: giggles started it then came guffaws.

And yet Hitchcock (whom heaven preserve, for 1 wouldn't miss a film of his however ridiculously advertised) is still Hitchcock, and the film has its authentic moments of visual shock that make you sit up with sheet whistling admiration: macabre, sophisticated moments as a rule, or times when you are strung between fright and amusement. It has its cool, quiet moments: the girl's long night flight driving through the rain, all headlamps ahead or behind her, only a cone of wet road visible immediately ahead, with hor- ror piling up under her control. It has the relief of comedy, of good lines and the sort of acting (from Anthony Perkins especially) that exactly fits the case and makes the whole situation accept- able rather than loathsome. Janet Leigh makes a very alive first victim. the sort of person that makes death seem unthinkable and violence par- ticularly monstrous; Vera Miles, as her sister, has little to do but look harassed. Martin Balsam is one of those unobtrusive non-starring actors who make the corner of every film they appear in seem distinguished. He has a long scene with Anthony Perkins in • which the pair of them, amateur criminal and (by the look of it) rather amateur detective, insist on keeping smiling and pleasant, on preserving the proprieties of civil conversation—a piece of high film comedy. And as for Perkins, he's well at home : better here than as romantic hero, a part that never- really suits him: sly and sweet, with frank little-boy smile and awkwardness and old man's eyes and dubious . . . well, any more would give away that famous ending. And so. if the film is a dis- appointment after all the fuss, it still has plenty worth seeing in it. I just feel Hitchcock has over- rated what he was up to in Psycho.

I found more sustained excitement in Irving Lerner's Murder by Contract ('X' certificate). One of the American 'B' films showing in the Beat. Square and Cool season at the National Film Theatre. Cool is just the word for it: the emo- tional temperature • is creepily low, everything chillingly understated. What makes the un- detectable murder? A stranger killing a stranger. So a man is hired to kill who looks (and officially is) perfectly respectable: a man with no police record, no reason for any of his murders. This cheaply-made film without stars is as tight and tough as they come: streamlined, but not slick. I thought it self-conscious, but not pretentious: a constant pleasure to watch, and a lesson in timing, economy, and control; and explosively exciting. Vince Edwards is the murderer: good- looking, a 'nice' face, even a trustworthy one, with that straight-eyed look.

Few novelists film as disastrously as John O'Hara; From the Terrace (director: Mark Rob- son; 'A' certificate) has everything that makes for overblown filming: every giant clichd you can think of. Paul Newman, Joanne Woodward and Myrna Loy all impossibly cast and wasted.

Y ou've hung it upside down.'