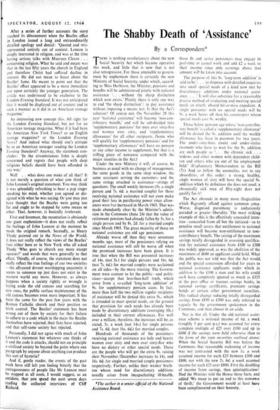 The Shabby Death of 'Assistance'

THERE is nothing revolutionary about the new Social Security Act which became operative this week, and little that is new that is not also retrogressive. For those amenable to govern- ment by euphemism there is certainly the new Ministry of Social Security, under which, accord- ing to Miss Herbison, the Minister, pensions and benefits will be administered jointly with national assistance '. . . without the sharp distinction which now exists.' Plainly there is only one way to end 'the sharp distinction': to jiay assistance without imposing a means test. Is that the Act's solution? Of course not. On November 28 this year 'national assistance' will become 'non-con- tributory benefit,' and will be sub-divided into 'supplementary pensions' for men over sixty-five and women over sixty, and 'supplementary allowances' for all other recipients. (Some who will qualify for 'supplementary pensions' and for 'supplementary allowances' will have no pension or any other income to supplement, but that is a trifling piece of nonsense compared with the major inanities in the Act.)

Under the new Ministry it will, of course, be business as usual with no change of management, the same goods in the same shop window, the same assistants serving the customers and the same strings attached to assistance-strings of questions. The small weekly increases (5s. a single person and 7s. 6d. a married couple) for those receiving national assistance will not even make good their loss in purchasing power since allow- ances were last increased in March 1965. That was made abundantly clear by the Minister's admis- sion in the Commons (June 24) that the value of retirement pensions had already fallen by 5s. for a single person and by 8s. 2d. for a married couple since March 1965. The great majority of those on national assistance are old age pensioners.

Hundreds of thousands of the pensioners receiving national assistance are hale and hearty women over sixty and men over sixty-five who have no dietary or other special needs. Those are the people who will get the extra 9s. raising their November/December increases to 14s. and 16s. 6d. for single and married couple pensioners respectively. Further, unlike their weaker breth- ren whose need for discretionary additions usually arises from incapacitating ill-health, ..*The author is a senior Official of the National Assistance Board. those fit and active pensioners may engage in part-time or casual work and add £2 a week to their income since only earnings above that amount will be taken into account.

The purpose of this 9s. long-term addition' is said to be . . to dispense with detailed enquiries into small special needs of a kind now met by discretionary additions under national assist- ance. . . It will also substitute for a reasonably precise method of evaluating and meeting special needs an utterly absurd hit-or-miss expedient. A single 'pensioner with no special needs will be 9s. a week better off than his counterpart whose special needs cost 9s. weekly.

Those below pension age whose 'non-contribu- tory benefit' is called a 'supplementary allowance' will be denied the 9s. addition until the weekly allowance has been in payment for two years. The under-sixty-fives (men) and under-sixties (women) who have to wait for the 9s. addition

are such people as . . the chronic sick . . . widows and other women with dependent child- ren and others who are out of the employment field.' (Explanatory Memorandum to the Bill (7).) And so follow the anomalies, not to say absurdities, of this order: a strong, healthy, single woman of sixty will have the special 9s. addition which by definition she does not need; a chronically sick man of fifty-eight does not qualify for it!

The Act abounds in many more illogicalities which flagrantly offend against common sense. Worse, disguised parsimony is audaciously paraded as greater liberality. The most striking example of this is the effectively concealed inten- tion-concealed from all but the initiated-so to penalise small savers that entitlement to national assistance will become non-entitlement to non- contributory benefit. The raising of the maximum savings totally disregarded in assessing qualifica- tion for national assistance from £100 to £300 was widely approved, as was the abolition of the maximum of /600 an applicant could hold. What the public was not told was that the Act would. end the special concession afforded for years to national assistance applicants under which in addition to the £100 a man and his wife could each have completely ignored as much as £375 in the post office or trustees savings banks, in. national savings certificates, premium savings bonds or certain other government securities. This radical change reducing totally disregarded savings from £850 to £300 was only referred to vaguely by the government spokesman in the Commons, and then almost in an aside.

Nor is that all. Under the old national assist- ance scheme a notional income of 6d. a week (roughly 5 per cent p.a.) was assumed for every complete multiple of £25 over £100 and up to £600 if the savings were held otherwise than in the form of the state securities outlined above: When the Social Security Bill was before the Commons that reasonable reckoning of income was not contrasted with the new Is. a week assumed income for each £25 between £300 and £800, nor with the new 2s. 6d. a week assumed-

income for each £25 over £800. First the doubling of income from savings, then quintuplication!

Had the Minister told the House those facts, arid added 'We mean to put an end to this nonsense of thrift,' the Government would at least have been complimented on their honesty,.