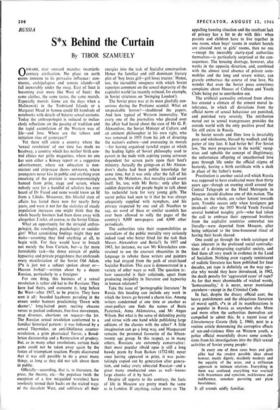 S*x Behind the Curtain

Yet there still exists a country where the 'sexual revolution' of our time has made no headway, a country which has neither birth con- trol clinics nor girlie magazines, where no one has seen either a Kinsey report or a suggestive advertisement, where sex education is non- existent and strip-tease shows unknown, where youngsters never kiss in public and anything even smacking of the prurient is uncompromisingly banned from print, stage and screen, where nobody save for a handful of scholars has ever heard of Dr Freud and none would know an Id from a Libido. Moreover, this blissful state of affairs has lasted there now for nearly forty years, and were it not for the statistics of steady population increases one might think that the whole beastly business had been done away with altogether. I refer, of course, to the Soviet Union.

What an opportunity for the intrepid anthro- pologist, the sexologist, psychologist or sociolo- gist! What astonishing findings might they not make—assuming they find anything at all, to begin with. For they would have to breach not merely the Iron Curtain, but—a far more formidable task—the dense curtain of public hypocrisy and private priggishness that enshrouds every manifestation of the Soviet Old Adam. Ssx is just not a subject spoken about or— Heaven forbid!—written about by a decent Russian, particularly to a foreigner.

For one thing, this business of a sexual revolution is rather old hat to the Russians. They have had theirs, and overcome it, long before the West—after 1917, to be precise. They have seen it all: bearded layabouts parading in the streets under banners proclaiming 'Down with shame!,' long-haired poets reciting obscene verses to packed audiences, free-love movements, snap divorces, abortions on request—the lot. The Russian sexual revolution conformed to a familiar historical pattern : it was followed by a sexual Thermidor, an anti-libidinous counter- revolution, a grim pharisaical Terror, a Bowd- lerian dictatorship and a Restoration of prudery. But, as in many other revolutions, certain basic gains could not be taken away again by the forces of triumphant reaction. People discovered that it was still possible to do a great many things, as long as they did not talk about them in public.

Officially—according, that is, to literature, the press, the theatre, etc.—the populace (with the exception of a few misguided wretches) have resolutely turned their backs on the wicked ways of the decadent West, and sublimate all their

energies into the task of Socialist construction. Hence the familiar and still dominant literary plot of 'boy loves girl—girl loves tractor.' Hence, too, the incredible smugness with which Soviet reporters comment on the sexual depravity of the capitalist world (as recently evinced, for example, in Soviet strictures on 'Swinging London').

The Soviet press was at its most gleefully cen- sorious during the Profumo scandal. What an unspeakable horror!—shuddered the papers. And how typical of Western immorality. Yet every one of the journalists who gloated over the affair had heard about the case of Mr G. F. Alexandrov, the Soviet Minister of Culture and an eminent philosopher in his own right, who was removed in 1955 from his job of directing the nation's culture—and overseeing its morals —for having organised tasteful orgies at which the leading lights of Soviet philosophy used to cavort in the nude with aspiring young actresses dependent for screen parts upon their host's ministry. Actually the goings-on at Mr Alexan- drov's dacha had been public knowledge for some time, but it was only after the fall of his patron, Mr Malenkov, that morality could assert itself. So, too, with Mr Beria: only after his sudden departure did people begin to talk about his recherche taste for very young girls. The secret police had seen to it that he was always adequately supplied with nymphets, and his privacy respected by one and all. Needless to say, no word of these or similar scandals has ever been allowed to sully the pages of the country's 9,000 newspapers and 4,000 other periodicals.

The authorities take their responsibilities as custodians of the public morality very seriously indeed (and who better fitted for the task than Messrs Alexandrov and Beria?). In 1957 and 1963, for instance, we saw Mr Khrushchev con- strained to use the coarsest obscenities in the language to rebuke those writers and painters who had strayed from the path of strait-laced Socialist Realism. This care is demonstrated in a variety of other ways as well. The question is: how successful is their solicitude, apart from producing insipidity in literature and hypocrisy in human relations?

Take the issue of 'pornographic literature.' In Russia this heading can include any work in which the lovers go beyond a chaste kiss. Among writers condemned at one time or another as smut-pedlars one finds the names of Boris Pasternak, Anna Akhmatova, and Mr Angus Wilson. But what is the sense of defending purity and virtue with one hand while publishing large editions of the classics with the other? A little imagination can go a long way, and Maupassant remains the perennial favourite of the fifteen- twenty age group. In this respect, as in many others, Russians are extremely conservative: their most popular ribald opus is still a long bawdy poem by Ivan Barkov (1732-68); never once having appeared in print, it was pains- takingly copied out by generation after genera- tion, and today every educated Russian—and a great many uneducated ones as well—knows large chunks of it by heart.

Despite all reports to the contrary, the facts of life in Moscow are pretty much the same as in London. If anything, rather more so. The

appalling housing situation and the resultant lack of privacy has a lot to do with this: when parents and children have to live together in one room, when boys' rooms in student hostels are situated next to girls' rooms, then no one —except the incurably starry-eyed authorities themselves—is particularly surprised at the con- sequences. The housing shortage, however, also works in the opposite direction, and, combined with the almost total absence of private auto- mobiles and the long and severe winter, can gravely embarrass the course of true love. No wonder that even the Soviet press sometimes complains about Houses of Culture and Youth Clubs being put to unorthodox use.

The artificial asexuality enforced from above has created a climate of the utmost moral in- tolerance, in which all deviations from the official norm of sexual behaviour are punished, and punished very severely. The retribution meted out to sexual transgressors provides the outside world with the only positive proof that Sin still exists in Russia.

In Soviet novels and films love is invariably pure and wholesome, blessed by wedlock and the patter of tiny feet. It had better be! For Soviet law, 'the most progressive in the world,' recog- nises and upholds the concept of illegitimacy; the unfortunate offspring of unauthorised love goes through life under the official stigma of bastardy, having a birth certificate with a dash in place of the father's name.

Prostitution is another social evil which Russia was supposed to have eradicated more than thirty years ago—though an evening stroll around the Central Telegraph or the Hotel Metropole in Moscow should disabuse one of this notion. The police, on the whole, are rather lenient towards tarts. Trouble occurs only when foreigners get involved: after the 1957 World Youth Festival several hundred naughty girls—who had taken the call to embrace their oppressed brothers from the capitalist countries somewhat too literally—were deported from Moscow, after being subjected to the time-honoured ritual of having their heads shaved.

One could go through the whole catalogue of vices inherent in the profound social contradic- tions of a disintegrating capitalist society, and find them all very much in evidence in the Land of Socialism. Nothing even vaguely reminiscent of sadistic literature has been published for four decades, yet rape is definitely on the way up— else why would they have introduced, in 1962, the death penalty for 'aggravated cases' of rape? As for that most abominable of wicked words, 'homosexuality,' it is never, never mentioned anywhere—except in the Criminal Code.

In fact, despite the dreary official cant, the heavy punishments and the ubiquitous literature of moral uplift, s*x in all its manifestations is as popular in Russia as anywhere else. More and more often the authorities themselves are compelled to admit this. In a recent issue of Literaturnaya Gazeta (July 2, 1966), next to a routine article denouncing the corruptive effects of sex-and-violence films on Western youth, a police official mournfully draws some conclu- sions from his investigations into the illicit sexual activities of Soviet young people: In every one of these cases boys and girls alike had the crudest possible ideas about honour, manly dignity, maidenly modesty and the equality of the sexes, and a utilitarian approach to intimate relations. Everything in them was confused, everything was overlaid with brazenness and cynicism, recklessness and indifference, senseless parroting and plain boorishness.

It all sounds oddly familiar.