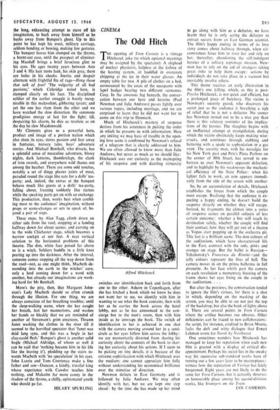 Much of Hitchcock's mastery of suspense derives from his astuteness in picking the order in which he presents us with information. Here any inkling we may have of trouble in the open- ing love scene is confirmed by Newman's refusal of a telegram that is clearly addressed to him. We are often allowed to know more than Julie Andrews, but never as much as we should like: Hitchcock uses our curiosity as the mainspring of his suspense and with dazzling virtuosity

switches our identification back and forth from one to the other. Ashore in Copenhagen, after she has fetched a book which we know he does not want her to see, we identify with him in wanting to see what the book contains, then with her as he carries the book across the hotel lobby, not as he has announced to the con- cierge but to the men's room, then with him inside as he unwraps the book. The switch of identification to her is achieved in one shot with the camera moving around her in a semi- circle as her eyes follow him across the lobby: we are momentarily diverted from sharing his curiosity about the contents of the book to shar- ing her curiosity about his actions. If I seem to be picking on tiny details, it is because of the extreme sophistication with which Hitchcock uses the medium; one cannot appreciate him fully without understanding his economical brilliance over the minutiae of direction.

Newman defects to East Germany and is followed by Julie Andrews. We may often identify with her, but we are kept one step ahead: by the time she has made up her mind

to go along with him as a defector, we have learnt that he is only acting the defector to extract secrets from an East German scientist. The film's happy ending in terms of its love story comes about halfway through, when cir- cumstances force him to trust her and rely on her; thereafter, abandoning the self-indulgent heroics of a solitary espionage mission, New- man has to rely on the aid of strangers taking great risks to help them escape: actions by individuals do not take place in a vacuum but inevitably involve others.

This theme receives an early illustration in the film's one killing, which, as this is post- Psycho Hitchcock, is not quick and efficient, but a prolonged piece of butchery. The victim is Newman's security guard, who discovers his secret just as the audience is breathing a sigh of relief that he is not a defector. No sooner has Newman turned out to be a nice guy than there is this salutary reminder of the implica- tions of the heroics. The slaughter begins with an ineffectual attempt at strangulation, during which the victim obstinately keeps making wise- cracks, and continues through stabbing and battering with a spade to asphyxiation in a gas oven. The security man, with his nostalgia for his New York past and Pete's Pizza Parlour on the corner of 88th Street, has served to em- barrass us over Newman's apparent defection, and to highlight by his weaknesses the mechani- cal efficiency of the State Police: when his lighter fails to work, an arm appears immedi- ately from the side of the screen with another. So, by an accumulation of details, Hitchcock establishes the forces from which the couple must escape. Realising that the audience is ex- pecting a happy ending, he doesn't build the suspense directly on whether they will escape. Instead, he fragments the climax into a series of suspense scenes on parallel subjects of less certain outcome: whether a bus will reach its destination safely, whether the couple will find their contact, how they will get out of a theatre as Vopos start popping up in the orchestra pit. This last is a brilliant scene. The dun colours of the auditorium, which have characterised life in the East, contrast with the reds, pinks and oranges on stage. But the ballet is Russian- Tchaikovsky's Francesca da Rimini—and the jolly colours represent the fires of hell. The camera moves in on the prima ballerina in full pirouette. As her face whirls past the camera on each revolution a momentary freezing of the frame shows her eyes fixing on the couple in the auditorium. . . .

But after the previews, the conversation tended to ignore the film's virtues, for there is a shot in which, depending on the masking of the screen, you may be able to see not just the top of the backdrop, but also the bank of lights above it. There are several points in Torn Curtain where the artifice becomes too obvious. Other deficiencies can be traced to new collaborators: the script, for instance, credited to Brian Moore, lacks the deft and witty dialogue that Ernest Lehman wrote for North by Northwest.

One sometimes wonders how Hitchcock has managed to keep his reputation when each new film is greeted with a display of critical dis- appointment. Perhaps his secret lies in the sneaky way his successive sub-standard works have of turning out a few years later to be masterpieces : witness how the reputation of Vertigo has lately burgeoned. Eight years are not likely to do the same for Torn Curtain, but it certainly deserves an honourable place among his second-division works, like Strangers on the Train.