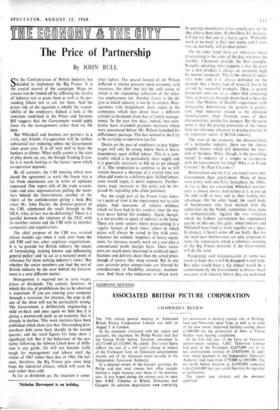 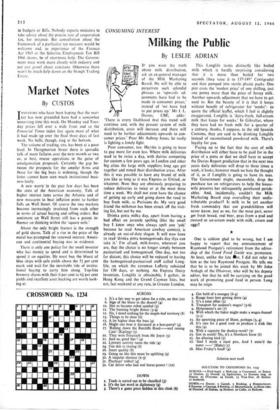 The Price of Partnership

So the Confederation of British Industry has decided to implement the Big Freeze. It is the crucial accord of the campaign. Wage in- creases can be fended off by stiffening the resolve of industry not to grant them as well as by per- suading labour not to ask for them. And the prices side of the equation is wholly the respon- sibility of the employers. Indeed, a look at the sanctions enshrined in the Prices and Incomes Bill suggests that the Government would apply force via the managements rather than via the men.

But Whitehall and business are partners in a crisis, not friends. Co-operation will be neither substantial nor enduring unless the Government takes great care. It is all very well to have the bankers to dinner. What really counts is the state of play down on, say, the Slough Trading Estate. So it is worth looking at the factors upon which co-operation depends.

By all accounts, the CBI meeting which pro- duced the agreement to work the freeze was a far from unanimous one in terms of opinions expressed. One report tells of the trade associa- tions and area representatives pulling the mem- bers - behind the Government, another of the elders of the confederation giving a lead. But when Mr. John Davies, the director-general of the CBI, telephoned the result through to the DEA, what in fact was he delivering? There is a parallel between the relations of the TUC with its member unions and the CBI with its member companies and organisations.

The chief purpose of the CBI was restated eleven months ago when it took over from the old FBI and two other employer organisations. It is 'to provide for British industry the means of formulating, making known and influencing general policy' and 'to act as a national point of reference for those seeking industry's views.' But whether the senior members can lead the rest of British industry by the nose behind the Govern- ment is a very different matter. .

Management is required not to raise wages, prices or dividends. The context, however, in which this trio of prohibitions has to be observed is important. If you are steering your company through a recession, for instance, the urge to do any of the three will not be particularly strong. The Government is deliberately engineering a mild set-back and once again we find that it is giving a downwards push to an economy that is already in decline. This week statistics haye been published which show just that. Outstanding hire- purchase debt came back sharply in the second quarter, and the retail figures for June show a significant fall. But if the behaviour of the eco- nomy following the Selwyn Lloyd dose of defla- tion is any guide, life will not become really tough for management and labour until the winter of 1967 rather than that of 1966. On bal- ance, therefore, the Big Freeze gets some help from the industrial climate, which will soon be cool rather than cold.

As far as dividends go, the situation is some- Nicholas Davenport is on holiday.

what tighter. The special feature of the Wilson deflation is intense pressure upon company cash resources, the chief but not the only cause of which is the impending collection of the selec- tive employment tax. Another factor is the de- gree to which industry is run by its owners. Man- agements with insignificant share stakes_ in the companies which they direct have a different attitude to dividends from that of family manage- ments. In the past few days, indeed, two com- panies have rescinded payment increases which were announced before Mr. Wilson launched his deflationary package. This has seemed to the City to be carrying co-operation too far.

Desire on the part of employers to pay higher wages will only be strong where there is heavy dependence upon skilled labour. This is a com- modity which is in particularly short supply and it is generally necessary to bid up to get enough of it. The temptation to continue to do so will remain because a shortage at a crucial time can often add weeks to a delivery date. Skilled labour, some would argue, is never expensive. Further- more, wage increases at this point can be dis- guised by regrading jobs often genuinely.

No, the tough part of the Freeze from indus- try's point of view is the requirement not to raise prices. And recessions of relative mildness which we have had in this country since the war have never halted this tendency. Again, though, it is not possible to speak of industry in the lump. There are some sectors where price-cutting is a regular feature of hard times; others in which prices will always be raised in line with costs, whatever the outlook. Suppliers of heavy equip- ment, for instance, usually work on a cost plus a conventional profit margin basis. Their custo- mers are much more interested in technical speci- fications and delivery dates than the actual price, though of course they shop around. But in any case accurate price comparisons are blurred by considerations of flexibility, accuracy, mainten- ance. And those who endeavour to obtain work by quoting uneconomic prices usually give up the idea after a short time. Shipbuilders, for instance, will not try that one in a hurry again. 'Profitable work or no work' is their new motto, and if costs rise, so, normally, will product prices.

On the other hand there are industries where price-cutting is the order of the day, whatever the weather. Chemicals provide the best example. Roughly speaking, what happens is that the price for a new product is always set extremely high by normal standards. This is the chemical indus- try's habit and it is always defended on the grounds that a heavy load of research has to be carried by successful products. Then, as patent protection runs out, or as others find competing lines, so prices arc brought down hard to beat the rivals. The Minister of Health's experiences with tetracycline demonstrate the pattern to perfec- tion. And industries related to the chemical manufacturers often illustrate some of their characteristics, textiles for instance. But the main point is that the pricing provisions of the freeze have no relevance whatever to pricing practice in an important sector of British industry.

The state of the economy, the characteristics of a particular industry, these are the almost tangible factors which will determine the reac- tion of business. What, though, is the prevailing mood? Is industry of a temper to co-operate with the Government for long? Who is its Frank Cousins? Sir Paul Chambers?

Businessmen and the City are much more anti- Government than anti-Labour. Many of them were pretty well anti-Tory throughout the 1960s. As far as they are concerned, Whitehall interfer- ence is almost always bad (unless it is to put up the odd tariff or two) and to their trading dis- advantage. On the other hand, the small body of businessmen who have worked with the authorities on the Neddy committees have done so enthusiastically. Against the vast irritation which the Labour government has engendered can be set this one, tiny gain: when industry and Whitehall have tried to -work together on a speci- fic project, it hasn't come off too badly. But for the main part businessmen are only prepared to make the concessions which a voluntary working of the Big Freeze demands if the Government will do the same.

Postponing steel nationalisation (it seems too much to hope that it will be dropped) would help. But what would have a big impact would be a commitment by the Government to discuss fiscal measures with industry before they are enshrined in budgets or Bills. Nobody expects ministers to take advice about the precise rate of corporation tax, for instance. But consultation about the framework of a particular tax measure would be welcome and, as experience of the Finance Act 1965 or the Selective Employment Tax Bill 1966 shows, be of enormous help. The Govern- ment must work more closely with industry and not just growl about sanctions. Otherwise there won't be much help down on the Slough Trading Estate.