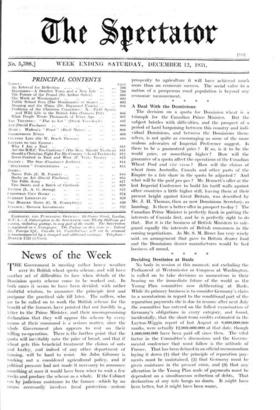 MIE Government is meeting rather heavy weather over its British wheat quota scheme, and will have another set of difficulties to face when details of the Dominion quota scheme come to be worked out. In both cases it seems to have been decided. with rather doubtful wisdom, to announce the principle first and postpone the practical side till later. The millers, who are to he called on to work the British scheme for the benefit of the farmers, have pointed that out forcibly in a letter to the Prime Minister, and their uncompromising declaration that they will oppose the scheme by every means at their command is a serious matter, since the whole Government plan appears to rest on their willing co-operation. There is the further point that the quota will inevitably raise the price of bread, and that if Wheat gets this beneficial treatment the claims of oats and barley, and indeed of any other department of farming, will be hard to resist. Sir John Gilmour is working out a considered agricultural policy, and if political pressure had not made it necessary to announce something at .9rice it would have, been wiser to wait a few weeks and -produce the.scheme as a whole. If the Cabinet can by judieious assistance to the farmer—which by no means necessarily involves fiscal protection—restore prosperity to agriculture it will have achieved much mom than an economic success. The social value to a nation of a prosperous rural population is beyond any economic measurement.