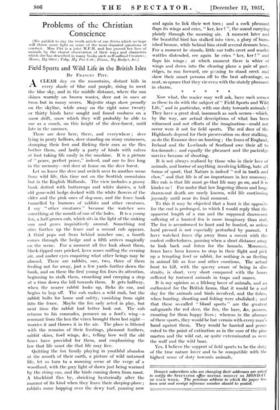 [We publish to-day the tenth article of our series which we hope will throw some light on some of the most disputed questions of conduct. Miss Pitt is a joint M.P.H. and has proved her love of animals by the closest observation of their ways and characters which she has described in many books such asW oodland Creatures; Moses, My Otter; Toby, My Fax-Cub; Diana, My Badger, &c.]

Field Sports and Wild Life in the British Isles

ACLEAR day on the mountains, distant hills in every shade of blue and purple, rising to meet the blue sky, and in the middle distance, where the sun shines warmly on brown wastes, deer not in ones or twos but in many scores. Majestic stags show proudly on the skyline, while away on the right some twenty or thirty hinds have sought and found coolness on a snow drift, snow which they will probably be able to use as a couch, on this height of the deer-forest, until late in the summer.

There are deer here, there, and everywhere ; deer lying in peaty hollows, deer standing on stony eminences, stamping their feet and flicking their ears as the flies bother them, and lastly a party of hinds with calves at foot taking lift easily in the sunshine. It is a picture of " peace, perfect peace," indeed, and one to live long in the memory—red deer at home on the deer forest.

Let us leave the deer and switch over to another scene from wild life, this time not on the Scottish mountains but in the English Midlands. The view includes a grassy bank dotted with buttercups and white daisies, a tall old gone-wild hedge decked with the white flowers of the elder and the pink ones of dog-rose, and the fence bank tunnelled by burrows of rabbits and other creatures. I say " other creatures " because the watcher sees something at the mouth of one of the holes. It is a young fox, a half-grown cub, which sits in the light of the sinking sun and gazes inquisitively around. Something red stirs further up the fence and a second cub appears. A third pops out from behind number one, a fourth comes through the hedge and a fifth arrives magically on the scene. For a moment all five look about them, black-tipped ears pricked, keen noses sniffing the evening air, and amber eyes enquiring what other beings may be abroad. There are rabbits, one, two, three of them feeding not far away, just a few yards further down the hank, and on these the first young fox fixes its attention, beginning to stalk them, crouching and creeping a step at a time down the hill towards them. It gets halfway, when the nearer rabbit looks up, flicks its ear, and begins to hop off. The cub makes a wild rush, but the rabbit bolts for home and safety, vanishing from sight into the fence. Maybe the fox only acted in play, but next time the rabbit had better look out. The cub returns to his comrades, pounces on a fowl's wing—a remnant from the lien the vixen brought them last night— worries it and throws it in the air. The place is littered with the remains of their feastings, pheasant feathers, rabbit skins, fowl wings, &c., telling how well the old foxes have provided for them, and emphasizing the law that life must die that life may live.

Quitting the fox family playing in youthful abandon at the mouth of their earth, a picture of wild untamed life, let us turn to a morning scene at the verge of a woodland, with the grey light of dawn just being warmed by the rising sun, and the birds coming down from roost. A blackbird flies by, shrieking hysterically after the manner of its kind when .they leave their sleeping-place ; rabbits conic hopping over the dewy turf, pausing, now and again to lick their wet toes ; and a cock pheasant flaps its wings and cries, " ker, ker ! ", the sound carrying plainly through the morning air. A moment later and the beautiful bird has stalked into view, a glory of burn- ished bronze, while behind him stroll several demure hens. For a moment he stands, little ear tufts erect and scarlet wattles distended, ere again he cries " ker, ker ! " and flaps his wings ; at which moment there is whirr of wings and down into the clearing plane a pair of part- ridges, to run forward, ere pausing to stand erect and show their smart persons off to the best advantage, so neat, so spruce that they vie even with the stately pheasant in charm.