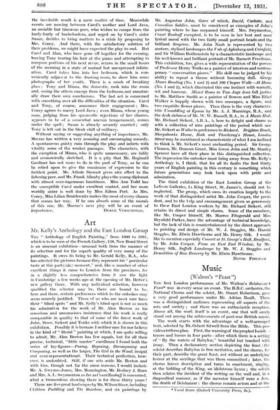 TUE " Anthology of English Painting," from 1900 to 1931, which is to be seen at the French Gallery, 158, New Bond Street is an unusual exhibition—unusual both from the manner of its selection and for the superb quality of very many of the paintings. It owes its being to Mr. Gerald Kelly, R.A., who has selected the pictures because they represent his " particular taste at this particula: moment," and, like a number of other excellent things it came to London from the provinces, for in a slightly less comprehensive form it saw the light in Cambridge a few weeks ago at the opening of Mr. Heffer's new gallery there. With any individual selection, however qualified the selector may be, there are bound to be, here and there, certain preferences which to the onlooker may seem scarcely justified. Those of us who are most sure have their " blind spots " and Mr. Kelly's blind spot is not so much his admiration for the work of Mr. Alan Beeton as his conscious and unconsciot's insistence that his work is really comparable in quality to that of some of the finest work of John, Steer, Sickert and Tonics with which it is shown in this exhibition. Possibly it is because I neither-care for nor believe in the kind of " literal " painting at which, I am quite willing to admit; Mr. Alan Beeton has few equals, but for all their precise, technical, "little master" excellence I found both the series of lay-figures—Posing, Reposing, Decomposing" and Composing, as well as the larger, The Girl in the Wood; insipid and over-representational. Their technical perfection, how- ever, is undoubted. Still, if one sets aside Mr. Beeton - and with him, though not for the same reasons, I would include Mr. A. Gwynne-Jones, Mrs. Monnington, Mr. Rodney J. Burn and Mrs. A. L. Swynnerton as far asCountZoubuff is concerned, what a tremendous showing there is for these thirty years !

There are five mat landscapes by Mr. Wilson Steer, including Children Paddling and The Rainbow, and six paintings by

Mr. Augustus John, three of which, David, Carlotta, and Canadian Soldier, must be considered as examples of John's painting where he has surpassed himself. Mrs. Swynnerton, Count Zaubuff excepted, is to be seen in her best and most lyrical mood with the two fairly small portrait heads and the brilliant Seapiece. Mr. John Nash is represented by two austere, stylised landscapes the Vale ofAylesbury and Cornfield, and Sir William Rothen.stein by a characteristic landscape and his well-known and brilliant portrait of Mr. Barnett Freedinan. This exhibition, too, gives a wide representation of the powers of Professor Henry Tonks as a painter of interiors and contem- porary " conversation pieces." His skill can be judged by his ability to repeat a theme without becoming dull. George Moore Reading (No. 1 and 2) and 109 Cheyne Walk—At Home (No. 1 and 2), which illustrated this one instinct with warmth, wit and humour. Mixed Roses in Two Jugs does full justice. to Mr. Matthew Smith as a painter of :flowers and Miss Ethel Walker is happily shown with two seascapes, a figure, and two exquisite flower pieces. Then there is the very character- istic Unsaddling at Epsom by Mr. A. J. Munnings, R.A., and the dark richness of Mr. W. W. Russell, R.A., in A Music Hall. Mr. Richard Sickert, A.R.A., is here to delight and charm us with a collection of nine paintings of the period which saw Mr. Siekert as ll'alter in preference to Richard. Brighton Beach, Sheepshanks House, Bath and Thackeray's House, London Street may be mentioned as characteristic of what I am inclined to think is Mr. Sickert's most enchanting period. Sir George Clausen, Mr. Duncan Grant, Miss Gwen John and Mr. Stanley Spencer have all their place in this distinguished collection. The impression the onlooker must bring away from Mr. Kelly's Anthology is, I think, that for all its faults the first thirty years of English painting in this century is something which future generations may look back upon with pride and admiration.

The third exhibition of the East London Group at the Lefevre Galleries, lA King Street, St. James's, should not be neglected. The group, which owes its creation largely to the work of that distinguished artist Mr. John Cooper, the presi- dent, and to the Lelp and encouragement given so generously to these East London workers by Mr. Richard Siekert, still retains its direct and simple charm. Some of the members, like Mr. Cooper himself, Mr. Murroe Fitzgerald and Miss Brynhild Parker, have the advantage of technical knowledge, but the lack of this is counterbalanced by the direct approach to painting and design of Mr. W. J. Steggles, Mr. Harold Steggles, Mr. Elwin Hawthorne and Mr. Henry Silk. I would like to mention especially Concert at St. George's Hall, Bradford, by Mr. John Cooper, From an East End Window, by Mr. Henry Silk, Suffolk Landscape by Mr. W. J. Steggles and Demolition of Bow Brewery by Mr. Elwin Hawthorne. DAVID FINC HA NI