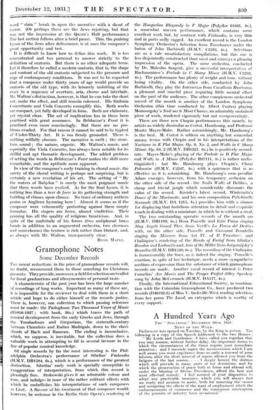 Tut: recent reductions in the price of gramophone records will no doubt, recommend them to those searching for Christmas presents. They provide, moreover, a field for selection unrivalled for fiscal graduations and idiosyncrasies of personal taste.

A characteristic of the past year has been the large number of recordings of long works. Important as many of these are it is impossible for the reviewer to deal with them in a short article and hope to do either himself or the records justice. There is, however, one collection to which passing reference must be made : the Parlophone Two Thousand Years of Music (R1016-1027 ; with book, 36s.) which traces the path of musical development from the early Greeks and Jews, through the Troubadours and Gregorians, 'the sixteenth-century German Choralists and Italian Madrigals, down to the clavi- Chords of Bach and Rameau. The ending is inconclusive, Which, we suppose, is inevitable, but the collection does a Valuable work in attempting to fill in several lacunae in the line of popular musical knowledge.

Of single records by far the most interesting is the Phil- adelphia Orchestra's performance of Sibelius' Finlandia (H.M.V. DB1584, Os.), which is a performance of the greatest distinction. Sibelius' early work is specially susceptible to exaggeration of interpretation, from which this record is pleasingly free. Stokowski gives it an admirable colour and tone, and indulges in none of the rather militant effects with Which he 'embellishes his interpretations of such composers as Liszt. A flavour of his treatment of' that composer would, however, be welcome in the Berlin State Opera's rendering of

the Hungarian Rhapsody in F Major (Polydor 61661, 4s.), a somewhat uneven performance, which contains some excellent work but, by contrast with Finlandia, is very thin and in parts sadly ragged. An excellent record is the London Symphony Orchestra's Selection from Tannhauser under the baton of John Barbirolli (H.M.V. C2293, 4s.). Selections are as a rule unsatisfactory compilations, but this one is less disjointedly constructed than most and conveys a pleasing impression of the opera. The same orchestra, conducted by Dr. Malcolm Sargent, give a successful interpretation of Rachmaninov's Prelude in C Sharp Minor (H.M.V. C2292, 4s.). The performance has plenty of weight and tone, without losing vitality. On the other side, conducted by John Barbirolli, they play the Intermezzo from Cavalleria Rusticana, a pleasant and tuneful piece requiring little mental effort on the part of the audience. The other conspicuous orchestral record of the month is another of the London Symphony Orchestra (this time conducted by Albert Coates) playing Moussorgsky's Nuit sur le Mont Chance, an admirably sustained piece of work, rendered vigorously but not overpoweringly.

There are three new Chopin performances this month, by artists as widely dissimilar as Cortot, Hambourg, and Professor Moritz Mayer-Mater. Rather astonishingly, Mr. Hambourg's is the best. M. Cortot is seldom on anything but somewhat uneasy terms with Chopin and in his interpretations of the Nocturne in E Flat Major, Op. 9, No. 2, and Waltz in C Sharp Minor, Op. 64, 2 (H.M.V. DB1321, Os.) he is positively second- rate. Mayer-Mahr's playing of the Prelude in D Flat Major and Waltz in A Minor (Polydor B67111, 4s.) is rather undis- tinguished : but Mr. Hambourg plays Chopin's Chant Polonaise (H.M.V. C2247, 4s.) with a quietness that is as effective as it is astonishing. Mr. Hambourg's own peculiar Adam emerges, however, from his temporary seclusion on the other side of the record—the Naila Waltz of Delibes, a cheap and trivial jangle which considerably discounts the value of the record. Kreisler's latest record, Winternitz's Dance of the Marionette, and his own composition Polichinelle Serenade (H.M.V. DA 1215, 4s.) provides him with a chance for displaying that fastidious attention to detail and exquisite touch in dealing with a miniature, in which he is without a rival.

The two outstanding operatic records of the month arc (H.M.V. DB1199, Os.) Rosa Ponselle and Ezio Pinza singing May Angels Guard Thee, from Verdi's La Fonza del Destiim with, on the other side, Ponselle and Giovanni Zenatello singing the Miscrere from Act IV. of It Trovatore: and Chaliapine's rendering of the Rondo of Farlaf from Glinka's Russian and Lztdomila and Aria of the Miller from Jargomijsky's Rossalka (H.M.V. DB1530, Os.). The recording of the Chaliapine is immeasurably the finer, as is indeed the singing. • Ponselle's emotion, in spite of her technique, needs a more sympathet.;c medium of expression than the substance of which gramophone records are made. Another vocal record of interest is Peter Cornelius' Ave Maria and The Prayer Perfect (Oley Speaks). sung by John McCormack (H.M.V. DA117, 4s.).

Finally, the International Educational Society, in combina- tion with the Columbia Gramophone Co., have produced two records (D40192-3) of Miss V. Sackville-West reading selections from her poem The Land, an enterprise which is worthy of every support.