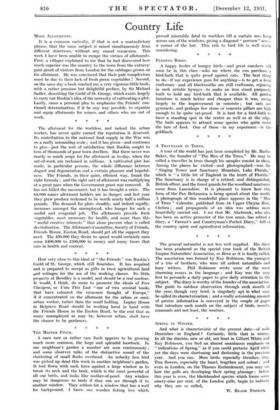 Page 16, 12 December 1931 — The allotment for the workless, and indeed the urban worker,
Close

The allotment for the workless, and indeed the urban worker,

has never quite earned the reputation it deserved. Its contribution to the national food supply in the War was on a really astounding scale ; and it has given—and continues to give—just the sort of satisfaction that Ruskin sought to tens of thousands of poor town dwellers. But there never was nearly so much scope for the allotment as to-day, when the out-of-work are reckoned in millions. A cultivated plot has made, in particular persons, the whole difference between disgust and degeneration and a certain pleasure and hopeful- ness. The Friends, in their quiet, efficient way, found the right formula ; and the right sort of allotment was multiplying at a great pace when the Government grant was removed. It has not killed the movement, but it has brought a crisis. The 64,000 miner allotment holders are in danger, and last year they grew produce reckoned to be worth nearly half a million pounds. The demand for plots steadily, and indeed rapidly, increases amongst the unemployed, who hunger for such a useful and congenial job. The allotments provide fresh vegetables, most necessary for health, and more than this " useful creative interests " that alone prevent what is called devitalization. The Allotments Committee, Society of Friends, Friends House, Euston Road, should get all the support they need. The £30,000 they desire to spend would certainly earn some £400,000 to /500,000 in money and many times that sum in health and content.