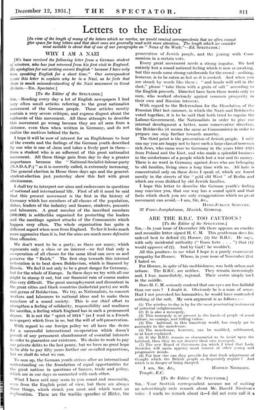 [To the Editor of the SPECTATOR.] SIR,—In your issue of December 5th there appears an erudite and recondite letter signed H. C. M. This gentleman does his unlevel best to defend (1) Horace, (2) the B.B.C. He says, with only incidental authority (" Ibam forte . . . ") that (1) would approve of (2). And by Gad ! he wouldn't.

All this produces in me what I hope is a purely evanescent sympathy for Horace. Whom, in your issue of November 21st I hated so.

For Horace, in spite of his snobbishness, was both urban and urbane. The B.B.C. are neither. They remain increasingly and, I fear, immediately, regional. Their centre simply isn't in the middle.

Does H. C. M. seriously contend that our eyes are less faithful than our ears ? I doubt it. Obviciusly he is a man of sense. Had I not provoked his humanities, he would have contended nothing of the sort. My own argument is as follows :—

( I) The wireless to-day is by far the most penetrating instrument of potential enlightenment.

(2) It is also a monopoly. (3) This monopoly is at present in the hands of people of scant culture, no courage, and frilling vision. (4) The habitual, in this transitory world, has simply got to surrender to the unwelcome.

(5) The unwelcome, however, can be modified, sublimated, or at least explained. (6) If the B.B.C. remain so obscurantist as to insist upon the habitual, then they do not deserve their own monopoly. (7) The new Board of Governors (on which I trust that Lady Snowden will again appear) must consist of other young and progressive minds.

(8) For how else can they provide for that fresh adjustment of thought which the British people so desperately require ? And which is in danger of being damped.