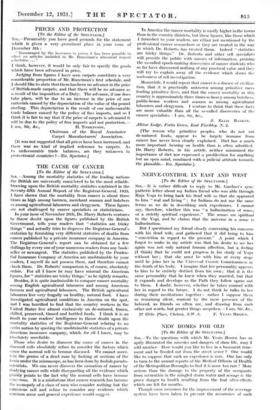 NERVE-CONTROL IN EAST AND WEST [To the Editor of the

SPLYTA TOR.] SIR,—It is rather difficult to reply to Mr. Gardner's sym- pathetic letter about my Indian friend who was able through Raja Yoga to bring back his dead wife so that she appeared to him " real and living " ; for Indians do not use the same terms as we do in describing such experiences. I cannot say, therefore, whether this was " a hallucination of sense. or a strictly spiritual experience." The senses are spiritual to the Yogi, and he claims that the universe in a sense ix hallucination.

But I questioned my friend closely concerning his converse with his dead wife, and gathered that it did bring to him " conviction in regard to the present." A point which I forgot to make in my article was that his desire to see her again was not only natural human affection, but a feeling (I think) that he could not progress in his study of Yoga without her ; that she must be with him at every stage until he joins her in the Universal Cosmic Consciousness at the death of his body. I imagine that her personality appears to him to be entirely distinct from his own ; that it is the same personality that he knew when they married, but that it expands and develops as the Path they follow opens out to them. I doubt, however, whether he takes counsel with her in regard to the future. I do not think he talks to her during their meditations together : rather I suppose thou as remaining silent, content by the mere presence of the beloved, as Mends so often are, and drawing from each other not words, but greater things unspoken.—I am, Sir, &e.,