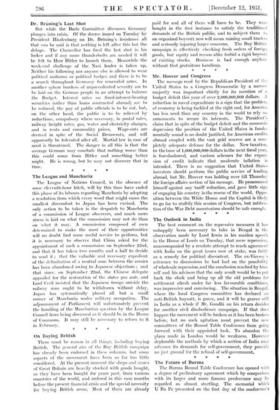 Page 2, 12 December 1931 — Mr. Hoover and Congress The message read by the Republican
Close

Mr. Hoover and Congress The message read by the Republican

President of ti United States to a Congress Democratic by a narrow majority was important chiefly for its mention of a budget deficit this year of over 2,000,000,000 dollars. A reduction in naval expenditure is a sign that the problem of economy is being tackled at the right end, for America has less need than any country in the world to rely on armaments to secure its interests. The President's claim that in spite of the budget deficit and the economic depresSion the position of the United Slates is funda- mentally sound is. no doubt justified, for American credits abroad coupled with the vast gold reserve are a com- pletely adequate defence for the dollar. New taxation, to the tune of 1,000,000,000 dollars in the next fiscal year, is foreshadowed, and various schemes for the expan- sion of credit indicate that moderate inflation is intended. There is no suggestion that United States investors should perform the public service of lending abroad, but Mr. Hoover was holding over till Thursday the foreign affairs section of his message. He pronounced himself against any tariff reduction, and gave little sign of engaging his country in the rescue of the world. Oppo- sition.ietween the. White House and the Capitol is likely to go far to stultify this session of Congress, but ratifica- tion of the War Debt moratorium should be safe enough. * * * *