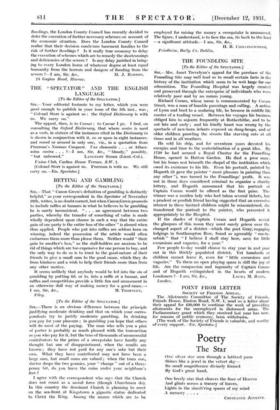 SIR,—There is an obvious difference between the principle justifying moderate drinking and that on which your corres- pondents try to justify moderate gambling. In drinking you pay for your pleasure ; in gambling you hope that others will do most of the paying. The man who sells you a pint of porter is probably as much pleased with the transaction as you who pay for it, but the tens of thousands of unsuccessful contributors to the prizes of a sweepstake have hardly any thought but one of disappointment,. when the results are known ; they have not paid for any one's sake but their own. What they have contributed may not have been a . large sum, hut small sums are valued ; when the tram cop. ductor drops the two pennies, your " change " out of a three- penny bit, do you leave the coins under your neighbour's feet ?

I agree with the correspondent who says that the Church does not count as a moral force (though Churchmen do). In this country the dominant Church is planning to erect on the sea-front at Kingstown a gigantic statue dedicated to Christ the King. Among the means which arc to be

employed for raising the money a sweepstake is announced. The figure, I understand,- is to face the sea, its back to the land —a significant attitude.—I am, Sir, &e., H. R. CUILLINGWORTII.