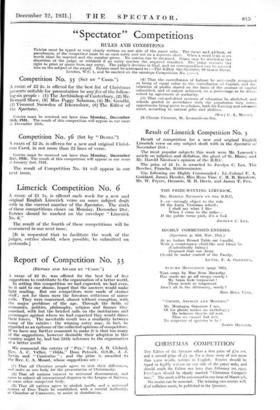 RULES AND CONDITIONS Entries must be typed or very clearly written on one side of the paper only. The name and address, or pseudonym, of the competitor must be on each entry and not on a separate shoot. When a word limit is sea words must be counted and the number given. No entries can be returned. Prizes trisy ba divided at tits discretion of the judge, or withheld if no entry reaches the required standard. The judge reserves the right to print or quote from any entry. The judge's decision is final, and no correspondence can be ontaro into on the subject of the award. Entries must be addressed to :—The Editor. the Spectator, 99 Gowor Street.

Competition No. 35 (SET BY " CARD.") A rniz.t of £2 2s. is offered for the best list of ChristmaS presents suitable for presentation to any five of the follow ing six people : (1) The Archbishop of Canterbury, (2) Mr. Bernard Shaw, (8) Miss Peggy Salaman, (4) Mr. Gandhi, (5) Viscount Snowden of Ickornshaw, (6) The Editor of the Spectator.

Entries must be received not later than Monday, December 14th, 1931. The result of this competition will appear in our issue of December 26th.

Entries must be received not later than Monday, December 21st, 1931: The result of this competition will appear in our issue of January 2nd,, 1932.

The result. of Competition No. 34 will appear in our next issue.

Limerick Competition No. 6 A PRIZE of £1 ls. is offered .each week for, a new and original English Limerick verse on some subject *dealt with in the current number of the Simetator. The sixth of these competitions closes on Monday, December 21st. Entries should be marked on the envelope " Limerick No. 6."

The, result of the fourth of these competitions will be announced in our next issue.

[It is. requested that to facilitate . the work of the judges, entries should, when possible, be submitted on postcards.] . - Report of Competition' No. 33

A PRIZE of £2 2s. was offered for the best list of five suggestions to contribute to the organization of a better World. In setting this competition we had expected, we had even, he it said to our shame, hoped that the answers would make light reading. But our competitors were made of sterner stuff ; not for them were the frivolous criticisms of minor evils. TheY were Concerned; almost without exception, with the major problems of the age. Through the fields of economics, politics, philosophy, religion and finance they marched, with but the briefest calls on the institutions and personages against whom we had expected they would direct I heir forces. The inevitable result was a similarity between many of the entries : the winning entry may, in fact, be regarded as an epitome of the collected opinions of competitors. If we have any further comment to make it is that too many of the suggestions, however desirable their adoption in this country might be, had but little reference to the organization of a better world.

(I) That all Christian people agree to sink their differences, and unite as one body for the presentation of Christianity.

(2) That- all nations consent to universal disarmament, and agree to submit all international disputes to the League of Nations,

or some other competent body. . • . . . . . (3) That all nations agree to abolish tariffs, and a universal system of Free Trade be established, with a central Authority, or Chamber of 'Commerce, to assist in distribution. (4) That the contribution of Labour be universally recognized as being of equal value to the contribution of Capital, and dis- tribution of profits shared on the basis of the tunount of capital subscribed, and of output achieved, on a percentage to be deter- mined by agreement or authority.

(5) That cut-and-dried systems of education be abolished, and schools graded in accordance with the population they serve, opportunity being given to scholars, both for learning and advance- ment, according to natural gifts and abilities.

Result of Limerick Competition No. 3 Result of competition for a new and original English Limerick verse on any subject dealt with in the Oectaior of November 21st :

The most popular subjects this week were Mr. Leacock's article on inflation and deflation, the ghost of St. Blaise, and Mr. Harold Nicolson's opinion of the B.B.C.

The prize of £1 ls. is awarded to Jocelyn C. Lea, The Beeches, Franche, Kidderminster.

THE PRIZE-WINNING LIMERICK. MR. HAROLD NICOLSON ON THE B.B.C.

I—er—strongly object to the rule Of the Early Victorian school ; I shall say what I like When I come to the mike— If the public turns pink, it's a fool.

At an Indian Round Table sat Gandhi, With a countenance child-like and bland ho (Undoubtedly balmy) Proposed that our Army Should bo under control of tho Pandy.

That essay by Miss Rose Macaulay Has made mo go all creepy-crawly My brain feels torpescent I Those words so turgescent Aren't all in tho dictionary, surely MISS ROSA VINE.

Of his ghosts makes an anthology ;

He believes they're all real,

Thus wo cannot but feel, No respecter of spectres is he ! JAMES RENDER.