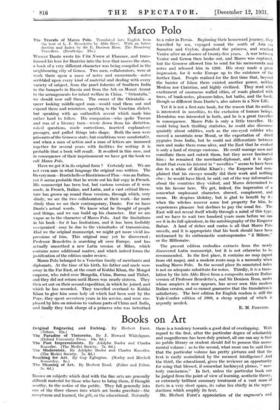 The Modernists. By Adolphe Basler and Charles Kunstler. .(The Medici Society. 7s. 8d.)

BOOKS on subjeats which deal with the fine arts are generally difficult material for those who have to bring them, if thought worthy, to the notice of the public. They- fall generally into one of the three classes into which art -books graviiate—the sumptuous and learned, the gift, or the educational: Naturally there is a tendency towards a good deal of overlapping. With regard to the first, after the particular degree of scholarship and magnificence has been duly praised, all one can say is that no public library or student should fail to possess this monu- mental volume : as to the second, what more can be said than that the particular volume has pretty pictures and that the text is easily assimilated by the meanest intelligence? And the third, the educational, gives the reviewer an opportunity for using that blessed, if somewhat hackneyed phrase, " mas- terly conciseness." In fact, unless the particular book can be judged from the point of view of learning, aesthetic theory, or extremely brilliant summary treatment of a vast mass of facts in a very short space, its value lies chiefly in the repro- ductions which amplify its text.

Mr. Herbert Furst's appreciation of the engraver's and eteher's art partakes, in the best sense, of all three classes. It is based on a vast amount of learning, the information is concise without being skimped, and the reproductions are admirably selected and are generously provided. His object has been to produce a book which should be of material assistance to everyone who is interested in prints. After the print enthusiast has read Mr. A. M. Hind's Short History and Mr. E. S. Lumsden's Art of Etching, he then finds that his enthusiasm is tempered by the great difficulties of seeing originals or of studying those monographs which reproduce originals. There are, as Mr. Furst points out, a number of such monographs available, but as they deal with circum- .cribed areas or periods it is extremely difficult for the inquirer to gain a comprehensive and bird's eye view of the whole history of the art of engraving. Mr. Furst selects typical examples of all schools from the beginnings of print-making, as we know it, in 1400 or thereabout, down to modern times, and those who are learned, not less than those who desire in- formation or love beautiful things, should unite in tendering their thanks to him.

Mr. Whitehouse, in The Paradise of Tintoretto, has written a delightful appreciation of all that this magnificent painting has meant to him. He describes the painting in elaborate details and supplies photographs of details which are almost impossible to come by. Those who have been rushed through the Great •Conneil Hall of the Doge's Palace in Venice may have wondered secretly whether this vast smoky canvas was really all it has been " cracked up " to be. I commend Mr. White- house's book to all those who have suffered this almost universal disappointment.

The next two books are frankly informative, and their in- formation is supplied by seventy-two photogravtires in either volume. Their purpose—and our thanks are due to the Medici Society for their enterprise—is to give some sort of sheet-anchor to the large number of people who are frankly bewildered not only by the post-impressionists but even more by the modern schools which have followed them. Both books are translations from the French of M. Adolphe Basler and M. CharleS Kunstler. The text is rather obviously a trans- lation, but the material is excellent, and the illustrations about as good as could be desired. They should be invaluable educational aids not only to the French Exhibition at Bur- lington House but also to the foreign collections at Milbank.

Mr. Guy Eglington's little book is a.collection of essays, all dealing with matters connected with artistic appreciation. It is so modest and unassuming that it is likely to be neglected, and that would be a great pity. Mr. Eglington died rather tragically fn 1928, and his death is the more to be regretted because there are few people who can write as .enchantingly and learnedly about the pictures which have moved him to admiration. I commend this little book especially for the two essays on that great French primitive Enguerrand Charon- ton (whoie great "Coronation of the Virgin," at Villeneuve- les-Avignon is to be seen shortly at Burlington House) and for his devastating and brilliant suggestions in the essay, " To- wards a New Museum." The Meaning of Art, by Mr. Herbert Head, is definitely instructive and very sound instruction too. It consists of a synthesis of the series of articles which he con- tributed to the Listener, the weekly journal of the B.B.C. Mr. Read is to be congratulated for having had the happy thought of making his articles a permanent contribution to