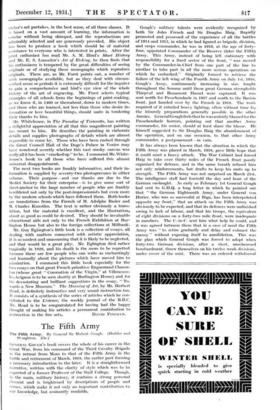 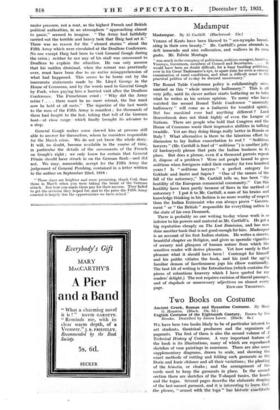 GENERAL Goren's book covers the whole of his career in the Great War, fromhis command of the Third Cavalry Brigade in the retreat troth 'Min's to that of the Fifth Army in the battle and retirement of March, 1918, the earlier part forming a necessary introduction to the later. It. is a straightforward narrative, iviitten with the clarity of style which was to be expected of a former Professor of the Staff College. Though, in the main, military hisfork, it contains a strong personal element and is brightened by descriptions of people and scenes,' which make it not only an important contribution to our knowledge, but eminently readable.

Gough's military talents were evidently recognized by both Sir John French and Sir Douglas Haig. Rapidly promoted and possessed of the experience of all the battles of 1914 and 1915, in which he had figured as brigade, division, and corps commander, he was in 1916, at the age of forty- four, appointed Commander of the Reserve (later the Fifth) Army. This Army, instead of being left stationary with responsibility for a fixed sector of the front, " was moved by the Commander-in-Chief from one part of the line to another to take part in all the more serious operations on which he embarked." Originally formed to retrieve the failure of the left wing of the Fourth Army on July 1st, 1916, Gough's Army, continuously increasing in size, fought throughout the Somme until those great German strongholds Thiepval and Beaumont Hamel were captured. It was sent north for Passchendaele in 1917 and south to the Barisis front, just handed over by the French in 1918. The work required of it entailed heavy fighting, often without time for the leisurely preparations generally possible in the other Armies. General Gough feels that he was unfairly blamed for the Passchendaele horrors, pointing out that another Army commander, his senior, should at least share the blame. He himself suggested to Sir Douglas Haig the abandonment of the operation, and on one occasion, to that other Army commander, a postponement—in vain.

It has always been known that the situation in which the Fifth Army was placed in March, 1918, gave little hope that it could meet a heavy attack. The War Cabinet had forced Haig to take over thirty miles of the French front poorly organized for defence, and in the same breath refused him not only reinforcements, but drafts to keep his units up to strength. The Fifth Army was not surprised on March 21st. The intelligence staff had foretold the day and hour of the German onslaught. As early as February 1st General Gough had sent to G.H.Q. a long letter in which he pointed out that " the German Eighteenth Army, under General von Hutier, who was so successful at Riga, has been interpolated opposite my front," that an attack on the Fifth Army was obviously to be expected, and that its defences were unfinished owing to lack of labour, and that his troops, the equivalent of eight divisions on a forty-two mile front, were inadequate in numbers. The C.-in-C. sent him what help he could, and it was agreed between them that in a case of need the Fifth ArmY was " to retire gradually and delay and exhaust the enemy " without exposing itself to annihilation. This was the plan which General Gough was forced to adopt when forty-two German divisions, after a short, unrehearsed bombardment, threw themselves on his twelve weak divisions, under cover of the mist. There was an ordered withdrawal under pressure, not a rout, as the highest French and British political authorities, in an atmosphere " approaching almost to panic," seemed to imagine. The Army had faithfully carried out the terrible and heavy. task that Haig had set it." There was no reason for the absurd stories " about the Fifth Army which were circulated at the Doullens Conference. No one except Haig had been to visit General Gough during the crisis ; neither he nor any of his staff was summoned to Doullens to explain the situation. He can only assume that his sudden dismissal, when the retreat was practically over, must have been due to an entire misapprehension of what had happened. This seems to be borne out by the inaccurate statements made by Mr. Lloyd George in the House of Commons, and by the words used to General Gough by Foch, when paying him a hurried visit after the Doullens Conference. The Frenchman cried : Why did the Army retire ? . . . there must be no more retreat, the line must now be held at all costs." The injustice of the last words to the men of the Fifth Army is manifest ; for thousands of them had fought to the last, taking that toll of the German host—at close range—which finally brought its advance to a stop.

General Gough makes some shrewd hits at persons still able to answer for themselves, whom he considers responsible for the March crisis. We do not yet know the whole story. It will, no doubt, become available in the course of time, in particular the details of the movements of the French on Gough's right ; we only know for certain that General Main should have struck in on the German flank—and did not. We may, meanwhile, accept for the Fifth Army the judgement of General Pershing, contained in a letter written to the author on September 22nd, 1918 :

" These days are brighter and more promising, thank God, than those in March when you were taking the brunt of the German attack. But how you made them pay for their success. They failed to get the decision they hoped for, and to the price the Fifth Army exacted is largely due the opportunities we have seized."