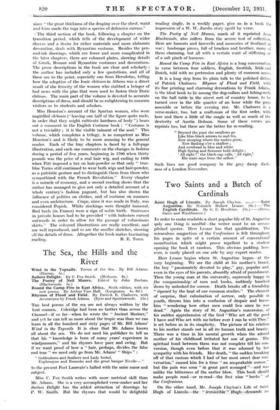 The Sea, the Hills and the River Sailors Delight. By

C. Fox Smith. (Methuen. 6s.) The Poetry of Neil Munro. Edited by John Buchan. (Black-woods. 5s.) Round the Camp Fire in East Africa. Sixth edition, with six new poems. By Arthur Vine Hall. (Longman. 4s. 6d.) Rhymes of Flood and Field. By Patrick R. Chalmers, with Tim best poems of the sea are not always written by the best seamen. Coleridge had been no farther than across the ChannelŌĆöif so farŌĆöwhen he wrote the " Ancient Mariner," and yet he can tell us more about the tropic seas than we can learn in all the hundred and sixty pages of Mr. Bill Adams' Wind in the Topsails It is clear that Mr. Adams knows all about the sea. We do not need his publisher to tell us that his " knowledge is born of many years' experience in windjammers," and his rhymes have pace and swing. But if we want proof of how a " hair, perhaps, divides the false and true " we need only go from Mr. Adams' " Ships " : " Goldenhom and Seafarer and Lady Isobel,

Euphrosyne and Roanoke and the great barque Nivelle-- "

to the present Poet Laureate's ballad with the same name and subject.

Miss C. Fox Smith writes with more metrical skill than Mr. Adams. She is a very accomplished verse-maker and her Sailors Delight has the added attraction of drawings by Is. W. Smith. But the rhymes that would be 'delightful reading singly, in a weekly paper, give us in a book the impression of a W. W. Jacobs story spoilt by verse.

The Poetry of Neil Munro, much of it reprinted from Blackwoods, also suffers from the severe test of collection. Here are laments and farewells and memories of Scotland at war ; landscape pieces, full of bracken and heather, many oE them charming, but all with a certain want of stiffening or of a salt pinch of humour.

Round the Camp Fire in East Africa is a long conversation in verse between four soldiers, English, Scottish, Irish and Dutch, told with no pretension and plenty of common sense., It is a long step from its plain talk to the polished ditties of Patrick Chalmers. Rhymes of Flood and Field, with its fine printing and charming decorations by Frank Adams, is the ideal book to lie among the dog-collars and fishing-reels on the hall table in the nicest sort of country house, to be turned over in the idle quarter of an hour while the guns assemble or before the evening rise. Mr. Chalmers is a verse-maker, too, but a craftsman of the first order, with here and there a little of the magic as well as much of the dexterity of Austin Dobson. Some of these verses are reprints too, but these are the better for re-reading.

" Beyond the punt the swallows go

Like blue-black arrows to and fro, Now stooping where the rushes grow, Now flashing o'er a shallow ; And overhead in blue and white High Spring and Summer hold delight ; All right ! ' the black-cap calls, All right,' Hifi mate says from the sallow."

Such lines are good company in the grey damp dark. ness of a London November.