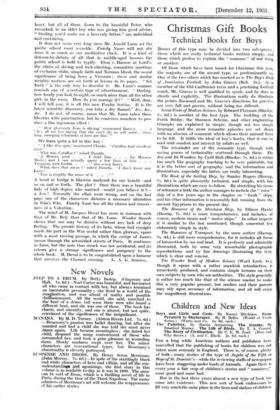 Boons of this type may be divided into two sub-species ; those which are really technical books written simply, and those which profess to explain the romance " of one thing or another.

Of those which have been issued for Christmas this year, the majority are of the second type, or predominantly so. One of the two others which has reached us is The Boy's Book of Association Football, by John Graves (Bell. 5s.). As a member of the Old Carthusian team_ and a practising football coach, Mr. Graves is well qualified to speak, and he does so clearly and explicitly. The illustrations really do illustrate the points discussed and Mr. GraveS's directions for pra2tice are very full and precise, without being too difficult.

Great Feats of Modern Science, by Edward Flaxman (Blaekie, 7s. 6d.) is another of the first type. _ The building of the Forth Bridge, the Shannon Scheme, and other engineering triumphs are explained in • simple; 'though not too simple language, and the more romantic episodes are set down with an absence of comment which allows their natural force to be felt. It fulfils the ideal of boy's books, that it can be read with comfort and interest by adults as well.

The remainder are of the romantic type, though with saving graces of technicality scattered through them. The Sea and Its Wonders, by Cyril Hall (Blackie, 7s. 6d.) is rather too much like geography teaching to be very palatable, but it is the better sort of geography, and the information and illustrations, especially the latter, are really interesting.

The Book of the Sailing Ship, by Stanley Rogers (Harrap, 7s. 6d.) is quite pleasantly technical, and simple, with line illustrations which are easy to follow. By stretching his terms of reference a little the author manages to include the " rotor " ship of a few years ago in the chapter on " freak " ships, and his other information is reasonably full, running from the ancient Egyptians to the present day.

The Romance of the Merchant Ship, by Ellison Hawks (Harrap, 7s. 6d.) is more comprehensive, and includes, of course, modern steam and " motor ships." In other respects it is similar to the last mentioned, though somewhat less elaborately simple in style.

The Romance of Transport, by the same author (Harrap, 7s. 6d.) is still more comprehensive, for it includes all forms of locomotion by sea and land. It is profusely and admirably illustrated, both by some very remarkable photographic reproductions and by line drawings illustrating the text, which is clear and concise.

The Wonder Book of Modern Science (Ward Lock, 6s.), though it opens with a rather mawkish introduction, is remarkably produced, and contains simple lectures on their own subjects by men who are authorities. The style generally is rather too much like that of the science master to make this a very popular present, but readers and their parents may rely upon accuracy of information, and all will enjoy the magnificent illustrations.