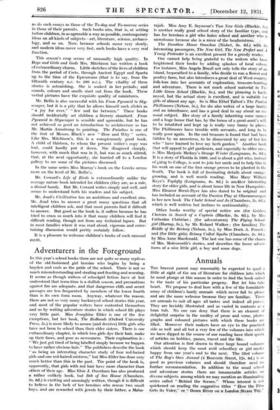 Adventurers in the Foreground

IN this year's school books there are not quite so many replicas of the old-fashioned girl heroine who begins by being a hoyden and ends as the pride of the school. There is not so much misimderstanding and stealing and feasting and rescuing. It seems as though writers of schoolgirl fiction have at last understood that term-time is a dullish season, and precautions against fire are adequate, and that dangerous cliffs and secret passages are less frequented by members of the lower fourth than is its own form room. Anyway, whatever the reason, there are not so very many hackneyed school stories this year, and most of the popular writers have contented themselves and us by writing adventure stories in which school life plays very little part. Miss Josephine Elder is one of the few exceptions, but her book, The Redheads (Oxford University Press, 5s.) is more likely to amuse (and deceive) little girls who have not been to school than their elder sisters. There is one extraordinary chapter, in which two girls dye their hair, make up their faces, and pose as newcomers. Their explanation is " We just got tired of being labeHed simply because we happen to have rather obvious hair." The publishers describe the book as being an interesting character study of four red-haired girls and one red-haired mistress," but Miss Elder has done very much better than this in the past. The point of the book is, apparently, that girls with red hair have more character than others of their age. Miss Elsie J. Oxenham has also produced a rather unlikely book, but Deb of Sea House (Chambers, 8s. 6d.) is exciting and amusingly written, though it is difficult to believe in the luck of her heroines who rescue two small bilys, and are rewarded with jewels by- their father, a Naha- rajah. Miss Amy E. Seymour's Two New Girls (Blackie, 5s.) is another really good school story of the familiar type, and has for heroines a girl who hates school and another who is unwelcome because she is a niece of the headmistress.

The Dorothea Moore Omnibus (Nisbet, 8s. 6d.) with its interesting passengers, The New Girl, The New Prefect and A Young Pretender is an excellent present for a greedy reader.

One cannot -help being grateful to the writers who have brightened their books by adding splashes of local colour. For instance, Miss Angela Brazil not only tells the story of an island, bequeathed to a family, whO decide to run a flower and poultry farm, but also introduces a great deal of West-country folk-lore into her accounts of exploration, treasure-hunting and adventure. There is not much school material in Thr Little Green School (Blackie, 5s.), and the phrasing is hack- neyed, but the actual story is excellent, and is suitable for girls of almost any age. So is Miss Ethel Talbot's The Foolish Phillimores (Nelson, 5s.), for she also writes of a large family and an inheritance, and has a good deal to say about an un- usual subject. Her story of a family inheriting some money and a huge house that has, by the terms of a great-aunt's will, to be inhabited and kept up is really very funny in places. The Phillimores have trouble with servants, and long to be really poor again. In the end treasure is found that had been hidden by an ancestress, to be discovered by any of her kin who " have learned to love my herb garden." Another book that will appeal to girl gardeners, and especially to older ones, is Miss Marjorie Medary's Orange Ifinter (Longmans, 8s. 6d.). It is a story of Florida in 1880, and is about a girl who, instead of going to College, is sent to join her uncle and to help him in his work on one of the first orange groves to be planted in the South. The book is full of fascinating details about orange- growing, and is well worth reading. Miss Mary Willard Keye's Toplofty (Longmans, 8s. 6d.) is ancther interesting story for older girls, and is about home life in New Hampshire. Miss Eleanor Brent-Dyer has also dared to be original, and has included an account of the Passion Play at Oberammergau in her new book The Chalet School and Jo (Chambers, 3s. 64.), which is well written but inclines to sentimentality.

Other books worthy of special notice are (for Guides) Cherries in Search of a Captain (Blackie, 3s. 6d.), by Miss Catherine Christian; (for adventurers) The Flying School- girl (Harrap, 5s.), by Mr. Roland Walker ; (for families) The Riddle of the Rectory (Nelson, 5s.), by Miss Doris A. Pocock : and (for little girls) Briony Called Squibs (Chambers, 2s. 6d.), by Miss Anne Macdonald. The last one has some of the charm of Mrs. Molesworth's stories, and describes the home adven- tures of a nice little girl, a boy and some dogs.,