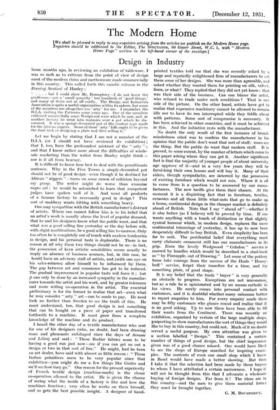 We shall be pleased to reply to any enquiries arising from the articles we publish on the Modern Home page. Inquiries should be addressed to the Editor, The SPECTATOR, 99 Gower Street, W.C. 1, with " Modern Home Page" written in the left-hand corner of the envelope.]

SObEE months ago, in reviewing an exhibition of tableware, I was so rash as to criticize from the point of view of design

most of the modern china and earthenware made commercially in this country. This called forth this caustic column in the Evening Sentinel of Hanley :

. . . . but I could show Mr. Boumphrey—I do not know the gentleman—not a ' small quantity ' but hundreds of ` good things,' and many of thorn not at all costly. The Design and Industries Association is quite a useful organization within its sphere, but some of the members are altogether too ` arty' for me. I remember the D.I.A. visiting the Potteries some years ago. One of the members criticized unmercifully some Wedgwood ware which ho saw, and at another factory he went into ecstasies over a pot which he dis• covered. It was a sponge-decorated pot of the crudest type made for the African niggers. Some of those arty' folkought to be given the dual task of designing a plate and then selling it."

Let me begin by stating that I am not a member of the D.I.A. (or I should not have reviewed its exhibition) ; that I, too, have the profoundest mistrust of the " arty ;

nor is it all from hearsay.

It is difficult to know how best to deal with the penultimate sentence. Why in the Five Towns a simply-decorated pot should not be of good design—even though it be destined for African " niggers "—turns on some canon of criticism' beyond my grasp. The writer might do worse than examine negro art : he would be astonished to learn that competent judges have spoken well of it. And must all products of a famous factory be necessarily good in design ? This sort of snobbery wants hitting with something heavy.

One may sympathize with the British manufacturer's distrust of artists. Where one cannot follow him is in his belief that an artist's work is usually above the level of popular demand, that he and his designers know what the public want, and that what was a good selling line yesterday or the day before will, with slight modifications, be a good selling line to-morrow. Only too often he is completely out of touch with modern tendencies in design, and his personal taste is deplorable. There is no reason at all why these two things should not be so—in fact, the possession of keen artistic sensibilities seems usually to imply an absence of business acumen, but, in this case, he hould have an advisory staff of artists, and (with one eye on his sales-returns) allow himself to be influenced by them. The gap between art and commerce has got to be reduced. The gradual improvement in popular taste will force it ; but it can only be done by an increased sympathy in the manufac- turer towards the artist and his work, and by greater tolerance and more willing co-operation in the artist. The essential

preliminary is for the former to realize that art—even what he may consider " arty " art—can be made to pay. He need look no farther than Sweden to see the truth of this. He must understand, too, that good design is not something that can be bought on a piece of paper and transferred

forthwith to a machine. It must grow from a complete knowledge of the machine and its product.

I heard the other day of a textile manufacturer who sent for one of his designers (who, no doubt, had been drawing roses and pheasants enfoliaged since the days of Sesame and Lilies) and said : " Those Rodier fabrics seem to be having a good run just now—see if you can get us out a design or two in that sort of line." He might, had he been an art dealer, have said with almost as little reason : " Those Italian primitives seem to be very popular since that exhibition—you might do me a few things like Giotto and we'll see how they go." One reason for the present superiority of French textile design (machine-made) is the closer co-operation allowed to the artist. He is given the chance of seeing what the inside of a factory is like and how the machines function ; very often he works on them himself, and so gets the best possible insight A designer of hand-

printed textiles told me that she was recently asked by a large and reputedly enlightened firm of manufacturers to sell them some of her designs. She was more than agreeable, and asked whether they wanted them for printing on silk, velvet, linen, or what ? They replied that they did not yet know : that was their side of the business. Can one blame the artist, who refused to trade under such conditions ? That is one side of the picture. On the other hand, artists have got to realize that expensive machinery cannot be allowed to remain idle nor to have its run interrupted while they fiddle about with patterns. Some sort of compromise is necessary. It has been achieved in other countries, and it must be achieved in this. And the initiative rests with the manufacturer.

No doubt the only result of the first instance of broad- mindedness cited was to confirm the manufacturer in his opinion that the public don't want that sort of stuff: roses are the thing. But the public do want that modern stuff. It is proved, to some extent, by the number of letters which come to this paper asking where they can get it. Another significant fact is that the majority of younger people of about university age approve of it—and in a very few years they will be furnishing their own houses and will buy it. Many of their elders, thongh sympathetic, are deterred by the possession of existing furniture which would not mix. Where it is all to come from is a question to be answered by our manu- facturers. The new tariffs give them their chance. At the moment it is a dispiriting fact that in furniture, textiles, ceramics and all those little what-nots that go to make up a home, continental design in the cheaper market is definitely ahead of British. Note that I say " ahead of "—whether it is also better (as I believe) will be proved by time. If one wants anything with a touch of distinction or that slightly cynical humour which, in modern design, replaces the more sentimental trimmings of yesterday, it has up to now been desperately difficult to buy British. Even simplicity has been far to seek. The pestilential belief that everything must carry elaborate ornament still has our manufacturers in its grip. Even the lovely Wedgwood " Celadon " service is marred by handles which would be described in a stud-book as " by Pineapple, out of Drawing." Let some of the pottery firms take courage from the success of the Heals " Honey- buff " service, forget their transfers for a time, and try something plain, of good shape.

It is my belief that the trade " buyer " is very generally an obstacle to progress. Exceptions are not uncommon, but as a rule he is opinionated and by no means catholic in his views. He rarely comes into personal contact with customers, and it is doubtful whether many salesman bother to report enquiries to him. For every enquiry made there may be fifty customers who glance round and realize that it is no good asking. Up to now these have been able to fill their wants from the Continent. There was recently an exhibition, organized by certain of the large multiple shops, purporting to show manufacturers the sort of things they would like to buy in this country, but could not. Much of it no doubt served a useful purpose. My own attention was given to a section labelled " Design." This contained a certain number of things of good design, but the chief impression given was of a good chance missed. One would have liked to see the shops of Europe searched for inspiring exam- ples. The contents of even one small shop which I know in Basel would have made a better showing. But then I take it that the selection had been made by those buyers to whom I have attributed a certain narrowness. I hope it will not be thought from this that I advocate a wholesale buying of foreign designs. Far from it ! The ideas are in this country—and the men to give them material form they must be brought together.