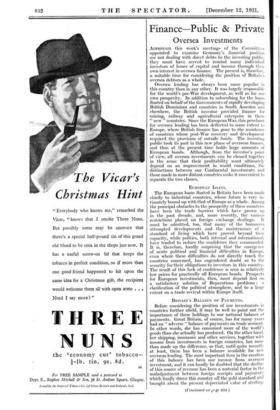 The European loans floated in Britain have been made chiefly to industrial countries, whose future is very in- timately bound up with that of Europe as a whole. Among the principal obstacles to the prosperity of these countries have been the trade barriers which have grown up in the past decade, and, more recently, the various restrictions placed on foreign exchange dealings. It must be admitted, too, that many of the borrowers attempted developments and the maintenance of a standard of living which have proved beyond their capacity, while politics, both internal and international, have tended to reduce the confidence they commanded. It is, therefore, hardly surprising that the emergence of acute political and financial difficulties in Europe, even where these difficulties do not directly touch the countries concerned, has engendered doubt as to the security for their obligations to investors in this country. The result of this lack of confidence is seen in relatively low prices for practically all European bonds. Prospects for European investments, then, must depend first on a satisfactory solution of Reparations problems ; a clarification of the political atmosphere, and to a large extent on a trade revival within Europe itself.