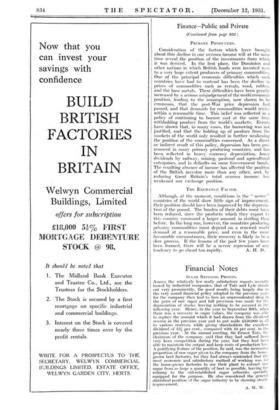 Consideration of the factors which have brought about this decline in our oversea income will at the same time reveal the position of the- investments from which it was derived. In the "first place, the Dominion and other nations in which British funds were invested were to a very large extent producers of primary commodities. One of the principal economic difficulties which such countries have had to contend has been the decline in prices of commodities such as • cereals, wool, rubber, and the base metals. TheSe difficulties have'been 'greatly increased by a serious misjudgement of the world economic position, leading to the assumption, now shown to be erroneous, that the post-War price depression had passed, and that demands for commodities would revive within a reasonable time. - This belief was reflected in a policy of continuing to borrow. and at the sane tune withholding produce from the world's markets. Events . have shown that, in many. cases, the borrowing was not justified, and that the holding up of produce from the markets of the world only resulted in further weakening the poSition of the commodities concerned. As a direct or indirect result of this policy, depression has been pro- nounced in many primary producing countries, and has been reflected in heavy currency depreciation, lower dividends by railway, mining, pastoral and agricultural enterprises, and in defaults on some Government bonds. The resulting absence of income has affected the position of the British investor more than any other, and, by reducing Great Britain's total oversea income, has weakened our exchange position.