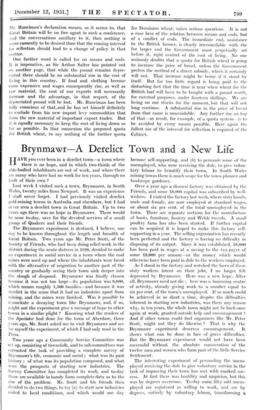 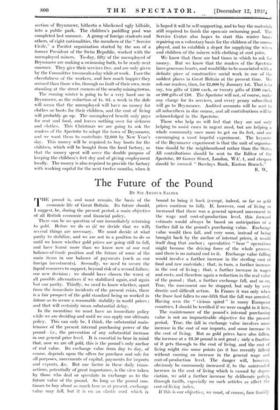 HAVE you ever been in a derelict town—a town where there is no hope, and in which two-thirds of the able-bodied inhabitants arc out of work, and where there are many who have had no work for ten years, through no fault of their own ?

Last week I visited such a town, Brynmawr, in South Wales, twenty miles from Newport. It was an experience I shall never forget. I had previously visited derelict gold-mining towns in Australia and elsewhere, but I had never seen a derelict town in Great Britain. Up to two years ago there was no hope in Brynmawr. There would be none to-day, save for the devoted services of a small group of Quakers and their friends.

The Brynmawr experiment is destined, I believe, one day to be known throughout the length and breadth of Great Britain. Two years ago Mr. Peter Scott, of the Society of Friends, who had been doing relief-work in the district during the acute distress in 1928, decided to make an experiment in social service in a town where the coal mines were used up and where the inhabitants were faced with the alternative of migration to another part of the country or gradually seeing their town sink deeper into the slough of despond. Brynmawr was finally chosen because it was not too large—its population was 8,000, which means roughly 1,500 families—and because it was derelict in the sense that it had no industries apart from mining, and the mines were finished. Was it possible to resuscitate a decaying town like Brynmawr, and, if so, might not the experiment give a message of hope to other towns in a similar plight ? Knowing what the readers of the Spei.tator had done for the town of Aberdare, three years ago, Mr. Scott asked me to visit Brynmawr and see for myself the experiment, of which I had only read in the Press.

Two years ago a Community Service Committee was het up, consisting of townsfolk, and to sub-committees was entrusted the task of providing a complete survey of Brynmawr's life, economic and social ; what was its past history of what was its population composed, and what were the prospects of starting new industries. The Survey Committee has completed its work, and to-day there are available in handy form complete data as to the size of the problem. Mr. Scott and his friends then decided to do two things, to try (a) to start new industries suited to local conditions, and which would one day become self-supporting, and (b) to persuade sonic of the unemployed, who were receiving the dole, to give volun- tary labour to beautify their town. In South Wales mining towns there is much scope for the town-planner and landscape gardener.

Over a year ago a disused factory was obtained by the Friends, and some £8,000 capital was subscribed by well- wishers. I visited the factory last week, where sixty hands, male and female, are now employed at standard wages, or about six per cent. of the total unemployed in the town. There are separate sections for the manufacture of boots, furniture, hosiery and Welsh tweeds. A small poultry farm has also been started. If further capital can be acquired it is hoped to make this factory self- supporting in a year. The selling organization has recently been perfected and the factory is having no difficulty in disposing of its output. Since it was established, £8,000 has been paid in wages at a saving to the tax-payer of some £3,000 per annum—or the money which would otherwise have been paid in dole to the workers employed.

As I stood in the factory and watched the faces of these sixty workers intent on their jobs, I no longer felt depressed by Brynmawr. Here was a new hope. After all, Brynmawr need not die ; here was a humming centre of activity, already giving work to a number equal to six per cent. of the town's unemployed. If so much could be achieved in so short a time, despite the difficulties inherent in starting new industries, was there any reason why, in ten years, the whole town might not be back once again at work, granted outside help and encouragement ? And if other towns could find organizers like Mr. Peter Scott, might not they do likewise ? That is why the Brynmawr experiment deserves encouragement. It shows what can be done in face of grave difficulties. But the Brynmawr experiment would not have been successful without the absolute consecration of the twelve men and women who form part of the little Service Settlement.

The interesting experiment of persuading the unem- ployed receiving the dole to give voluntary service in the task of improving their town has met with marked suc- cess. At first there was hostility and suspicion, but this was by degrees overcome. To-day some fifty odd unem- ployed are registered as willing to work, and arc by degrees, entirely by voluntary labour, transforming a section of Brynmawr, hitherto a blackened ugly hillside, into a public park. The children's paddling pool was completed last summer. A group of foreign students and others, of eight nationalities, the members of the " Service Civile," a Pacifist organization started by the son of a former President of the Swiss Republic, worked with the unemployed miners. To-day, fifty of the unemployed of Brynmawr are making a swimming bath, to be ready next summer. They give their services free, and are only given by the Committee two meals a day while at work. I saw the cheerfulness of the workers, and how much happier they seemed than those who, through no fault of their own, were standing at the street corners of the nearby mining towns.

The coming winter is going to be a very hard one in Brynmawr, as the reduction of ls. 9d. a week in the dole will mean that the unemployed will have no money for clothes or boots for their children, and the cost of living will probably go up. The unemployed benefit only pays for rent and food, and leaves nothing over for sickness and clothes. This Christmas we are going to ask the readers of the Spectator to adopt the town of Brynmawr, and we want them to contribute £2,000 by New Year's day. This money will be _required _to buy boots for the children, which will be bought from the local factory, so that the money spent will serve the double- purpose of keeping the children's feet dry and of giving employment locally. The money is also required to provide the factory with working capital for the next twelve months, when it is hoped it will be self-supporting, and to buy the materials still required to finish the open-air swimming pool. The Service Centre also hopes to start this winter boot- repairing on a voluntary basis for the children of the unem- ployed, and to establish a depot for supplying the wives and children of the miners with clothing at cost price.

We know that these are bad times in which to ask for money. But we know that the readers of the Spa taw have generous hearts, and would like to be associated with a definite piece of constructive social work in one of the saddest places in Great Britain at the present time. We ask our readers, then, for £2,000 by January 1st. That is to say, ten gifts of £200 each, or twenty gifts of £100 each, or 200 gifts of £10. The Spectator will not,. of course, make any charge for its services, and every penny subscribed will go to Brynmawr. Audited accounts will be sent to all subscribers in due course, and all contributions will he acknowledged in the Spectator.

Those who help us will feel that they are not only helping to assist cases in urgent need, but are helping a whole community once more to get on its feet, and are encouraging a most hopeful experiment. The keynote of the Brynmawr experiment is that the unit of organisa- tion should be the neighbourhood rather than the State. All contributions should be sent to the Editor of the Spectator, 99 Gower Street, London, W.C. 1, and cheques should be crossed " Barclays Bank, Euston Branch."