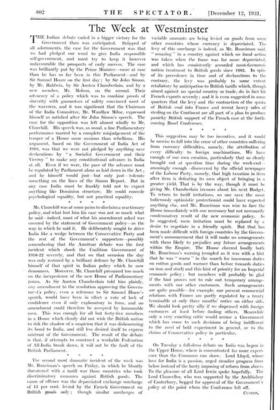 THE Indian debate ended in a bigger victory for the Government than was anticipated. Stripped of all adornments, the case for the Government was that we had pledged our word to give India responsible self-government, and must try to keep it however unfavourable the prospects of early success. The case was brilliantly put by the Prime Minister—more at ease than he has so far been in this Parliament—and by Sir Samuel Hoare on the first day ; by Sir John Simon, by Mr. Baldwin, by Sir Austen Chamberlain, and by a new member, Mr. Molson, on the second. Their advocacy of a policy which was to combine proofs of sincerity with guarantees of safety convinced most of the waverers, and it was significant that the Chairman of the India Committee, Mr. Wardlaw Milne, expressed himself as satisfied after Sir John Simon's speech. The case for the opposition was left almost wholly to Mr. Churchill. His speech was, as usual, a fine Parliamentary performance marred by a complete misjudgement of the temper of a House more anxious than rebellious. His argument, based on the Government of India Act of 1919, was that we were not pledged by anything save declarations by " a Socialist Government and their Viceroy " to make any constitutional advance in India at all. Even if we were, the pace of the advance must be regulated by Parliament alone as laid down in the Act ; and he himself would just—but only just—tolerate something on the lines of the Simon Report. But in any case India must be frankly told not to expect anything like Dominion structure. He could concede psychological equality, but not practical equality.