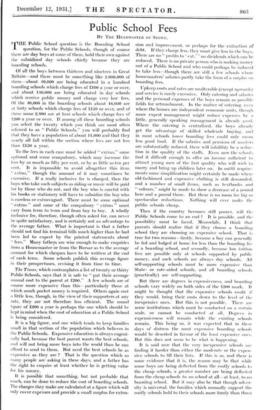 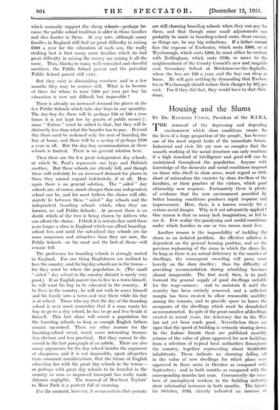 BY THE HEADMASTER OF STO NV THE Public School question is the Boarding School question, for the Public Schools, though of course there are day boys at some of them, hold their own against the subsidized day schools chiefly because they are boarding schools.

To the fees in each case must be added " extras," some optional and some compulsory, which may increase the fees by as much as fifty per cent. or by as little as ten per cent. It is impossible to avoid altogether this item extras," though the amount of it may sometimes be excessive. If a really inclusive fee is charged, then the boys who take such subjects as riding or music will be paid for by those who do not, and the boy who is careful with his books or stationery will have to subsidize the boy who is careless or extravagant. There must be some optional extras " and some of the compulsory " extras " must vary from term to term and from boy to boy. A wholly inclusive fee, therefore, though often asked for, can never be quite satisfactory, and is certainly not an advantage to the average father. What is important is that a father should not find his terminal bills much higher than he had been led to expect by the printed statements about " fees." Many fathers are wise enough to make enquiries from a Housemaster or from the Bursar as to the average amount for which cheques have to be written at the end of each term. Some schools publish this average figure in their prospectuses, revising it from time to time.

The Times, which contemplates a list of twenty or thirty Public Schools, says that it is safe to " put their average annual cost to the parent at £200." A few schools are of course more expensive than this—particularly those at which much pocket money is required. Others again cost a little less, though, in the view of their supporters at any rate, they are not therefore less efficient. The round figure of £200 a year is perhaps the one which should be kept in mind when the cost of education at a Public School is being considered.

It is a big figure, and one which tends to keep families small in that section of the population which believes in the Public Schools. Expensive education is always eugeni- cally bad, because the best parent wants the best schools, and will not bring more boys into the world than he can afford to send to them. But need the best schools be as expensive as they are ? That is the question which so many people are asking in these days, and a father has the right to enquire at least whether he is getting value for his money.

It is possible that something, but not probable that much, can be done to reduce the cost of boarding schools. The charges they make are calculated at a figure which will only cover expenses and provide a small surplus for exten- sion and improvement, or perhaps for the extinction of debt. If they charge less, they must give less to the boys. There are no " profits to ' cut,' " no dividends which can be reduced. There is no private person who is making money out of a Public School and who could perhaps be induced to take less—though there arc still a few schools where housemasters' salaries partly take the form of a surplus on boarding fees.

Upkeep costs and rates arc unalterable (except upwards) and service is rarely excessive. Only catering and salaries and the personal expenses of the boys remain as possible fields for retrenchment. In the matter of catering, even where the houses arc independent economic units, though more expert management might reduce expenses by a little, generally speaking managethent is already goad. Where the catering is centralized, the boys already get the advantage of skilled wholesale buying. and in most schools lower boarding fees could only mean less good food. If the salaries and pensions of masters are substantially reduced, there will infallibly be a reduc- tion in the quality of the staffs. Even now the schools find it difficult enough to offer an income sufficient to attract young men of the first quality who will wish to marry and bring up children later on. In outfit require- ments some simplification might certainly be made where old-fashioned and expensive clothing is still demanded. and a number of small items, such as textbooks and " colours," might be made to show a decrease of a pound here and a pound there. But there is no room for big or spectacular reductions. Nothing will ever make the public schools cheap.

Then if the country becomes still poorer, will the Public Schools come to an end ? It is possible. and the possibility must be faced. Meanwhile, I think that parents should realize that if they choose a boarding school they are choosing an expensive school. That is true for two reasons—firstly, because a boy can generally be fed and lodged at home for less than the boarding fee of a boarding school, and secondly, because low tuition fees arc possible only at schools supported by public money, and such schools are always day schools. All self-supporting schools must be more expensive than State- or rate-aided schools, and all boarding schools (practically) are self-supporting.

But there are degrees in expensiveness, and boarding schools vary widely on both sides of the £200 mark. It might be thought that the expensive schools could. if they would, bring their costs down to the level of the inexpensive ones. But this is not possible. There are some institutions which must be conducted on a certain scale, or cannot be conducted at all. Degrees in expensiveness will remain while the existing schools remain. This being so, it was expected that in these days of distress the most expensive boarding schools would be deserted in favour of the least expensive ones. But this does not seem to be what is happening.

It is said now that the very inexpensive schools are finding it harder than either the moderate or the expen- sive schools to fill their lists. If this is so, and there is some evidence that it is, the reason may be that while some boys are being deflected from the costly schools to the cheap schools, a greater number are being deflected from the cheap schools to no school at all—at least, to no boarding school. But it may also be that though adver- sity is universal, the families which normally support the costly schools hold to their schools more firmly than those which normally support the cheap schools—perhaps be- cause the public school tradition is older in those families and dies harder in them. At any rate, although many families in England still find no great difficulty in raising £200 a year for the education of each son, the really striking fact is that many more families which do find great difficulty in raising the money arc raising it all the same. Thus, thanks to many well-concealed and cheerful sacrifices, the Public School parent and the potential Public School parent still exist.

But they exist in diminishing numbers, and in a few months they may be scarcer still. What is to become of those for whom to raise £200 per year per boy for education is now not difficult but impossible ?

There is already an increased demand for places at the few Public Schools which take day boys in any quantity. The day-boy fee there will be perhaps £50 or £60 a year (since it is not kept low by grants of public money ) ; some " Extras " must be added to that, but they will be distinctly less than what the boarder has to pay. - Beyond this there need be reckoned only -the cost of boarding the boy at home, and there will be a saving of perhaps £100 a year in all. But the day-boy accommodation at these schools is limited. There is no general solution here.

Then there are the few great independent day schools, of which St. Paul's represents one type and Dulwich another. But these schools are already full, and though there will certainly be an increased demand for places in them they cannot expand indefinitely, if at all. Here again there is no general solution. The " aided " day schools are, of course, much cheaper than any independent school can be, and for most fathers the choice will ulti- mately lie between these " aided " day schools and the independent boarding schools which, when they arc famous, we call Public Schools. At present there is no doubt which of the two is being chosen by fathers who can afford the choice. I think it is certain that until there is no longer a class in England which can afford boarding- school fees and until the subsidized day schools are far more numerous and attractive than they are now, the Public Schools—or the most and the best of them—will remain full.

The preference for boarding schools is strongly rooted in England. For one thing Englishmen are inclined to love the country, and the big day schools are in the towns— for they must be where the population is. (The small " aided " day school in the country district is rarely very good.) • If an English parent has to live in a town himself, he will want his boy to be educated in the country. If he lives in the country, he will not wish to move himself and his family into a town and stay there while his boy is at school. Those who say that the day of the boarding school is over must remember that if a man wants his boy to go to a day school, he has to go and live beside it himself. This fact alone will assure a population for the boarding schools so long as enough English fathers remain un-ruined. There arc other reasons for the boarding-school creed, much more interesting because less obvious and less practical. But they cannot be dis- cussed in the last paragraph of an article. There are also many arguments for the day school besides the argument of cheapness, and it is not impossible, apart altogether from economic considerations, that the future of English education lies with the great day schools in the towns— or perhaps with great day schools to be founded in the country as soon as improved transport has really made distance negligible. The removal of Merchant Taylors' to Moor Park is a portent full of meaning.

For the moment, however, it seems certain that parents are still choosing boarding schools when they can pay for them, and that though some small adjustments can probably be made in boarding-school costs, there cannot, as things are, be any big reductions. If a-father cannot face the expense of Exchester, which costs £300, or of Wyeborough, which costs £200, he must either be content with Zedlingham, which costs £130, or new to .the neighbourhood of the County Council's new and magnifi- cent Secondary School at Brickston-on-the-Asphalte, where the fees are £20 a year, and the boy can sleep at home. lie will gain nothing by demanding that Exches- ter or Wyeborough should reduce their charges by 331 per cent. For if they did that, they would have to shut their doors.