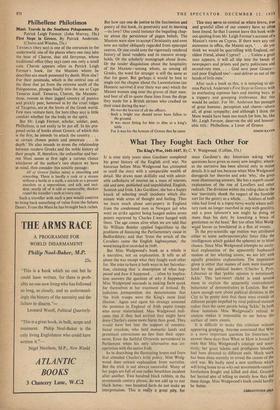 What They Fought Each Other For

IT is over sixty years since Gardiner completed his great history of the English civil war. No historian before Miss Wedgwood has attempted to retell the story with a comparable wealth of detail. She draws most skilfully and with admir- able catholicity of interest on a mass of sources, old and new, published and unpublished, English, Scottish and Irish. Like Gardiner, she has a happy knack of selecting small incidents which illu- minate wide areas of thought and feeling. Thus we learn much about anti-popery in England from the condemned men in Newgate jail who went on strike against being hanged unless seven priests reprieved by Charles I were hanged with them. The age comes alive when we are told that Sir William Boteler applied logarithms to the problems of financing the Parliamentary cause in Bedfordshire; and that 'from the wreck of the Cavaliers came the English highwayman,' the word being first recorded in 1649.

But Miss Wedgwood's book as a whole is a narrative, not an explanation. It tells us all about the war except what they fought each other for. She tries to have it both ways in her Introduc- tion, claiming that 'a description of what hap- pened and how. it happened. . . often by implica- tion answers the question of why it happened.' Miss Wedgwood succeeds in making facts speak for themselves in her treatment of Ireland. By judicious juxtaposition she demonstrates that 'the Irish troops were the King's most fatal illusion.' Again and again his strategy assumed the presence in England of high papist troops who never materialised. Miss Wedgwood indi- cates that if they had arrived they might have done Charles's cause more harm than good. They• would have lost him the support of constitu- tional royalists, who held monastic lands and protestant convictions no less than their oppo- nents. Even the faithful Ormonde surrendered to Parliament when his only alternative was co- operation with the native Irish.

So in describing the fluctuating hopes and fears that attended Charles's Irish policy, Miss Wedg- wood does extract explanation from narrative. But the trick is not always successful. Many of her pages are full of one rather breathless incident after another. Two hundred black rabbits, in the seventeenth century phrase, do not add up to one black horse: two hundred facts do not make an interpretation. This is really a great pity, for since Gardiner's day historians asking 'why' questions have given us many new insights; where- as the narrative has been altered only in minor details. It is sad too, because when Miss Wedgwood disregards her theories and asks 'why,' she gives most illuminating answers. She has a superb causal explanation of the rise of Levellers and other radicals. The divisions within the ruling class in the war 'inevitably shook the respect of the humbler sort for. the gentry as a whole.... Soldiers of both sides had lived in a topsy-turvy world where mili- tary rank no longer marched in step with gentility, and a poor labourer's son might be doing no more than his duty by knocking a brace of gentlemen on the head.' But too often Miss Wedg- wood leaves us bewildered in a flux of events.

In the pre-scientific age motion was attributed either to some anthropomorphic force (like the intelligences which guided the spheres) or to blind chance. Since Miss Wedgwood attempts no analy- tical explanation of the apparently haphazard motion of her whirling atoms, we are left with equally primitive explanations. The impression given is either that masses of men were manipu- lated by the political leaders (Charles I, Pym, Lilburne) or that 'public opinion is notoriouslY fickle.' This last-resort cliché is used several times to explain the apparently contradictory behaviour of demonstrators in London. But we know enough now about political divisions in the City to be pretty sure that these were crowds of different people impelled by rival political motives rather than the same people being 'fickle.' In both these instances Miss Wedgwood's refusal to analyse makes it impossible to see below the surface of mere events.

It is difficult to make this criticism without appearing grudging. Anyone convinced that WhY is a more important question for historians to answer these days than What or How is bound to wish that Miss Wedgwood's courage and sensi- tivity, her great talents and prodigious labours, had been directed to different ends. Much work has been done recently to reveal the causes of the civil war. We badly need a new synthesis which will bring home to us why our seventeenth-century forefathers fought and killed and died. Granted her limited aim of telling us merely how they did these things, Miss Wedgwood's book could hardlY be better.