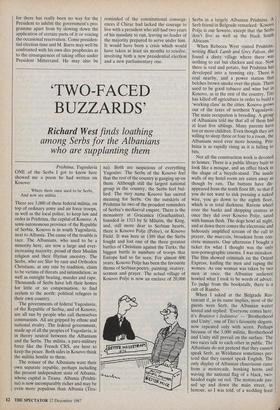 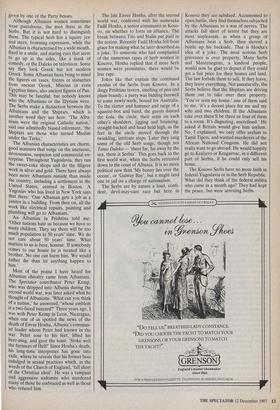 among Serbs for the Albanians who are supplanting them

Prishtina, Yugoslavia ONE of the Serbs I got to know here showed me a poem he had written on Kosovo: . . Where there once used to be Serbs, And now are militia . . . .

There are 3,000 of these federal militia, on top of ordinary army and air force troops, as well as the local police, to keep law and order in Prishtina, the capital of Kosovo. A semi-autonomous province of the Republic of Serbia, Kosovo is in south Yugoslavia, next to Albania. The cause of the trouble is race. The Albanians, who used to be a minority here, are now a large and ever- increasing majority, proud of their Muslim religion and their Illyrian ancestry. The Serbs, who are Slav by race and Orthodox Christians, at any rate by tradition, claim to be victims of threats and intimidation, as well as outright beating, murder and rape. Thousands of Serbs have left their homes for little or no compensation, to find asylum to the north: political refugees in their own country.

The governments of federal Yugoslavia, of the Republic of Serbia, and of Kosovo, are all run by people who call themselves communists. All are gripped by ethnic and national rivalry. The federal government, made up of all the peoples of Yugoslavia, is in theory neutral, between the Albanians and the Serbs. The militia, a para-military force like the French CRS, are here to keep the peace. Both sides in Kosovo think the militia hostile to them.

The noisier of the Albanians want their own separate republic, perhaps including the present independent state of Albania, whose capital is Tirana. Albania (Prishti- na) is now incomparably richer and may be even more populous than Albania (Tira- na). Both are suspicious of everything Yugoslay. The Serbs of the Kosovo feel that the rest of the country is ganging up on them. Although still the largest national group in the country, the Serbs feel bul- lied. The very. name Kosovo has sacred meaning for Serbs. On the outskirts of Prishtina lie two of the proudest reminders of Serbia's mediaeval empire. There is the monastery at Gracanica (Grachanitsa), founded in 1313 by St Milutin, the King, and, still more dear to Serbian hearts, there is Kosovo Polje (Polye), or Kosovo Field. It was here in 1389 that the Serbs fought and lost one of the three greatest battles of Christians against the Turks, the biggest battle in numbers of troops that Europe had so far seen. For almost 600 years, Kosovo Polje has been the favourite theme of Serbian poetry, painting, oratory, sermon and prayer. The actual village of Kosovo Polje is now an enclave of 20,000 Serbs in a largely Albanian Prishtina. A Serb friend in Belgrade remarked: 'Kosovo Polje is our Soweto, except that the Serbs don't live as well as the black South Africans.'

When Rebecca West visited Prishtina, writing Black Lamb and Grey Falcon, she found a dusty village where there was nothing to eat but chicken and rice. Now there is veal and potato, but Prishtina has developed into a teeming city. There is coal nearby, and a power station that belches brown smoke over the plain. There used to be good tobacco and wine but in Kosovo, as in the rest of the country, Tito has killed off agriculture in order to build a `working class' in the cities. Kosovo grows out of the taxes of northern Yugoslavia. The main occupation is breeding. A group of Albanians told me that all of them had at least five siblings. Many parents have ten or more children. Even though they are willing to sleep three or four to a room, the Albanians need ever more housing. Pris- htina is as rapidly rising as it is falling to bits.

Not all the construction work is devoted to homes. There is a public library built to look like a mosque, and an office block in the shape of a bicycle-stand. The inside walls of my hotel room are eaten away as though by rats. The buttons have dis- appeared from the tenth floor lift, so that if you do not want to risk pressing a naked wire, -you go down to the eighth floor, which is in total darkness. Ravens wheel over the banks and shopping centres as once they did over Kosovo Polje, sated with human flesh. The dogs howl all night, and at dawn there comes the electronic and hideously amplified scream of the call to prayer, the muezzin, broadcast from con- crete minarets. One afternoon I bought a ticket for what I thought was the only non-pornographic cinema. I was mistaken. The film showed criminals on the Orient Express, knifing the men and raping the women. As one woman was taken by two men at once, the Albanian audience howled what I took to be words of advice. To judge from the bookstalls, there is a cult of Rambo.

When I asked at the Belgrade Res- taurant if, as its name implies, most of the guests were Serb, the Albanian waiter leered and replied: 'Everyone comes here, it's Bratstvo i Jedinstvo' — 'Brotherhood and Unity', one of Tito's favourite slogans, now repeated only with scorn. Perhaps because of the 3,000 militia, Brotherhood and Unity still prevail on the surface. The two races talk to each other in public. The Albanians do not pretend that they cannot speak Serb, as Welshmen sometimes pre- tend that they cannot speak English. The only display of Albanian chauvinism came from a motorcade, honking horns and waving the national flag of a black, two- headed eagle on red. The motorcade pas- sed up and down the main street, in honour, so I was told, of a wedding feast given by one of the Party bosses.

Although Albanian women sometimes wear pantaloons, the men dress as the Serbs. But it is not hard to distinguish them. The typical Serb has a square jaw and stern, frowning expression, while the Albanian is characterised by a wide mouth, fixed in a smile, and staring eyes that seem to go up at the sides, like a mask of comedy, or the Daleks on television. Some say they look Greek but not modern Greek. Some Albanian faces bring to mind the figures on vases, friezes or statuettes from ancient Greek, Minoan or even Egyptian times; also ancient figures of Pan. This may be fanciful; but nobody knows who the Albanians or the Illyrians were. The Serbs make a distinction between the Albanians and the Shiptars, which is another word they use here. 'The Alba- nians were the original Catholic nation,' said one admittedly biased informant, 'the Shiptars are those who turned Muslim under the Turks.'

The Albanian characteristics are charm, good manners that verge on the unctuous, deviousness, suspicion and commercial en- terprise. Throughout Yugoslavia, they run the sweet-cake shops and do the filigree work in silver and gold. There have always been more Albanians outside than inside the country, including a settlement in the United States, centred in Boston. A Yugoslav who has lived in New York says that there: 'One Albanian gets a job as a janitor in a building. From then on, all the work like electrical repairs, painting and plumbing will go to Albanians.' An Albanian in Prishtina told me: `Other nations hate us because we have so many children. They say there will be too much population in 50 years' time. We do not care about 50 years' time. What matters to us is besa, honour. If somebody comes to our house he is treated like a brother. No one can harm him. We would rather die than let anything happen to him.'

Most of the praise I have heard for Albanian chivalry came from Albanians. The Spectator contributor Peter Kemp, who was dropped into Albania during the second world war, was later asked what he thought of Albanians. 'What can you think of a nation,' he answered, 'whose emblem is a two-faced buzzard?' Three years ago, I was with Peter Kemp in Leon, Nicaragua, when one of us spotted the news of the death of Enver Hoxha, Albania's commun- ist leader whom Peter had known in the war. Peter rose to his feet, lifted his beer-mug, and gave the toast: 'Stoke well the furnaces of Hell!' Since Hoxha's death, his long-time interpreter has gone into exile, where he reveals that his former boss indulged in sexual practices which, in the words of the Church of England, 'fall short of the Christian ideal'. He was a rampant and aggressive sodomite who murdered many of those he embraced as well as those who refused him. The late Enver Hoxha, after the second world war, conferred with his namesake Fadil Hoxha, a senior communist in Koso- vo, on whether to form an alliance. The break between Tito and Stalin put paid to the notion. Recently Fadil Hoxha fell from grace for making what he later described as a joke. To someone who had complained of the numerous rapes of Serb women in Kosovo, Hoxha replied that if more Serb women were prostitutes, there would be less rape.

Jokes like that explain the continued exodus of the Serbs from Kosovo. In a dingy Prishtina tavern, smelling of piss and plum-brandy, a party was bidding farewell to some newly-weds, bound for Australia. To the clatter and hammer and surge of a squeeze-box and band, the guests danced the kola, the circle, their arms on each other's shoulders, jigging and bouncing, straight-backed and head held high, as the feet in the circle moved through the twinkling, intricate steps. Later they sang some of the old Serb songs, though not Tamo Daleko — 'there far, far away by the sea, there is Serbia'. This goes back to the first world war, when the Serbs retreated down to the coast of Albania. It is no more political now than 'My bonny lies over the ocean', or 'Galway Bay', but it might land one in jail on a charge of nationalism. The Serbs are by nature a loud, confi- dent, devil-may-care race but here in Kosovo they are subdued. Accustomed to open battle, they find themselves subjected by the Albanians to a war of nerves. The attacks fall short of terror but they are most unpleasant, as when a group of Albanians beat a Serb, then shoved a bottle up his backside. That is Hoxha's idea of a joke. The most serious Serb grievance is over property. Many Serbs and Montenegrins, a kindred people, would now be glad to depart if they could get a fair price for their homes and land. The law forbids them to sell. If they leave, they leave everything. Not unnaturally, the Serbs believe that the Shiptars are driving them out to take over their property. `You've seen my home,' one of them said to me, 'it's a decent place for me and my wife and two children. If the Albanians take over there'll be three or four of them to a room. It's disgusting, uncivilised.' He asked if Britain would give him asylum. No, I explained, we only offer asylum to Tamil Tigers, and wanted murderers of the African National Congress. He did not really want to go abroad. He would happily go to Kraljevo or Kraguevac, in a different part of Serbia, if he could only sell his home.

The Kosovo Serbs have no more faith in federal Yugoslavia or in the Serb Republic. What did they think of the federal militia who came in a month ago? They had kept the peace, but were arresting Serbs.