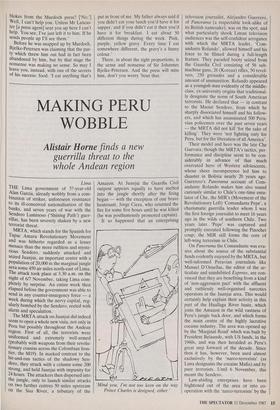 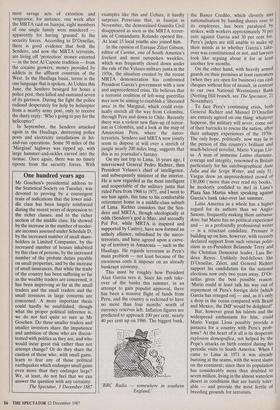 Lima THE Lima government of 37-year-old Alan Garcia, already wobbly from a com- bination of strikes, unforeseen resistance to its ill-conceived nationalisation of the banks, and seven years of war with the Sendero Luminoso (`Shining Path') guer- rillas, has been severely shaken by a new terrorist threat.

MRTA, which stands for the Spanish for Tupac Amaru Revolutionary Movement and was hitherto regarded as a lesser menace than the more ruthless and myste- rious Sendero, suddenly attacked and seized Juanjui, an important centre with a population of 20,000 in the marginal jungle area some 450 air miles north-east of Lima. The attack took place at 3.30 a.m. on the night of 6/7 November, taking Lima com- pletely by surprise. An entire week then elapsed before the government was able to send in any counter-insurgency force — a week during which the nervy capital, reg- ularly bombed by the Sendero, reeled with alarm and speculation. The MRTA attack on Juanjui did indeed seem to open a whole new vista, not only in Peru but possibly throughout the Andean region. First of all, the terrorists were uniformed and extremely well-armed (probably with weapons from their revolu- tionary cousins across the Colombian fron- tier, the M19). In marked contrast to the hit-and-run tactics of the shadowy Sen- dero, they struck with a column some 200 strong, and held Juanjui with impunity for 24 hours. The attackers then dispersed into the jungle, only to launch similar attacks on two further centres 50 miles upstream on the Sisa River, a tributary of the Amazon. At Juanjui the Guardia Civil outpost appears equally to have melted into the jungle shortly after the firing began — with the exception of one brave lieutenant, Jorge Cieza, who returned the fire for some five hours until he was killed (he was posthumously promoted captain). It so happened that an enterprising `Mind you, I'm not too keen on the way Prince Charles is designed, either.' television journalist, Alejandro Guerrero, of Panorama (a respectable look-alike of its British namesake), was on the spot, and what particularly shook Liman television audiences was the self-confident arrogance with which the MRTA leader, 'Corn- andante Rolando', allowed himself and his force to be filmed during a full-length feature. They paraded booty seized from the Guardia Civil consisting of 56 sub- machine guns, 26 (Korean) rifles, 50 revol- vers, 250 grenades and a considerable amount of ammunition. Rolando appeared as a youngish man evidently of the middle- class, ex-university origins that traditional- ly designate the norm of South American terrorists. He declared that — in contrast to the Maoist Sendero, from which he sharply dissociated himself and his follow- ers, and which has assassinated 500 Peru- vian policemen over the past seven years — the MRTA did not kill 'for the sake of killing'. They were 'not fighting only for Peru, but for the liberation of all America'.

Their model and hero was the late Che Guevara; though the MRTA's tactics, per- formance and discipline seem to be con- siderably in advance of that much overrated hero of Western adolescents, whose sheer incompetence led him to disaster in Bolivia nearly 20 years ago. Guerrero's Panorama account of Com- andante Rolando makes him also sound curiously similar to Chile's one-time emu- lator of Che, the MIR's (Movement of the Revolutionary Left) 'Comandante Pepe', a charismatic guerrilla leader whom I was the first foreign journalist to meet 16 years ago in the wilds of southern Chile. Two years later 'Pepe' was captured and promptly executed following the Pinochet coup; the MIR still forms the core of left-wing terrorism in Chile.

On Panorama the Comandante was eva- sive about the source of the substantial funds evidently enjoyed by the MRTA, but well-informed Peruvian journalists like Manuel D'Ornellas, the editor of the ar- ticulate and uninhibited Expreso, are con- vinced that they are benefiting from a kind of 'non-aggression pact' with the affluent and ruthlessly well-organised narcotics operators in the Juanjui area. This would certainly help explain their activity in this part of the Huallaga River basin, which joins the Amazon in the wild vastness of Peru's jungle back door, and which forms the main centre of the highly lucrative cocaine industry. The area was opened up by the 'Marginal Road' which was built by President Belaunde, with US funds, in the 1960s, and was then heralded as Peru's great step forward of the decade. Since then it has, however, been used almost exclusively by the `narco-terrorists' (as Lima designates the cocaine Mafia) and by pure terrorists. Until 6 November, this meant the Sendero.

Law-abiding enterprises have been frightened out of the area or into co- operation with the `narco-terrorists' by the most savage acts of extortion and vengeance; for instance, one week after the MRTA raid on Juanjui, eight members of one single family were murdered apparently for having 'grassed' to the security forces. According to D'Ornellas, there is good evidence that both the Sendero, and now the MRTA terrorists, are living off `protection' money extorted — in the best Al Capone tradition — from the cocaine growers; money provided by addicts in the affluent countries of the West. In the Huallaga basin, terror is the one language that is spoken. At Uchiza this June, the Sendero besieged for hours a police post, then killed and castrated seven of its garrison. During the fight the police radioed desperately for help by helicopter from a nearby army post, only to receive the dusty reply: `Who's going to pay for the helicopter?'

In September, the Sendero attacked again in the Huallaga, destroying police posts and electricity installations in hit- and-run operations. Some 50 miles of the `Marginal' highway was ripped up, with large hammer-and-sickles carved into the tarmac. Once again, there was no timely riposte from the security forces. With examples like this and Uchiza, it hardly surprises Peruvians that, at Juanjui in November, the demoralised Guardia Civil disappeared as soon as the MRTA terror- ists of Comandante Rolando opened fire. At least 15 local youths also joined him.

In the opinion of Enrique Zileri Gibson, editor of Caretas, one of South America's liveliest and most outspoken weeklies, which was frequently closed down under the rule of the Velasco military junta in the 1970s, the situation created by the recent MRTA demonstration has confronted President Garcia's government with a new and unprecedented crisis. He believes that a terrorist coalition of left-wing guerrillas may now be aiming to establish a `liberated area' in the Marginal, which could even- tually stretch all the way from Colombia, through Peru and down to Chile. Recently there was a violent new flare-up of terror- ism in Colombia, and a look at the map of Amazonian Peru, where the narco- terrorists, Sendero and MRTA now jointly seem to dispose at will over a stretch of jungle nearly 200 miles long, suggests that this is no journalist's fantasy.

On my last trip to Lima, 16 years ago, I interviewed General Pedro Richter, then President Velasco's chief of intelligence, and subsequently minister of the interior. He is now regarded as the Most intelligent and respectable of the military junta that ruled Peru from 1968 to 1975, and I went to see him again, this time to his comfortable retirement home in a middle-class suburb of Lima. Richter considers that the Sen- dero and MRTA, though ideologically at odds (Sendero's god is Mao, and secondly Pol Pot, while MRTA is inspired and supported by Castro), have now formed an unholy alliance, subsidised by the narco- terrorists, and have agreed upon a carve- up of territory in Amazonia — such as the Huallaga. He regards terrorism as Peru's main problem — not least because of the enormous costs it imposes on an already bankrupt economy.

This must be roughly how President Alan Garcia sees it. Since his rash take- over of the banks this summer, in an attempt to gain populist approval, there has been a massive flight of funds from Peru, and the country is reckoned to have no more than four months' worth of currency reserves left. Inflation figures are predicted to approach 100 per cent, nearly 40 per cent up on 1986. The biggest bank, `BBC Radio — somewhere in southern England.' the Banco Credito, which cleverly met nationalisation by handing shares over to its employees, has been paralysed by strikes, with workers approximately 70 per cent against Garcia and 30 per cent for. Peru's judges are still unable to make 1.11) their minds as to whether Garcia's take- over was constitutional or not, and lawyers look like arguing about it for at least another few months.

On the other hand, with heavily armed guards on their premises at least customers (when they are open for business) can cash cheques without fear of assault, in contrast to our own National Westminster Bank (Notting Hill branch, see The Spectator, 21 November).

To face Peru's continuing crisis, both General Richter and Manuel D'Ornellas are entirely agreed on one thing: whatever happens, the military will never, come out of their barracks to rescue the nation, after their unhappy experiences of the 1970s.

The only hope, politically, now may lie in the person of this country's brilliant and much-beloved novelist, Mario Vargas Llo- sa. A man of immense Latino charisma, courage and integrity, renowned in Britain particularly for his autobiographical Aunt Julia and the Script Writer, and only 51, Vargas drew an unprecedented crowd of 130,000 (`more than ever read my books,' he modestly confided to me) in Lima's Plaza San Martin when speaking against Garcia's bank take-over last summer.

Latin America as a whole has a higher regard for its authors than we Anglo- Saxons, frequently making them ambassa- dors; but Mario has no political experience and — as a profoundly professional writer — is a reluctant candidate. Pressure is building up on him, however, with recently declared support from such veteran politi- cians as ex-President Belaunde Terry and the Christian Democrat leader, Luis Be- doya Reyes. Unlikely bed-fellows like D'Ornellas, Zileri, and General Richter support his candidature for the national elections now only two years away. D'Or- nellas gives the best possible reason: `Mario could at least talk his way out of repayment of Peru's foreign debt [which Garcia has reneged on] — and, as it's only a drop in the ocean compared with Brazil and Mexico, the IMF would be delighted!' But, however great his talents and the widespread enthusiasm for him, could Mario Vargas Llosa possibly provide a panacea for a country with Peru's prob- lems? At the heart of it all is its desperate explosion demografica, not helped by the Pope's attacks on birth control during his periodic visits to South America. When came to Lima in 1971 it was already bursting at the seams, with the worst slums on the continent; since then its population has considerably more than doubled to seven million, living in the almost waterless desert in conditions that are barely toler- able — and provide the most fertile of breeding grounds for terrorists.