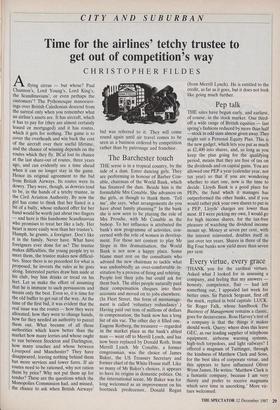 THE sales have begun early, and earliest, of course, in the stock market. One third- off a wide range of British equities — last spring's fashions reduced by more than half —stock in odd sizes almost given away.They might suit a Personal Equity Plan. This is the new gadget, which lets you put as much as £2,400 into shares, and, so long as you keep the plan going for the qualifying period, means that they are free of tax on the dividends and on capital gains. You are allowed one PEP a year (calendar year, not tax year) so that if you are wondering whether to start one, now is the time to decide. Lloyds Bank is a good place for PEPs, the fund which it manages has outperformed the other banks, and if you would rather pick your own shares to put in a PEP, Lloyds' charges are lower than most. If I were picking my own, I would go for high income shares, for the tax-free pleasure of watching the dividend income mount up. Money at seven per cent, with the interest reinvested, doubles itself in just over ten years. Shares in three of the Big Four banks now yield more than seven per cent.