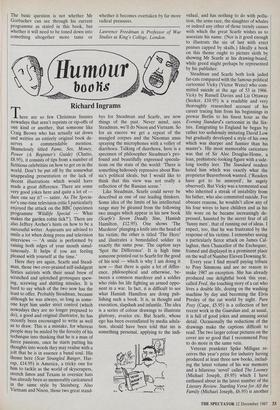 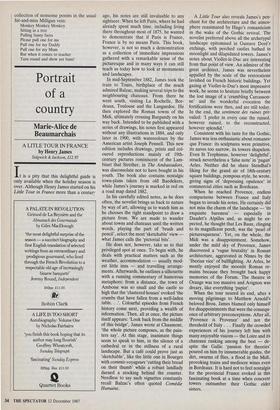 There are so few Christmas funnies nowadays that aren't reprints or rip-offs of one kind or another, that someone like Craig Brown who has actually sat down and written an entirely original book de- serves a commendable mention. Shamelessly titled Fame, Sex, Money, Power (A Beginner's Guide) (Chatto, £8.95), it consists of tips from a number of fictitious celebrities on how to get on in the world. Don't be put off by the somewhat unappealing presentation or the lack of decent illustrations which would have made a great difference. There are some very good jokes here and quite a lot of dare one say it? — satire. As The Specta- tor's one-time television critic I particularly enjoyed the attack on the BBC (specimen programme 'Wildlife Special — What makes the garden robin tick?'). There are also Jeffrey Archer's hints on how to be a successful writer. Aspirants are advised to smile a lot when doing press and television interviews — 'A smile is performed by raising both edges of your mouth simul- taneously. It helps if you are feeling pleased with yourself at the time.'

Here they are again, Scarfe and Stead- man, those two over-praised self-indulgent Sixties satirists with their usual brew of scratched and splotched grotesques spew- ing, screwing and shitting missiles. It is hard to say which of the two now has the least to offer. Probably Steadman, because although he was always, so long as some- one kept him under strict control (which nowadays they are no longer prepared to do), a good and original illustrator, he has recently been encouraged to write as well as to draw. This is a mistake, for whereas people may be misled by the ferocity of his technique into thinking that he is a man of fierce passions, once he starts putting his thoughts into words they may realise with a jolt that he is in essence a banal soul. His theme here (Scar Strangled Banger, Har- rap, £14.95) is America, a tricky one for him to tackle as the world of skyscrapers, stretch limos and Texans in oversize hats has already been so memorably caricatured in the same style by Steinberg. Also Vietnam and Nixon, those two great stand- bys for Steadman and Scarfe, are now things of the past. Never mind, says Steadman, we'll do Nixon and Vietnam. So for an encore we get a repeat of the mangled corpses and the Nixonian anus spraying the microphones with a volley of diarrhoea. Talking of diarrhoea, here is a specimen of philosopher Steadman's pro- found and beautifully expressed specula- tions on the state of the world: 'There is something hideously repressive about Rus- sia's political ideals, but I would like to think that this view was not really a reflection of the Russian scene.'

Like Steadman, Scarfe could never be described as one of our leading thinkers. Some idea of the limits of his intellectual range may be gleaned from the following two images which appear in his new book (Scarfe's Seven Deadly Sins, Hamish Hamilton, £12.95). One shows 'The Murderer' plunging a knife into the head of his victim; the other is titled 'The Hero' and illustrates a bemedalled soldier in exactly the same pose. The caption says `Spot the Difference'. It is high time someone pointed out to Scarfe for the good of his soul — which is why I am doing it now — that there is quite a lot of differ- ence, philosophical and otherwise, be- tween a common murderer and a soldier who risks his life fighting an armed oppo- nent in a war. In fact, it is difficult to see what Hamish Hamilton are doing pub- lishing such a book. It is, in thought and execution, slapdash and infantile. The idea is a series of colour drawings to illustrate gluttony, avarice etc. But Scarfe, whose ego has been overinflated by media adula- tion, should have been told that sin is something personal, applying to the indi- vidual, and has nothing to do with pollu- tion, the arms race, the slaughter of whales or indeed any other of those trendy causes with which the great Scarfe wishes us to associate his name. (Nor is it good enough to illustrate the sin of lust with erect penises capped by skulls.) Ideally a book on this theme ought to picture sloth by showing Mr Scarfe at his drawing-board, while greed might perhaps be represented by his publisher.

Steadman and Scarfe both look jaded fat-cats compared with the famous political cartoonist Vicky (Victor Weisz) who com- mitted suicide at the age of 53 in 1966. Vicky by Russell Davies and Liz Ottaway (Secker, £10.95) is a readable and very thoroughly researched account of his career tracing him from his beginnings in prewar Berlin to his finest hour as the Evening Standard's cartoonist in the Six- ties. Emigrating to England he began by rather too sedulously imitating David Low but gradually developed a style of his own which was sharper and funnier than his master's. His most memorable caricature was that of Sir Alec Douglas-Home, a lean, prehistoric-looking figure with a side- long toothy leer. The Standard readers hated him which was exactly what the proprietor Beaverbrook wanted. (`Readers have got to be annoyed', he sagely observed). But Vicky was a tormented soul who inherited a streak of instability from his father, who also committed suicide. For obscure reasons, he wouldn't allow any of his four wives to have children and as his life wore on he became increasingly de- pressed, haunted by the secret fear of all `funny men', that of running out of ideas. I expect, too, that he was frustrated by the response of his victims. I remember seeing a particularly fierce attack on James Cal- laghan, then Chancellor of the Exchequer, framed and displayed in a prominent place on the wall of Number Eleven Downing St.

Every year I find myself paying tribute to Posy Simmons and see no reason to make 1987 an exception. She has already produced one delightful book this year, called Fred, the touching story of a cat who lives a double life, dozing on the washing machine by day and becoming the Elvis Presley of the cat world by night. Pure Posy (Cape, £5.95) is a collection of her recent work in the Guardian and, as usual, it is full of good jokes and amusing social detail. Occasionally the reductions of the drawings make the captions difficult to read. The two larger colour pictures on the cover are so good that I recommend Posy to do more in the same vein.

Veteran prankster Spike Milligan re- ceives this year's prize for industry having produced at least three new books, includ- ing the latest volume of his war memoirs and a hilarious 'novel' called The Looney (Michael Joseph, £9.95) which I have enthused about in the latest number of the Literary Review. Startling Verse for All the Family (Michael Joseph, £6.95) is another