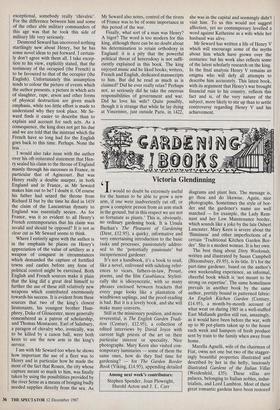 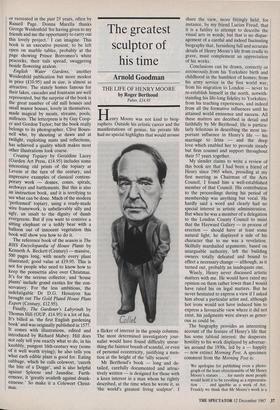 It would no doubt be extremely useful for the human to be able to grow a new arm, if one were inadvertently cut off, or grow a complete person from an arm stuck in the ground, but in this respect we are not so fortunate as plants.' This is, obviously, no ordinary gardening book. It is Ursula Buchan's The Pleasures of Gardening (Dent, £12.95), a quirky, informative and very entertaining introduction to the basic tasks and processes, passionately addres- sed to the 'potentially passionate' but inexperienced gardener.

It's not a handbook, it's a book to read, like a novel, enlivened with sidelong refer- ences to vicars, fathers-in-law, Proust, poems, and the film Casablanca. Stylisti- cally she is idiosyncratic, with so many phrases enclosed between brackets that every page looks like a plantation of windblown saplings, and the proof-reading is bad. But it is a lovely book, and she will make many converts.

Still in the missionary position, and more reverential, is The English Garden Tradi- tion (Century, £12.95), a collection of edited interviews by David Joyce with current high priests of the art on their particular interest or speciality. Nice photographs. Mary Keen also visited con- temporary luminaries — some of them the same ones, how do they find time for gardening? — for The Garden Border Book (Viking, £14.95), appending detailed diagrams and plant lists. The message is, go thou and do likewise. Again, nice photographs. Sometimes the style of bor- der and the gardener's name are well matched — for example, the Lady Rem- nant and her Low Maintenance border, which sounds like a joke by the late Osbert Lancaster. Mary Keen is severe about the `flimsiness' and other imperfections of a certain 'Traditional Kitchen Garden Bor- der'. She is a modest woman. It is her own.

The best thing about Dirty Weekends, written and illustrated by Susan Campbell (Bloomsbury, £9.95), is its title. It's for the part-time gardener, based on the author's own weekending experience, an informal, cheerful book which is 'not meant to be strong on expertise'. The same homeliness prevails in another book by the same author, prettily bound in patterned fabric: An English Kitchen Garden (Century, £14.95), a month-by-month account of what went on during 1985 in a well-staffed East Midlands garden still run, amazingly, as it would have been before the war, with up to 90 pot-plants taken up to the house each week and hampers of fresh produce sent by train to the family when away from home.

Marella Agnelli, wife of the chairman of Fiat, owns not one but two of the stagger- ingly beautiful properties illustrated and described by her in the hefty, lusciously illustrated Gardens of the Italian Villas (Weidenfeld, £35). These villas are palaces, belonging to Italian nobles, indus- trialists, and Lord Lambton. Most of these great romantic gardens have been restored or recreated in the past 25 years, often by Russell Page. Donna. Marella thanks George Weidenfeld 'for having given to my friends and me the opportunity to carry out this lovely project.' I can imagine. This book is an executive present, to be left open on marble tables, probably at the page showing Prince Borromeo's white peacocks, their tails spread, swaggering beside flowering azaleas.

English Water Gardens, another Weidenfeld publication but more modest in price (£10.95) and in size, is almost as attractive. The stately homes famous for their lakes, cascades and fountains are well represented, but the surprise of the book is the great number of old mill houses and small manor houses, lovely in themselves, made magical by moats, streams, pools, millraces. The letterpress is by Guy Coop- er and Gordon Taylor; but the book really belongs to its photographer, Clive Bours- nell who, by shooting at dawn and at twilight, exploiting mists and reflections, has achieved a quality which makes most other illustrations look coarse.

Creating Topiary by Geraldine Lacey (Garden Art Press, £14.95) includes some interesting old prints of the topiary at Levens at the turn of the century, and impressive examples of classical contem- porary work — domes, cones, spirals, archways and battlements. But this is also an instruction book, and it is terrifying to see what can be done. Mulch of the modern 'performed' topiary, using a ready-made wire framework, is unbelievably silly and ugly, an insult to the dignity of dumb evergreens. But if you want to contrive a sitting elephant or a teddy bear with a balloon out of innocent vegetation this book will show you how to do it.

The reference book of the season is The RHS Encyclopaedia of House Plants by Kenneth A. Beckett (Century) — massive, 500 pages long, with nearly every plant illustrated; good value at £19.95. This is not for people who need to know how to keep the poinsettia alive over Christmas. It's for the serious collector, and 'house plants' include grand exotics for the con- servatory. For the less ambitious, the indefatigable Dr D.G. Hessayon has brought out The Gold Plated House Plant Expert (Century, £12.95).

Finally, The Gardener's Labyrinth by Thomas Hill (OUP, £14.95) is a lot of fun. It's billed as 'the first English gardening book' and was originally published in 1577. It comes with illustrations, edited and Introduced by Richard Mabey. Hill does not only tell you exactly what to do, in his knobbly, pungent 16th-century way (some of it well worth trying); he also tells you what each edible plant is good for. Eating cabbage, which he calls colewort, `cureth the bite of a Dogge', and is also helpful against Spleene and Jaundise. Furth- ermore, it 'greatly availeth against drunk- ennesse.' So make it a Colewort Christ- mas.