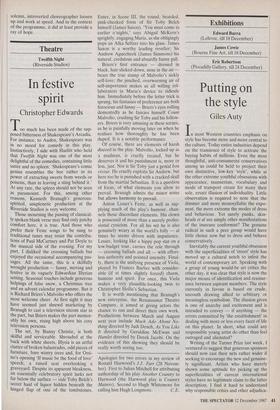 Too much has been made of the sup- posed bitterness of Shakespeare's Arcadia. For instance, to Auden, Shakespeare was in no mood for comedy in this play. Instinctively, I side with Hazlitt who held that Twelfth Night was one of the most delightful of the comedies, containing little satire and no spleen: 'Shakespeare's comic genius resembles the bee rather in its power of extracting sweets from weeds or poisons, than in leaving a sting behind it.' At any rate, the spleen should not be seen as paramount. For this, among other reasons, Kenneth Branagh's generous- spirited, unsplenetic production at the Riverside Studios is very welcome.

Those mourning the passing of classical- ly spoken blank verse may find only patchy comfort here, it is true. And those who prefer their Feste songs to be sung to traditional tunes may resist the contribu- tions of Paul McCartney and Pat Doyle to the musical side of the evening. For my part, I disliked the crooning ballads but enjoyed the occasional accompanying pas- sages. All the same, this is a skilfully wrought production — funny, moving and festive in its vaguely Edwardian Illyrian setting. Seasonal touches include generous helpings of false snow, a Christmas tree and an advent calendar programme. But it is Richard Briers's Malvolio who offers the most welcome cheer. At first sight it may have seemed just shrewd marketing by Branagh to cast a television sitcom star in the part, but Briers makes the part memor- ably his own, rising high above his cosy television persona.

The set, by Bunny Christie, is both skilful and serviceable. Shrouded at the back with white sheets, Illyria is an artful clutter of broken balustrades, odd pieces of furniture, bare wintry trees and, for Orsi- no's opening 'If music be the food of love' speech, a raised seat overlooking a graveyard. Despite its apparent bleakness, an essentially celebratory spirit lurks not far below the surface — vide Toby Belch's secret haul of liquor hidden beneath the hinged flap of one of the tombstones. Enter, in Scene III, the round, bearded, pink-cheeked form of Sir Toby Belch himself (James Saxon). 'You must come in earlier o'nights,' says Abigail McKern's sprightly, engaging Maria, as she obligingly pops an Alka Seltzer into his glass. James Saxon is a worthy leading reveller; Sir Andrew Aguecheek (James Simmons) his natural, credulous and absurdly funny gull.

Briers's first entrance — dressed in black, hair slicked down, nose in the air - bears the true stamp of Malvolio's sickly self-love; the pinched, overweening air of self-importance makes us all willing col- laborators in Maria's device to ridicule him. Immediately before the letter trick is sprung, his fantasies of preference are both ferocious and funny — Briers's eyes rolling dementedly as he fancies himself Count Malvolio, crushing Sir Toby and his follow- ers. Briers is very amusing in these scenes, as he is painfully moving later on when he realises how thoroughly he has been duped. It is a notable performance.

Of course, there are elements of harsh discord in the play. Malvolio, locked up as a madman, is cruelly treated, but he deserves it and his punishment is, more or less, just. Nor is Sir Toby just a genial bon viveur. He cruelly exploits Sir Andrew, but here too he is punished with a cracked skull from the martial Sebastian. It is a question of focus, of what elements you allow to prevail. Branagh admits the minor notes but allows harmony to prevail.

Anton Lesser's Feste, as well as sup- plying much of the play's humour, chan- nels those discordant elements. His clown is possessed of more than a merely profes- sional cynicism. For all his wit he is also genuinely weary at the world's folly — at times he seems driven with impatience. Lesser, looking like a hippy pop star on a low-budget tour, carries the role through — crooning ballads and all — with effort- less authority and pointed intensity. Final- ly, there is the unifying presence of Viola, played by Frances Barber with consider- able (if at times slightly forced) charm, humour and spirit. For once, this Viola makes a very plausible-looking twin to Christopher Hollis's Sebastian.

It is worth mentioning that Branagh's new enterprise, the Renaissance Theatre Company, is aimed at giving actors the chance to run and direct their own work. Productions between March and August next year include Much Ado About No- thing directed by Judi Dench, As You Like It directed by Geraldine McEwan and Hamlet directed by Derek Jacobi. On the evidence of this showing they should be really worth seeing too.

Apologies for two errors in my review of Ronald Harwood's J.J. Farr (28 Novem- ber). First to Julian Mitchell for attributing authorship of his play Another Country to Harwood (the Harwood play is Country Matters). Second to Hugh Whitemore for calling him Hugh Longmore. C. E.