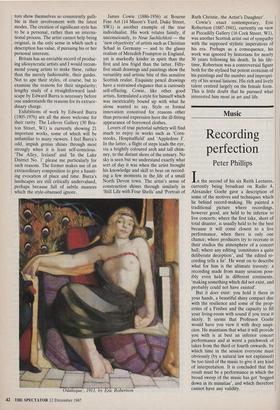 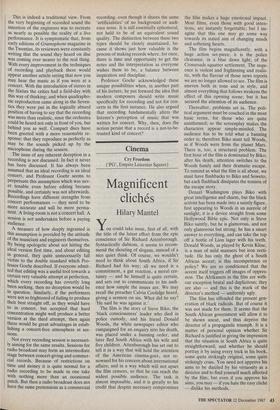 In the second of his six Reith Lectures, currently being broadcast on Radio 4, Alexander Goehr gave a description of some of the motives and techniques which lie behind record-making. He painted a traditional picture where recordings, however good, are held to be inferior to live concerts; where the first take, short of total disaster, is usually held to be the best because it will come closest to a live performance, when there is only one chance; where producers try to recreate in their studios the atmosphere of a concert hall; where any editing 'constitutes a quite deliberate deception', and 'the edited re- cording tells a lie'. He went on to describe what for him is the ultimate travesty: a recording made from many sessions poss- ibly even held in different continents, `making something which did not exist, and probably could not have existed'.

But it does exist: you hold it there in your hands, a beautiful shiny compact disc with the resilience and some of the prop- erties of a Frisbee and the capacity to fill your living-room with sound if you treat it nicely. It seems that Professor Goehr would have you view it with deep suspi- cion. He maintains that what it will provide you with is at best an inferior concert performance and at worst a patchwork of takes from the third or fourth onwards, by which time in the session everyone must obviously (by a natural law not explained) be too tired of the music to give it any kind of interpretation. It is concluded that the result must be a performance in which the broad sweep of the music has got 'bogged down in its minutiae', and which therefore cannot have any validity. This is indeed a traditional view. From the very beginning of recorded sound the intention of the engineers was to recreate as nearly as possible the reality of a live performance. It is symptomatic that, from early editions of Gramophone magazine in the Twenties, its reviewers were constantly writing that the sound they heard on disc was coming ever nearer to the real thing. With every improvement in the techniques of recording and playback there would appear another article saying that now you may hear the music as if you were at a concert. With the introduction of stereo in the Sixties the critics had a field-day with this way of thinking; and when quadrapho- nic reproduction came along in the Seven- ties they were put in the logically absurd position of having to say that the recording was more than realistic, since the orchestra could be heard not only in front of you, but behind you as well. Compact discs have been greeted with a more reasonable re- sponse: that they reproduce as perfectly as may be the sounds picked up by the microphone during the session. The issue of any inherent deception in a recording is not discussed. In fact it never has been discussed. It has always been assumed that an ideal recording is an ideal concert, and Professor Goehr seems to perpetuate this assumption which was nev- er tenable even before editing became possible, and certainly was not afterwards. Recordings have different strengths from concert performances — they need to be more accurate and will be more perma- nent. A living-room is not a concert hall. A session is not undertaken before a paying audience.

A measure of how deeply ingrained is this assumption is provided by the attitude of the musicians and engineers themselves. By being apologetic about not hitting the ideal version first time, and about editing in general, they quite unnecessarily fall victim to the double standard which Pro- fessor Goehr described. If everyone admit- ted that editing was a useful tool towards a certain very valuable attempt at perfection, which every recording has covertly long been seeking, then no deception would be in question. Similarly, if the performers were not so frightened of failing to produce their best straight off, as they would have to in concert, but accepted that hard concentration might well produce a better version at the third attempt, then again there would be great advantages in estab- lishing a concert-free atmosphere at ses- sions.

Not every recording session is necessari- ly aiming for the same results. Sessions for radio broadcast may form an intermediate stage between concert-giving and commer- cial records. Because of restrictions on time and money it is quite normal for a radio recording to be made in one take with nothing more than an occasional patch. But then a radio broadcast does not have the same pretensions as a commercial recording, even though it shares the same `artificialities' of no background or audi- ence noise. It is still essentially ephemeral, not held to be of an equivalent sound quality. The distinction between these two types should be clearly maintained, be- cause it shows just how valuable is the process of making records where, for once, there is time and opportunity to get the notes and the interpretation as everyone wishes them to be, a balance between inspiration and discipline.

Professor Goehr acknowledged these unique possibilities when, in another part of his lecture, he put forward the idea that modern composers should write music specifically for recording and not for con- certs in the first instance. He also argued that recording fundamentally alters the listener's perception of music that was written for concert. Why, then, does the notion persist that a record is a not-to-be- trusted kind of concert?