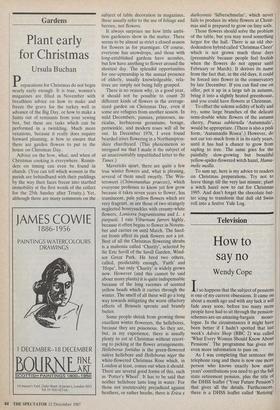 Preparations for Christmas do not begin nearly early enough. It is true, women's magazines are filled in November with breathless advice on how to make and freeze the gravy for the turkey well in advance of the Big Day, or how to make a Santa out of remnants from your sewing box, but these are tasks which can be performed in a twinkling. Much more vexatious, because it really does require forward planning, is how to ensure that there are garden flowers to put in the house on Christmas Day.

Advice on the how, what, and when of Christmas cooking is everywhere. Remin- ders on timing can even be found in church. (You can tell which women in the parish are behindhand with their puddings by the way their faces freeze into startled immobility at the first words of the collect for the 25th Sunday after Trinity.) Yet, although there are many comments on the subject of table decoration in magazines, these usually refer to the use of foliage and berries, not flowers.

It always surprises me how little ambi- tion gardeners show in the matter. There seems to be almost as strict a closed season for flowers as for ptarmigan. Of course, everyone has snowdrops, and those with long-established gardens have aconites, but few have anything to flower around the shortest day. The splendid opportunities for one-upmanship in the annual presence of elderly, usually knowledgeable, rela- tives are simply not being fully grasped.

There is no reason why, in a good year, it should not be possible to count 20 different kinds of flowers in the average- sized garden on Christmas Day, even if some are refugees from another season. In mild Decembers, pansies, primroses, au- riculas, herbaceous geraniums, borage, periwinkle, and modern roses will all be out. In December 1978, I even found bearded irises flowering in a Northampton- shire churchyard. (This phenomenon so intrigued me that I made it the subject of an unaccountably unpublished letter to the Times.) Mavericks apart, there are quite a few true winter flowers and, what is pleasing, several of them smell sweetly. The Win- tersweet (Chimonanthus praecox), which everyone professes to know yet few grow because it takes seven years to flower, has translucent, pale yellow flowers which are very fragrant, as are those of two strangely neglected honeysuckles with creamy-white flowers, Lonicera fragrantissima and L. x purpusii. I rate Viburnum farreri highly, because it often begins to flower in Novem- ber and carries on until March. The hard- est frosts affect its pink flowers not a jot. Best of all the Christmas flowering shrubs is a mahonia called 'Charity', selected by Sir Eric Savill of the. Savill Garden, Wind- sor Great Park. He bred two others, called, predictably enough, 'Faith' and `Hope', but only 'Charity' is widely grown now. However (and this cannot be said about many plants) it is quite indispensable because of the long racemes of scented yellow beads which it carries through the winter. The smell of all these will go a long way towards mitigating the worst olfactory effects of Brussels sprouts and brandy butter.

Some people shrink from growing those excellent winter flowerers, the hellebores, because they are poisonous. So they are, but, in my experience, there is usually plenty to eat at Christmas without resort- ing to picking at the flower arrangements. Helleborus foetidus is the green-flowered native hellebore and Helleborus niger the white-flowered Christmas Rose which, in London at least, comes out when it should. There are several good forms of this, such as 'Potter's Wheel'. It has to be said that neither hellebore lasts long in water. For those not irretrievably prejudiced against heathers, or rather heaths, there is Erica x darleyensis `Silberschmelze', which never fails to produce its white flowers at Christ- mas and is prepared to grow on limy soils.

Those flowers should solve the problem of the table, but you may need something larger for the hall. There is an old rho- dodendron hybrid called 'Christmas Cheer' which is not grown much these days (presumably because people feel foolish when the flowers do not appear until February or March). It derives its name from the fact that, in the old days, it could be forced into flower in the conservatory by late December. If you can find one on offer, pot it up in a large tub in autumn, bring it into a slightly heated greenhouse, and you could have flowers at Christmas.

To offset the solemn solidity of holly and ivy, some large branches of the delicate semi-double white flowers of the autumn cherry, Prunus subhirtella 'Autumnalis', would be appropriate. (There is also a pink form, 'Autumnalis Rosea'.) However, do not cut too much from it in its early years, until it has had a chance to grow from sapling to tree. The same goes for the painfully slow-growing but beautiful yellow-spider-flowered witch hazel, Hama- melis mollis.

To sum up, here is my advice to readers on Christmas preparations. Try not to leave things till the very last minute; plant a witch hazel now to cut for Christmas 1995. And don't forget the chocolate but- ter icing to transform that dull old Swiss roll into a festive Yule Log.