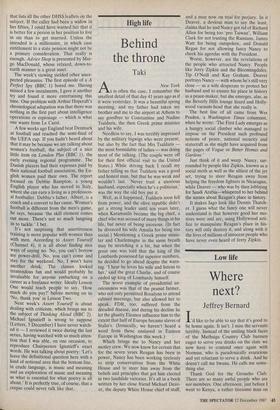 s is often the case, I remember the smallest detail of that day 41 years ago as if it were yesterday. It was a beautiful spring morning, and my father had taken my brother and me to the airport at Athens to say goodbye to Constantine and Nadine Tsaldaris, the then Greek prime minister and his wife.

Needless to say, I was terribly impressed by the military bigwigs who were present, but also by the fact that Mrs Tsaldaris the most formidable of ladies — was doing most of the talking. (The couple were off for their first official visit to the United States.) While driving back I recall my father telling us that Tsaldaris was a good and honest man, but that he was weak and wouldn't last. 'Never trust a uxorious husband, especially when he's a politician,' was the way the old boy put it.

Well, as it happened, Tsaldaris soon fell from power, and the olive republic didn't get a strong leader until ten years later, when Karamanlis became the big chief, a chief who was accused of many things in his life, but never of being uxorious. (In fact he divorced his wife Amalia for being too social.) Mentioning a Greek prime minis- ter and Charlemagne in the same breath may be stretching it a bit, but when the great one was told that the king of the Lombards possessed far superior numbers, he decided to go ahead despite the warn ing. 'I hear he loves his wife and listens to her,' said the great Charlie, and of course ended up king of Lombardy himself.

The worst example of presidential ux- oriousness was that of the peanut farmer, who not only permitted Rosalynn to attend cabinet meetings, but also allowed her to speak. FDR, too, suffered from the dreaded disease, and during his decline he let the ghastly Eleanor influence him to the extent that half of Europe became slaves of Stalin's. (Ironically, we haven't heard a word from those enslaved in Eastern Europe in Washington this week.) Which brings me to Nancy and her motley crew. We now know for certain that for the seven years Reagan has been in power, Nancy has been working tirelessly to strip conservatives from the White House and to steer him away from the beliefs and principles that got him elected in two landslide victories. It's all in a book written by her close friend Michael Deav- er, the deputy White House chief of staff, and a man now on trial for perjury. In it Deaver, a devious man to say the least, claims that he and Nancy got rid of Richard Allen for being too 'pro Taiwan', William Clark for not trusting the Russians, James Watt for being outspoken, and Donald Regan for not allowing fancy Nancy to check his agendas with the President.

Worse, however, are the revelations of the people who attracted Nancy. People like Jerry Zipkin and the Bloomingdales, Tip O'Neill and Kay Graham. Deaver portrays Nancy — with whom he's still very close — as a wife desperate to protect her husband and to ensure his place in history as a peace-maker, but she emerges, alas, as the Beverly Hills lounge lizard and Holly- wood vacuum-head that she really is.

The best line of all came from Wes Pruden, a Washington Times columnist, when he wrote: 'The First Lady emerges as a hungry social climber who managed to impose on the President such profound notions of peace, national security and statecraft as she might have acquired from the pages of Vogue or Better Homes and Gardens.'

Just think of it and weep. Nancy, sur- rounded by people like Zipkin, known as a social moth as well as the silliest of the jet set, trying to steer Reagan away from helping the freedom fighters in Nicaragua, while Deaver — who was by then lobbying for Saudi Arabia—whispered to her behind the scenes about Reagan's place in history.

It makes Iago look like Dennis Thatch- er. I guess what the fancy one will never understand is that however good her mo- tives were and are, using Hollywood arti- fice to manipulate Reagan's place in his- tory will only destroy it, and along with it the lives of millions of innocent people who have never even heard of Jerry Zipkin.