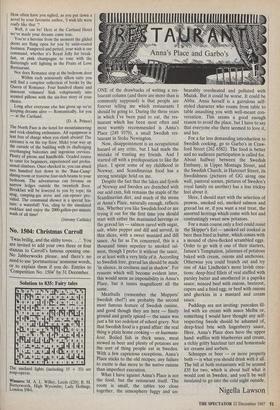 ONE of the drawbacks of writing a res- taurant column (and there are more than is commonly supposed) is that people are forever telling me which restaurants I should be going to. During the three years in which I've been paid to eat, the res- taurant which has been most often and most warmly recommended is Anna's Place (249 9379), a small Swedish res- taurant in Stoke Newington.

Now, disappointment is an occupational hazard of any critic, but I had made the mistake of trusting my friends. And I started off with a predisposition to like the place. I spent some of my childhood in Norway, and Scandinavian food has a strong nostalgic hold on me.

Despite the fact that the lakes and fjords of Norway and Sweden are drenched with our acid rain, fish remains the staple of the Scandinavian diet, and much of the menu at Anna's Place, naturally enough, reflects this. Whether you like Swedish food or are trying it out for the first time you should start with either the marinated herrings or the gravad lax — salmon cured with sugar, salt, white pepper and dill and served, in thin slices, with a sweet mustard and dill sauce. As far as I'm concerned, this is a thousand times superior to smoked sal- mon, though I prefer it without the sauce, or at least with a very little of it. According to Swedish lore, gravad lax should be made 'in silence, in coolness and in shadow'. For reasons which will become evident later, this would seem an impossibility in Anna's Place, but it tastes magnificent all the same.

Meatballs (remember the Muppets' Swedish chef?) are probably the second most famous feature of Swedish cuisine, and good though they are here — finely ground and gently spiced — the sauce was just a bit too redolent of school gravy. Not that Swedish food is a grand affair: the real thing is plain home cooking — or husmans- kost. Boiled fish in thick sauce, meat stewed in beer and plenty of potatoes are the sort of thing people eat in Sweden. With a few capricious exceptions, Anna's Place sticks to the old recipes; any failure to excite is due more to the native cuisine than imperfect execution.

What I have against Anna's Place is not the food, but the restaurant itself. The room is small, the tables too close together, the atmosphere fuggy and un- bearably overheated and polluted with Muzak. But it could be worse. It could be Abba. Anna herself is a garrulous self- styled character who roams from table to table assaulting you with well-meant con- versation. This seems a good enough reason to avoid the place, but I have to say that everyone else there seemed to love it, and her.

For a far less demanding introduction to Swedish cooking, go to Garbo's in Craw- ford Street (262 6582). The food is better and no audience participation is called for. About halfway between the Swedish Embassy, in Upper Montagu Street, and the Swedish Church, in Harcourt Street, its Swedishness (pictures of GG along one wall, pastoral scenes, pictures of Sweden's royal family on another) has a less tricksy feel about it.

Here, I should start with the selection of prawns, smoked eel, smoked salmon and gravad lax or, if you want a real treat, the assorted herrings which come with hot and contrastingly sweet new potatoes.

For a main course only a fool could resist the Skipper's Eel — smoked eel cooked in beer then fried in butter, which comes with a mound of chive-flecked scrambled eggs. Order to go with it one of their starters, Jansen's Temptation, juliennes of potatoes baked with cream, onions and anchovies. Otherwise you could branch out and try one of Ake Lindholm's more lavish crea- tions: deep-fried fillets of veal stuffed with parsley butter and smothered in a paprika sauce; minced beef with onions, beetroot, capers and a fried egg; or beef with onions and gherkins in a mustard and cream sauce.

Puddings are not inviting: pancakes fil- led with ice cream with sauce Melba or, something I would have thought any self- respecting Swede should be ashamed of, deep-fried brie with lingenberry sauce, Here, Anna's Place does have the upper hand: waffles with blueberries and cream, a richly gritty hazelnut tart and homemade ice creams and sorbets.

Schnapps or beer — or more properly both — is what you should drink with it all. The bill at both restaurants will be around £35 for two, which is about half what it would cost in Sweden, and you'll be well insulated to go into the cold night outside.