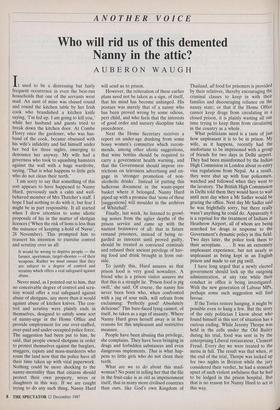 Who will rid us of this demented Nanny in the attic?

It used to be a distressing but fairly frequent occurrence in even the best-run households that one of the servants went mad. An aunt of mine was chased round and round the kitchen table by her Irish cook who brandished a kitchen knife saying, 'I'm fed up. I am going to kill you,' while her husband and guests tried to break down the kitchen door. At Combe Florey once the gardener, who was hus- band of the cook, became obsessed with his wife's infidelity and hid himself under her bed for three nights, emerging to denounce her anyway. My wife had a governess who took to squashing hamsters against the wall with a huge wardrobe, saying, 'That is what happens to little girls who do not clean their teeth.'

I am sorry to say that something of this sort appears to have happened to Nanny Hurd, previously such a calm and well- behaved member of Mrs Thatcher's staff. I hope I had nothing to do with it, but fear I might be in part responsible. It all started when I drew attention to some idiotic proposals of his in the matter of shotgun licences ('When the risk of lions is less than the nuisance of keeping a-hold of Nurse', 28 November). This prompted him to reassert his intention to exercise control and scrutiny over us all: It would be wrong to deprive people — the farmer, sportsman, target-shooter — of their weapons. Rather we must ensure that they are subject to a degree of control and scrutiny which offers a real safeguard against abuse.

Never mind, as I pointed out to him, that no conceivable degree of control and scru- tiny would offer a real safeguard against abuse of shotguns, any more than it would against abuse of kitchen knives. The con- trol and scrutiny were plainly ends in themselves, designed to satisfy some sort of nanny-urge in the Home Office and provide employment for our over-staffed, over-paid and under-occupied police force. The suggestion had been put to him, he said, that people owned shotguns in order to protect themselves against the burglars, muggers, rapists and mass-murderers who roam the land now that the police have all their time taken up with vital paperwork. Nothing could be more shocking to the nanny-mentality than that citizens should protect their own property, wives or daughters in this way. If we are caught trying to do any such thing, Nanny Hurd will send us to prison.

However, the reiteration of these earlier plans need not be taken as a sign, of itself, that his mind has become unhinged. His posture was merely that of a nanny who has been proved wrong by some odious, pert child, and who feels that the interests of good order and nursery discipline take precedence.

Next the Home Secretary receives a report on under-age drinking from some bossy women's committee which recom- mends, among other idiotic suggestions, that wine bottles should be required to carry a government health warning, and that the Government should impose res- trictions on television advertising and en- gage in 'stronger promotion of non- alcoholic drinks'. Instead Of putting this ludicrous document in the waste-paper basket where it belonged, Nanny Hurd piped up with a promise that 'none of these [suggestions] will moulder in the archives of Whitehall'.

Finally, last week, he listened to growl- ing noises from the uglier depths of the prison service and came up with the nastiest brainwave of all: that in future remand prisoners, instead of being re- garded as innocent until proved guilty, should be treated as convicted criminals and refused their ancient privilege of hav- ing food and drink brought in from out- side.

To justify this, Hurd assures us that prison food is very good nowadays. A friend who is a prison visitor assures me that this is a straight lie. 'Prison food is pig swill,' she said. Of course, the nanny has never been born who, when confronted with a jug of sour milk, will refrain from exclaiming: 'Perfectly good! Absolutely delicious!' This bare-faced lying cannot, of itself, be taken as a sign of insanity. Where Nanny Hurd gives herself away is in her reasons for this unpleasant and restrictive measure.

People have been abusing this privilege, she complains. They have been bringing in drugs and forbidden substances and even dangerous implements. That is what hap- pens to little girls who do not clean their teeth.

What are we to do about this mad- woman? No point in telling her that the file in the fruit-cake is as old as imprisonment itself, that in many more civilised countries than ours, like God's own Kingdom of Thailand, all food for prisoners is provided by their relatives, thereby encouraging the criminal classes to keep in with their families and discouraging reliance on the nanny state; or that if the Home Office cannot keep drugs from circulating in a closed prison, it is plainly wasting all our time trying to keep them from circulating in the country as a whole. What politicians need is a taste of just how unpleasant it is to be in prison. My wife, as it happens, recently had the misfortune to be imprisoned with a group of friends for two days in Delhi airport. They had been misinformed by the Indian High Commision in London about re-entry visa regulations from Nepal. As a result, they were shut up with four policemen, watched and followed when they went to the lavatory. The British High Commission in Delhi told them they would have to wait until next day when a Mr Sadler would be gracing the office. Next day Mr Sadler said he was frightfully sorry, but there really wasn't anything he could do. Apparently it is a reprisal for the treatment of Indians at Heathrow Airport, all of whom are being searched for drugs in response to the Government's dynamic policy in this field. Two days later, the police took them to their aeroplane. . . . It was an extremely unpleasant experience, but not nearly as unpleasant as being kept in an English prison and made to eat pig swill.

I have long urged that a newly elected government should lock up the outgoing administration, at any rate while their conduct in office is being investigated. With the new generation of Labour MPs, perhaps some such suggestion will find favour.

If the Tories restore hanging, it might be possible even to hang a few. But the story of the only politician I know about who found himself in this sort of situation has a curious ending. While Jeremy Thorpe was held in the cells under the Old Bailey during his trial, food was sent in by the enterprising Liberal restaurateur, Clement Freud. Every day we were treated to the menu in full. The result was that when, at the end of the trial, Thorpe was locked up for two nights in Brixton while the jury considered their verdict, he had a stomach upset of such violent awfulness that he had to be lodged in the prison hospital. But that is no reason for Nanny Hurd to act in this way.