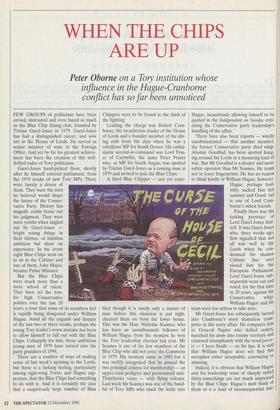 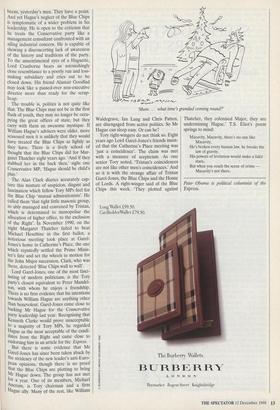 WHEN THE CHIPS ARE UP

Peter Oborne on a Tory institution whose

influence in the Hague-Cranbome conflict has so far been unnoticed

FEW GROUPS of politicians have been envied, distrusted and even hated as much as the Blue Chip dining club, founded by Tristan Garel-Jones in 1979. Garel-Jones has had a distinguished career, and now sits in the House of Lords. He served as senior minister of state in the Foreign Office. And yet by far his greatest achieve- ment has been the creation of this well- drilled cadre of Tory politicians.

Garel-Jones hand-picked them, shortly after he himself entered parliament, from the 1979 intake of new Tory MPs. There were barely a dozen of them. They were the men he believed would shape the future of the Conser- vative Party. History has magnifi- cently borne out his judgment. They were mere youths when singled out by Garel-Jones bright young things in their thirties, of limitless ambition but short on experience. In the event eight Blue Chips went on to sit in the Cabinet and one of them, John Major, became Prime Minister.

But the Blue Chips were much more than a mere school of talent. They have set the tone for high Conservative politics over the last 20 years, a tone that some of its members feel is rapidly being dissipated under William Hague. Amid all the anguish and despair of the last two or three weeks, perhaps the young Tory leader's worst mistake has been to allow himself to fall out with the Blue Chips. Unhappily for him, those ambitious young men of 1979 have turned into the party grandees of 1998.

There are a number of ways of making sense of last week's uprising in the Lords, but there is a lurking feeling, particularly among right-wing Tories and Hague sup- porters, that the Blue Chips had something to do with it. And it is certainly the case that a suspiciously large number of Blue Chippers were to be found in the thick of the fighting.

Leading the charge was Robert Cran- borne, the treacherous leader of the House of Lords and a founder member of the din- ing club from the days when he was a rebellious MP for South Dorset. His enthu- siastic second-in-command was Lord Fras- er of Carmyllie, the same Peter Fraser who, as MP for South Angus, was spotted by Tristan Garel-Jones as a coming man in 1979 and invited to join the Blue Chips.

A third Blue Chipper — not yet enno- bled though it is surely only a matter of time before this omission is put right, cheered them on from the lower house. This was the Hon. Nicholas Soames, who has been an unenthusiastic follower of William Hague from the moment he won the Tory leadership election last year. Mr Soames is one of the few members of the Blue Chip who did not enter the Commons in 1979. His moment came in 1983 but it was swiftly recognised that he passed the two prin6ipal criteria for membership — an upper-class pedigree and pronounced anti- Thatcherite views — with flying colours. Last week Mr Soames was one of the hand- ful of Tory MPs who stuck the knife into

Hague, incautiously allowing himself to be quoted in the Independent on Sunday criti- cising the Conservative party leadership's handling of the affair.

There have also been reports — wholly unsubstantiated — that another member, the former Conservative party chief whip, Alastair Goodlad, has been spotted hang- ing around the Lords in a menacing kind of way. But Mr Goodlad is a deeper and more subtle operator than Mr Soames. He tends not to leave fingerprints. He has no reason to think kindly of William Hague, however. Hague, perhaps fool- ishly, sacked him last summer and Good- lad is one of Lord Cran- borne's oldest friends.

Finally there was the lurking presence of Lord Garel-Jones him- self. It was Garel-Jones who, three weeks ago, first signalled that not all was well in the Lords when he con- demned the shadow Cabinet line over closed lists for the European Parliament. Lord Garel-Jones sub- sequently went out and voted, for the first time in 20 years, against the Mr Garel-Jones has subsequently turned into Cranborne's most shameless trum- peter in this sorry affair. He compares him to General Napier who defied orders, marched his army into enemy territory and returned triumphantly with the word pecca- vi — I have Sindh — on his lips. It is said that William Hague does not find this metaphor either acceptable, convincing or amusing.

Indeed, it is obvious that William Hague and his leadership team of sharply suited thirty-somethings are not much impressed by the Blue Chips. Hague's mob think of them as a a load of inconsequential has- beens, yesterday's men. They have a point. And yet Hague's neglect of the Blue Chips is symptomatic of a wider problem in his leadership. He is open to the criticism that he treats the Conservative party like a management consultant confronted with an ailing industrial concern. He is capable of showing a disconcerting lack of awareness of the history and traditions of the party. To the unsentimental eyes of a Hagueite, Lord Cranborne bears an astonishingly close resemblance to a poorly run and loss- making subsidiary and cries out to be closed down. His friend Alastair Goodlad may look like a passed-over non-executive director more than ready for the scrap- heap.

The trouble is, politics is not quite like that. The Blue Chips may not be in the first flush of youth, they may no longer be occu- pying the great offices of state, but they carry with them an awesome mystique. If William Hague's advisers were older, more seasoned men it is unlikely that they would have treated the Blue Chips as lightly as they have. There is a lively school of thought that the Blue Chips did for Mar- garet Thatcher eight years ago. 'And if they stabbed her in the back then,' sighs one Conservative MP, 'Hague should be child's play.'

The Alan Clark diaries accurately cap- ture this mixture of suspicion, disgust and fascination which fellow Tory MPs feel for the Blue Chip 'mutual admirationists'. He called them 'that tight little masonic group, so ably managed and convened by Tristan, which is determined to monopolise the allocation of higher office, to the exclusion of the Right'. In November 1990, on the night Margaret Thatcher failed to beat Michael Heseltine in the first ballot, a notorious meeting took place at Garel- Jones's home in Catherine's Place, the one which reputedly settled the Prime Minis- ter's fate and set the wheels in motion for the John Major succession. Clark, who was there, detected 'Blue Chips wall to wall'.

Lord Garel-Jones, one of the most fasci- nating of modern politicians, is the Tory party's closest equivalent to Peter Mandel- son, with whom he enjoys a friendship. There is no firm evidence that his intentions towards William Hague are anything other than benevolent. Garel-Jones came close to backing Mr Hague for the Conservative Party leadership last year. Recognising that Kenneth Clarke would prove unacceptable to a majority of Tory MPs, he regarded Hague as the most acceptable of the candi- dates from the Right and came close to endorsing him in an article for the Express. But there is some evidence that Mr Garel-Jones has since been taken aback by the stridency of the new leader's anti-Euro- pean opinions, though there is no proof that the Blue Chips are plotting to bring Mr Hague down. The group has not met for a year. One of its members, Michael Ancram, is Tory chairman and a firm Hague ally. Many of the rest, like William Mum . . . what time's grandad coming round?'

Waldegrave, Ian Lang and Chris Patten, are disengaged from active politics. So Mr Hague can sleep easy. Or can he?

Tory right-wingers do not think so. Eight years ago Lord Garel-Jones's friends insist- ed that the Catherine's Place meeting was `just a coincidence'. The claim was met with a measure of scepticism. As one senior Tory noted, Tristan's coincidences are not like other men's coincidences.' And so it is with the strange affair of Tristan Garel-Jones, the Blue Chips and the House of Lords. A right-winger said of the Blue Chips this week, 'They plotted against Thatcher, they colonised Major, they are undermining Hague.' T.S. Eliot's poem springs to mind:

Macavity, Macavity, there's no one like Macavity, He's broken every human law, he breaks the law of gravity.

His powers of levitation would make a fakir stare, But when you reach the scene of crime — Macavity's not there.

Peter Oborne is political columnist of the Express.