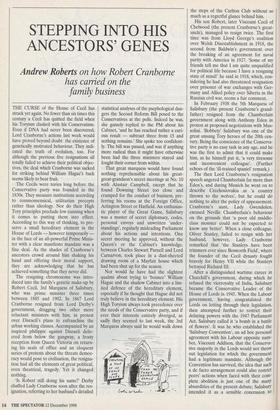 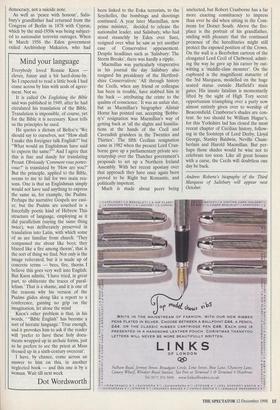 STEPPING INTO HIS ANCESTORS' GENES

Andrew Roberts on how Robert Cranbome

has carried on the family business

THE CURSE of the House of Cecil has struck yet again. No fewer than six times this century a Cecil has quitted the field when his Toryism clashed with his Conservatism. Even if DNA had never been discovered, Lord Cranborne's actions last week would have proved beyond doubt the existence of genetically motivated behaviour. They indi- cated the truth of evolution, too. For although the previous five resignations all totally failed to achieve their political objec- tives, the deal which Cranbome was sacked for striking behind William Hague's back seems likely to bear fruit.

The Cecils were tones long before the Conservative party was founded in the 1830s. They measure institutions according to commonsensical, utilitarian precepts rather than ideology. Nor do their High Tory principles preclude low cunning when it comes to putting them into effect. According to this way of thinking, to pre- serve a small hereditary element in the House of Lords — however temporarily in the face of an all-powerful Prime Minis- ter with a clear manifesto mandate was a fine deal. As the shades of Cranbome's ancestors crowd around him shaking his hand and offering their moral support, they are acknowledging that he has achieved something that they never did.

The resigning chromosome was intro- duced into the family's genetic make-up by Robert Cecil, 3rd Marquess of Salisbury, who was prime minister three times between 1885 and 1902. In 1867 Lord Cranborne resigned from Lord Derby's government, dragging two other more reluctant ministers with him, in protest over Disraeli's plans to enfranchise the urban working classes. Accompanied by an inspired philippic against Disraeli deliv- ered from below the gangway, a frosty reception from Queen Victoria on return- ing his seals of office and an eloquent series of protests about the threats democ- racy would pose to civilisation, the resigna- tion had all the elements of great political, even theatrical, tragedy. Yet it changed nothing.

'Is Robert still doing his sums?' Derby chaffed Lady Cranborne soon after the res- ignation, referring to her husband's detailed statistical analyses of the psephological dan- gers the Second Reform Bill posed to the Conservatives at the polls. Indeed he was, she gamely replied to the PM about his Cabinet, 'and he has reached rather a curi- ous result — subtract three from 15 and nothing remains.' She spoke too confident- ly. The bill was passed, and was if anything more radical than it might have otherwise been had the three ministers stayed and fought their corner from within.

That great marquess would have found nothing reprehensible about his great- great-grandson's secret meetings at No. 10 with Alastair Campbell, except that he found Downing Street too close and cramped for the conduct of business, pre- ferring his rooms at the Foreign Office, Arlington Street or Hatfield. An enthusias- tic player of the Great Game, Salisbury was a master of secret diplomacy, codes, personal envoys and unwritten 'under- standings', regularly misleading Parliament about his actions and intentions. One secret meeting he approved, without the Queen's or the Cabinet's knowledge, between Charles Stewart Parnell and Lord Camarvon, took place in a dust-sheeted drawing room of a Mayfair house which had been shut up for the season.

Nor would he have had the slightest qualms about trying to 'bounce' William Hague and the shadow Cabinet into a lim- ited defence of the hereditary element, especially if he thought that Hague did not truly believe in the hereditary element. His High Toryism always took precedence over the needs of the Conservative party, and if ever their interests entirely diverged, as sadly they seemed to last week, the 3rd Marquess always said he would walk down the steps of the Carlton Club without so much as a regretful glance behind him.

His son Robert, later Viscount Cecil of Chelwood (the present Cranborne's great- uncle), managed to resign twice. The first time was from Lloyd George's coalition over Welsh Disestablishment in 1918, the second from Baldwin's government over the breaking of an agreement for naval parity with America in 1927. 'Some of my friends tell me that I am quite unqualified for political life because I have a resigning state of mind!' he said in 1918, which, con- sidering he had also threatened resignation over prisoner of war exchanges with Ger- many and Allied policy over Siberia in the Russian civil war, seems a fair comment.

In February 1938 the 5th Marquess of Salisbury (the present Cranborne's grand- father) resigned from the Chamberlain government along with Anthony Eden in protest at proposed negotiations with Mus- solini. 'Bobbety' Salisbury was one of the great unsung Tory heroes of the 20th cen- tury. Being the conscience of the Conserva- tive party is no easy task in any age, and he was the first to admit that it could make him, as he himself put it, 'a very tiresome and inconvenient colleague'. (Further echoes of the 'ill-trained spaniel' remark.) The then Lord Cranborne's resignation speech angered Chamberlain far more than Eden's, and during Munich he went on to describe Czechoslovakia as 'a country thrown to the wolves', but he could do nothing to alter the policy of appeasement. Cranborne's aunt, Lady Gwendolen, excused Neville Chamberlain's behaviour on the grounds that 'a poor old middle- class monster could not be expected to know any better'. When a close colleague, Oliver Stanley, failed to resign with her husband, however, Lady Cranborne remarked that 'the Stanleys have been trimmers ever since Bosworth Field', where the founder of the Cecil dynasty fought bravely for Henry VII while the Stanleys betrayed Richard III.

After a distinguished wartime career in Churchill's government, during which he refused the viceroyalty of India, Salisbury became the Conservative Leader of the House of Lords in 1945. When the Labour government, having congratulated the Lords on letting through their legislation, then attempted further to restrict their delaying powers with the 1947 Parliament Act, Salisbury called it 'a bomb in a battle of flowers'. It was he who established the `Salisbury Convention', an ad hoc personal agreement with his Labour opposite num- ber, Viscount Addison, that the Conserva- tive majority in the Lords would not throw out legislation for which the government had a legitimate mandate. Although the Convention has survived, the idea that such a de facto arrangement could also restrict peers' actions when faced with their com- plete abolition is just one of the many absurdities of the present debate; Salisbury intended it as a sensible concession to democracy, not a suicide note.

As well as 'peace with honour', Salis- bury's grandfather had returned from the Congress of Berlin in 1878 with Cyprus, which by the mid-1950s was being subject- ed to nationalist terrorist outrages. When in March 1956 the Eden government exiled Archbishop Makarios, who had been linked to the Eoka terrorists, to the Seychelles, the bombings and shootings continued. A year later Macmillan, now prime minister, decided to release the nationalist leader, and Salisbury, who had stood staunchly by Eden over Suez, resigned over what he saw as yet another case of Conservative appeasement. Despite headlines such as 'Salisbury: The Storm Breaks', there was hardly a ripple.

Macmillan was particularly vituperative in his journal the day Salisbury also resigned his presidency of the Hertford- shire Conservatives: 'All through history the Cecils, when any friend or colleague has been in trouble, have stabbed him in the back — attributing the crime to the qualms of conscience.' It was an unfair slur, but as Macmillan's biographer Alistair Horne has pointed out, accepting 'Bobbe- ty's' resignation was Macmillan's way of getting back at 'all the slights and humilia- tions at the hands of the Cecil and Cavendish grandees in the Twenties and Thirties'. The fifth Cecilian resignation came in 1982 when the present Lord Cran- borne gave up a parliamentary private sec- retaryship over the Thatcher government's proposals to set up a Northern Ireland Assembly. With her recent apostasy over that approach they have once again been proved to be Right but Romantic, and politically impotent.

Much is made about peers being unelected, but Robert Cranborne has a far more exacting constituency to impress than ever he did when sitting in the Com- mons for Dorset South. Above the fire- place is the portrait of his grandfather, smiling with pleasure that the continued presence of the hereditaries might still protect the exposed position of the Crown. On the wall is a Beerbohm cartoon of the elongated Lord Cecil of Chelwood, admir- ing the way he gave up his career by out- witting a 'middle-class monster'. On the cupboard is the magnificent statuette of the 3rd Marquess, modelled on the huge seated statue outside Hatfield's main gates. His innate fatalism is momentarily lifted by the sight of High Tory secret opportunism triumphing over a party now almost entirely given over to worship of Beaconsfield. Cranbome's shades are con- tent. So too should be William Hague's, for this Yorkshire lad has closed the most recent chapter of Cecilian history, follow- ing in the footsteps of Lord Derby, Lloyd George, Stanley Baldwin, Neville Cham- berlain and Harold Macmillan. But per- haps those shades would be wise not to celebrate too soon. Like all great houses with a curse, the Cecils will doubtless one day be back.

Andrew Roberts's biography of the Third Marquess of Salisbury will appear next October.