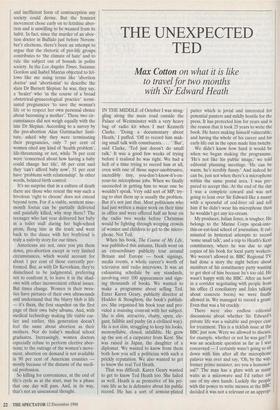 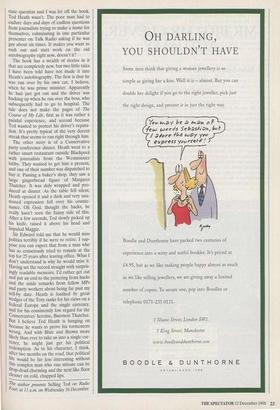 Max Cotton on what it is like to travel for two months with Sir Edward Heath IN THE MIDDLE of October I was strug- gling along the main road outside the Palace of Westminster with a very heavy bag of radio kit when I met Kenneth Clarke. 'Doing a documentary about Heath,' I puffed. 'Off to record him mak- ing small talk with constituents. . . . "But', said Clarke, 'Ted just doesn't do small talk.' It was a good few weeks of trying before I realised he was right. We had a hell of a time trying to record him at all, even with one of those super-unobtrusive, incredibly tiny, you-don't-know-it's-on- your-tie microphone jobs. When we finally succeeded in getting him to wear one he wouldn't speak. Very odd sort of MP; try- ing to shut them up is usually the problem. But it's not just that. Most politicians who had just written a major work on their time in office and were offered half an hour on the radio two weeks before Christmas would be fighting through weeping crowds of women and children to get to the micro- phone. Not Ted.

When his book, The Course of My Life, was published this autumn, Heath went on an extraordinary publicity tour around Britain and Europe — book signings, media events, a whole career's worth of television and radio interviews. It was an exhausting schedule by any standards, involving over 100 appearances and sign- ing thousands of books. We wanted to make a programme about selling Ted. Enter Karen Geary, publicity director at Hodder & Stoughton, the book's publish- ers. She organised his book tour and pro- vided a stunning contrast with her subject. She is slim, attractive, chatty, open, ele- gant, fallible and pushy (in a civilised way). He is not slim, struggling to keep his looks, monosyllabic, closed, infallible. He grew up the son of a carpenter from Kent. She was raised in Japan, the daughter of a diplomat. We wanted to know from them both how you sell a politician with such a prickly reputation. We also wanted to get to know the real Ted Heath.

That was difficult. Karen Geary wanted to get to know Ted Heath too. She failed as well. Heath is as protective of his pri- vate life as he is defensive about his public record. He has a sort of armour-plated patter which is jovial and interested for potential punters and mildly hostile for the press. It has protected him for years and is the reason that it took 25 years to write the book. He hates making himself vulnerable, and having the whole of his career and his early life out in the open made him twitchy.

We didn't know how hard it would be when we began making the programme. `He's not like his public image,' we told editorial planning meetings. 'He can be warm, he's terribly funny.' And indeed he can be, just not when there's a microphone within the same postal area. I was pre- pared to accept this. At the end of the day I was a complete coward and was not going to lean over Sir Edward like a nanny with a spoonful of cod-liver oil and tell him if he didn't wear his microphone then he wouldn't get any ice-cream.

My producer, Julian Joyce, is tougher. He belongs to the Marine Corps speak-into- this-or-eat-lead school of journalism. It cul-_ minated in hysterical attempts to record `some small talk', and a trip to Heath's Kent constituency, where he was due to sign copies of his book for local party workers. We weren't allowed in. BBC Regional TV had done a story the night before about members of his constituency party wanting to get shot of him because he's too old. He wasn't happy with the BBC. After an hour in a corridor negotiating with people from his office (I conciliatory and Jules talking about concrete boots) we were finally allowed in. We managed to record a grunt. Even that was a bit crackly. There were also endless editorial discussions about whether Sir Edward's private life was a suitable and proper case for treatment. This is a ticklish issue at the BBC just now. Were we allowed to discuss, for example, whether or not he was gay? It was an academic question as far as I was concerned — I certainly wasn't going to it down with him after all the microphone palaver was over and say, 'Oh, by the way, former prime minister, are you a homosex- ual?' The man has a glare with as many watts as a microwave and I'd rather eat one of my own hands. Luckily the people with the power to write memos at the BBC decided it was not a relevant or an approp- riate question and I was let off the hook. Ted Heath wasn't. The poor man had to endure days and days of endless questions from journalists trying to make a name for themselves, culminating in one particular presenter on Talk Radio asking if he was gay about six times. It makes you want to rush out and start work on the old autobiography right now, doesn't it?

The book has a wealth of stories in it that are completely new, but two little tales I have been told have not made it into Heath's autobiography. The first is that he was run over by his own car, I believe, when he was prime minister. Apparently he had just got out and the driver was backing up when he ran over the boss, who subsequently had to go to hospital. The tale does not make the pages of The Course of My Life, first as it was rather a painful experience, and second because Ted wanted to protect his driver's reputa- tion. It's pretty typical of the very decent streak that seems to run right through him.

The other story is of a Conservative party conference dinner. Heath went to a rather smart restaurant outside Blackpool with journalists from the Westminster lobby. They wanted to get him a present, and one of their number was dispatched to buy it. Passing a baker's shop, they saw a large gingerbread figure of Margaret Thatcher. It was duly wrapped and pro- duced at dinner. As the table fell silent, Heath opened it and a dark and very una- mused expression fell over his counte- nance. Oh God, thought the hacks, he really hasn't seen the funny side of this. After a few seconds, Ted slowly picked up his knife, raised it above his head and Impaled Maggie.

Sir Edward told me that he would miss politics terribly if he were to retire. I sup- pose you can expect that from a man who has so consciously tried to remain at the top for 25 years after leaving office. What I don't understand is why he would miss it. Having set the record straight with surpris- ingly readable memoirs, I'd rather get out and put an end to the pestering from hacks and the snide remarks from fellow MPs and party workers about being far past my sell-by date. Heath is loathed by great Wedges of the Tory ranks for his views on a federal Europe and the single currency, and for his consistently low regard for the Conservatives' heroine, Baroness Thatcher. But I believe Ted Heath is hanging on because he wants to prove his tormentors wrong. And with Blair and Brown more likely than ever to take us into a single cur- rency, he might just get his political redemption. As to his character, I think, after two months on the road, that political life would be far less interesting without this complex man who one minute can be drop-dead charming and the next like floor cleaner on cold, chapped lips.

The author presents Selling Ted on Radio Pour, at 11 a.m. on Wednesday 16 December.