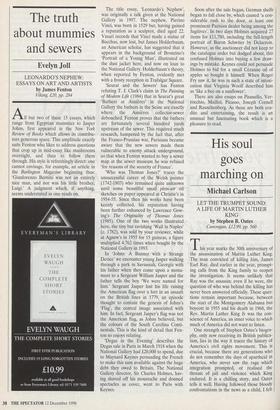 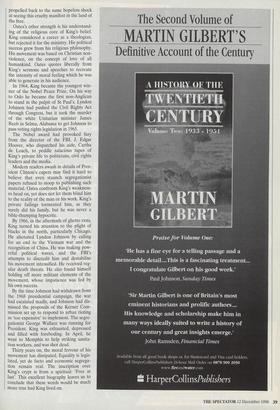 His soul goes marching on

LET THE TRUMPET SOUND: A LIFE OF MARTIN LUTHER KING by Stephen B. Oates Canongate, £12.99, pp. 560 This year marks the 30th anniversary of the assassination of Martin Luther King. The man convicted of killing him, James Earl Ray, died earlier in the year, prompt- ing calls from the King family to reopen the investigation. It seems unlikely that Ray was the assassin; even if he were, the question of who was behind the killing has never been answered officially. These ques- tions remain important because, between the start of the Montgomery Alabama bus boycott in 1955 and his death in 1968, the Rev. Martin Luther King Jr was the con- science of America, an inner voice to which much of America did not want to listen.

One strength of Stephen Oates's biogra- phy, only now receiving its British publica- tion, lies in the way it traces the history of America's civil rights movement. This is crucial, because there are generations who do not remember the days of apartheid in America, who never saw the rage which integration prompted, or realised the threats of jail and violence which King endured. It is a chilling story, and Oates tells it well. Having followed those bloody confrontations in the news as a child, I felt propelled back to the same hopeless shock at seeing this cruelty manifest in the land of the free.

Oates's other strength is his understand- ing of the religious core of King's belief. King considered a career as a theologian, but rejected it for the ministry. His political success grew from his religious philosophy. His movement was based on Christian non- violence, on the concept of love of all humankind. Oates quotes liberally from King's sermons and speeches to recreate the intensity of moral feeling which he was able to generate in his audience.

In 1964, King became the youngest win- ner of the Nobel Peace Prize. On his way to Oslo he became the first non-Anglican to stand in the pulpit of St Paul's. Lyndon Johnson had pushed the Civil Rights Act through Congress, but it took the murder of the white Unitarian minister James Reeb in Selma, Alabama to get Johnson to pass voting rights legislation in 1965.

The Nobel award had provoked fury from the director of the FBI, J. Edgar Hoover, who dispatched his aide, Cartha de Loach, to peddle salacious tapes of King's private life to politicians, civil rights leaders and the media.

Modern readers awash in details of Pres- ident Clinton's capers may find it hard to believe that even staunch segregationist papers refused to stoop to publishing such material. Oates confronts King's weakness- es head on, yet does not let them blind him to the reality of the man or his work. King's private failings tormented him, as they surely did his family, but he was never a bible-thumping hypocrite.

By 1966, in the aftermath of ghetto riots, King turned his attention to the plight of blacks in the north, particularly Chicago. He alienated Lyndon Johnson by calling for an end to the Vietnam war and the recognition of China. He was making pow- erful political waves, and the FBI's attempts to discredit him and destabilise his movement intensified. He received reg- ular death threats. He also found himself holding off more militant elements of the movement, whose impatience was fed by his own success.

By the time Johnson had withdrawn from the 1968 presidential campaign, the war had escalated madly, and Johnson had dis- missed the proposals of the Kerner Com- mission set up to respond to urban rioting as 'too expensive' to implement. The segre- gationist George Wallace was running for President. King was exhausted, depressed and filled with foreboding. In April, he went to Memphis to help striking sanita- tion workers, and was shot dead.

Thirty years on, the moral fervour of his movement has dissipated. Equality is legis- lated, yet de facto and economic segrega- tion remain real. The inscription over King's crypt is from a spiritual: 'Free at last'. This excellent biography leaves us to conclude that these words would be much more true had King lived on.