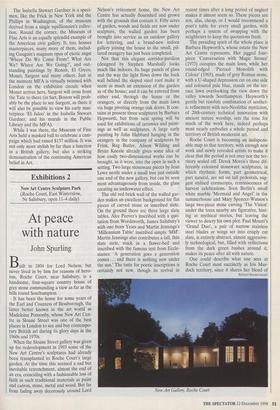 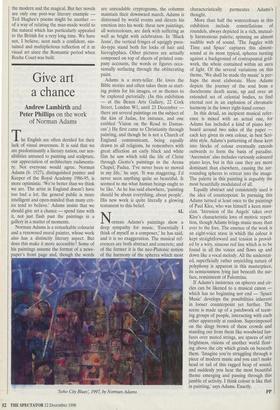 At peace with nature

Built in 1804 for Lord Nelson, but never lived in by him for reasons of hero- ism, Roche Court, near Salisbury, is a handsome, four-square country house of grey stone commanding a view as far as the hills round Southampton.

It has been the home for some years of the Earl and Countess of Bessborough, the latter better known in the art world as Madeleine Ponsonby, whose New Art Cen- tre in Sloane Street was one of the best places in London to see and buy contempo- rary British art during its glory days in the 1960s and 1970s.

When the Sloane Street gallery was given up for redevelopment in 1993 some of the New Art Centre's sculptures had already been transplanted to Roche Court's large garden. At the time this seemed a sad but inevitable retrenchment, almost the end of an era, coinciding with a fashionable loss of faith in such traditional materials as paint and canvas, stone, metal and wood. But far from fading away decorously around Lord Nelson's retirement home, the New Art Centre has actually flourished and grown with the grounds that contain it. Fifty acres of garden, woods and fields are now under sculpture, the walled garden has been brought into service as an outdoor gallery for lettering, and a brand-new indoor gallery joining the house to the small, pil- lared orangery has just been completed.

Not that this elegant corridor/pavilion (designed by Stephen Marshall) looks much like indoors. Its huge panels of glass and the way the light flows down the back wall behind the sloped steel roof make it seem as much an extension of the garden as of the house; and it can be entered from either end, through the house or the orangery, or directly from the main lawn via huge pivoting orange oak doors. It con- tains at present three sculptures by Barbara Hepworth, but from next spring will be used for exhibitions of ceramics and paint- ings as well as sculptures. A large early painting by John Hubbard hanging in the orangery in the company of sculptures by Frink, Reg Butler, Alison Wilding and Bryan Kneale already gives some idea of how easily two-dimensional works can be brought, as it were, into the open in such a setting. Two large stoneware pieces by Jean Lowe nestle under a small tree just outside one end of the new gallery, but can be seen most advantageously from inside, the glass creating an underwater effect.

The old red brick wall of the walled gar- den makes an excellent background for flat pieces of carved stone or inscribed slate. On the ground there are three large slate tables, Alec Peever's inscribed with a quo- tation from Wordsworth, James Salisbury's with one from Yeats and Martin Jennings's `Millennium Table' inscribed simply 'MM'. Martin Jennings also contributes a tall, thin slate stele, stuck in a flower-bed and inscribed with the famous text from Eccle- siastes: 'A generation goes a generation comes ... and there is nothing new under the sun.' The taste for poetic inscriptions is certainly not new, though its revival in recent times after a long period of neglect makes it almost seem so. These pieces are not, alas, cheap, or I would recommend a poet's table for every small garden, with perhaps a system of swapping with the neighbours to keep the quotations fresh.

The presiding spirit of the whole place is Barbara Hepworth's, whose estate the New Art Centre represents. Her jagged four- piece 'Conversation with Magic Stones' (1973) occupies the main lawn, while her round-edged 'Pierced Monolith with Colour' (1965), made of grey Roman stone, with a U-shaped depression cut on one side and coloured pale blue, stands on the ter- race lawn overlooking the view down the valley towards Southampton. Hepworth's gentle but resolute combination of aesthet- ic refinement with neo-Neolithic mysticism, of 20th-century technical innovation with ancient nature worship, sets the tone for much of the work here, indeed perhaps most nearly embodies a whole period and territory of British modernist art.

Roche Court is becoming an indispens- able map to that territory, with enough new work and newly revealed artists to make it clear that the period is not over nor the ter- ritory sealed off. Derek Morris's three dif- ferently coloured stoneware sculptures, in which rhythmic forms, part geometrical, part natural, are set on tall pedestals, sug- gest stylised cornucopia, reminiscences of harvest celebrations. Sven Berlin's small white marble 'Mermaid and Angel' in the summerhouse and Mary Spencer-Watson's large two-piece stone carving 'The Vision' under the trees nearby are figurative, hint- ing at mythical stories, but leaving the viewer to descry his own plot. Paul Mount's `Grand Duo', a pair of narrow stainless steel blades or wings set into crisply cut slate, is entirely abstract, almost aggressive- ly technological, but, filled with reflections from the dark green bushes around it, makes its peace after all with nature.

One could describe what one sees at Roche Court most succinctly as Iris Mur- doch territory, since it shares her blend of New Art Gallery, Roche Court the modern and the magical. But her novels are only one post-war literary example Ted Hughes's poems might be another of a way of relating the man-made world to the natural which has particularly appealed to the British for a very long time. We have not, I believe, seen such a confident, sus- tained and multiplicitous reflection of it in visual art since the Romantic period when Roche Court was built.