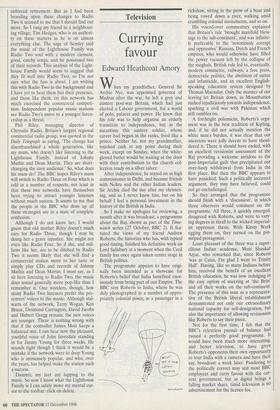 When my grandfather, General Sir Archie Nye, was appointed governor of Madras after the war, he left a grey and austere post-war Britain, which had just elected a Labour government, for a world of polo, palaces and power. He knew that his role was to help organise an orderly transition to independence, but in the meantime this austere soldier, whose career had begun in the ranks, lived like a prince. Neither he, nor my grandmother, touched cash at any point during their week, except on Sunday, when the white- gloved butler would be waiting at the door with their contribution to the church col- lection ready on a silver salver.

After independence, he stayed on as high commissioner in Delhi, and became friends with Nehru and the other Indian leaders. Sir Archie died the day after my christen- ing, and so I never knew him, but on his behalf I feel a personal investment in the history of the British in India.

So I make no apologies for reviewing, a month after it was broadcast, a programme about the Raj, shown as part of the Time- watch series (27 October, BBC 2). It fea- tured the views of my friend Andrew Roberts, the historian who has, with typical good timing, finished his definitive work on Lord Salisbury at a moment when the Cecil family has once again taken centre stage in British politics.

The programme appears to have origi- nally been intended as a showcase for Roberts's belief that India benefited enor- mously from being part of our Empire. The BBC sent Roberts to India, where he was duly photographed in a number of appro- priately colonial poses; as a passenger in a rickshaw, sitting in the prow of a boat and being rowed down a river, walking amid crumbling colonial monuments, and so on.

His voiced-over commentary explained that Britain's rule 'brought manifold bless- ings to the sub-continent', and was infinite- ly preferable to the 'notoriously corrupt and oppressive' Russian, Dutch and French empires, who would otherwise have filled the power vacuum left by the collapse of the moghuls. British rule led to, eventually, modern commerce, railways, a free press, democratic politics, the abolition of suttee and infanticide, and an excellent English- speaking education system designed by Thomas Macaulay. Only the manner of our leaving let Britain down, as Mountbatten rushed injudiciously towards independence, sparking a civil war with Pakistan which still rumbles on.

A forthright polemicist, Roberts's argu- ment was in the best tradition of Kipling, and, if he did not actually mention the white man's burden, it was clear that our ancestors were jolly decent to have shoul- dered it. There it should have ended, with an excellent revisionist assessment of the Raj providing a welcome antidote to the post-Imperialist guilt that precipitated our over-hasty withdrawal from India in the first place. But then the BBC appears to have panicked. Such a politically incorrect argument, they may have believed, could not go unchallenged.

So they arranged that the programme should finish with a 'discussion', in which three observers would comment on the programme. All three, it quickly emerged, disagreed with Roberts, and were to vary- ing degrees in thrall to the wicked imperial- ist oppressor thesis. With Kirsty Wark egging them on, they turned on the pin- striped protagonist.

Least pleasant of the three was a super- cilious Indian academic, Mani Shankar Aiyar, who remarked that, since Roberts `was at Caius, I'm glad I went to Trinity Hall'. Having, like so many Indians before him, received the benefit of an excellent British education, he was now indulging in the easy option of sneering at 'the Brits' and all their works on the sub-continent. The presence of this man as a representa- tive of the British liberal establishment demonstrated not only our extraordinary national capacity for self-denigration, but also the importance of allowing revisionists like Roberts to say their piece.

Not for the first time, I felt that the BBC's relentless pursuit of balance had ruined a perfectly good programme. It would have been much more interesting, and better television, to have given Roberts's opponents their own opportunity to tour India with a camera and have their say, broadcast a week later. Pandering to the politically correct may suit most BBC employees and curry favour with the cur- rent government, but as digital brings a falling market share, timid television is no advertisement for the licence fee.