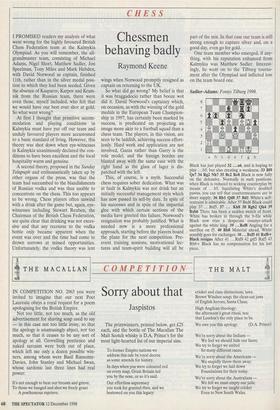 I PROMISED readers my analysis of what went wrong for the highly favoured British Chess Federation team at the Kalmykia Olympiad. As you will remember, the all- grandmaster team, consisting of Michael Adams, Nigel Short, Matthew Sadler, Jon Speelman, Tony Miles and Mark Hebden, with David Norwood as captain, finished 11th, rather than in the silver medal posi- tion to which they had been seeded. Given the absence of Kasparov, Karpov and Kram- nik from the Russian team, there were even those, myself included, who felt that we would have our best ever shot at gold. So what went wrong?

At first I thought that primitive accom- modation and playing conditions in Kalmykia must have put off our team and unduly favoured players more accustomed to a basic standard of living. However, this theory was shot down when eye-witnesses in Kalmykia unanimously declared the con- ditions to have been excellent and the local hospitality warm and genuine.

A second theory, proposed in the Sunday Telegraph and enthusiastically taken up by other organs of the press, was that the team had succumbed to the blandishments of Russian vodka and was thus unable to concentrate on the chess. This too appears to be wrong. Chess players often unwind with a drink after the game but, again, eye- witnesses including Stewart Reuben, the Chairman of the British Chess Federation, are quite clear that drinking was not exces- sive and that any recourse to the vodka bottle only became apparent when the event was over and the time had come to drown sorrows at missed opportunities. Unfortunately, the vodka theory was lent wings when Norwood promptly resigned as captain on returning to the UK.

So what did go wrong? My belief is that it was braggadocio rather than booze wot did it. David Norwood's captaincy which, on occasion, as with the winning of the gold medals in the European Team Champion- ship in 1997, has certainly been marked by success, is predicated on projecting an image more akin to a football squad than a chess team. The players, in this vision, are seen to be laddish, achieving success effort- lessly. Hard work and application are not involved, Gazza rather than Garry is the role model, and the foreign hordes are blasted away with the same ease with the right hand as the glass of lager is dis- patched with the left.

This, of course, is a myth. Successful chess requires sober dedication. What was at fault in Kalmykia was not drink but an initially successful management style which has now passed its sell-by date. In spite of his successes and in spite of the impartial glee with which certain sections of the media have greeted this failure, Norwood's resignation was probably justified. What is needed now is a more professional approach, starting before the players board the plane for the next competition. Pre- event training sessions, motivational lec- tures and team-spirit building will all be part of the mix. In that case our team is still strong enough to capture silver and, on a good day, even go for gold.

One team member who emerged, if any- thing, with his reputation enhanced from Kalmykia was Matthew Sadler. Interest- ingly, he went on to the Tilburg tourna- ment after the Olympiad and inflicted loss on the team board one.