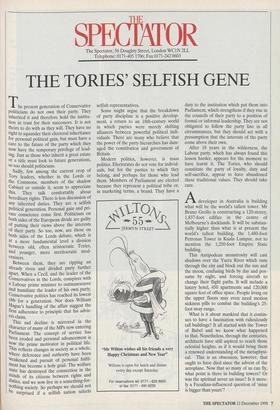 The present generation of Conservative politicians do not own their party. They inherited it and therefore hold the institu- tion in trust for their successors. It is not theirs to do with as they will. They have no right to squander their electoral inheritance for personal political gain, but must have a care to the future of the party which they now have the temporary privilege of lead- ing. Just as those who inherit a great estate or a title must look to future generations, so too should politicians.

Sadly, few among the current crop of Tory leaders, whether in the Lords or the Commons, members of the shadow Cabinet or outside it, seem to appreciate this. They talk comfortably about hereditary rights. There is less discussion of any inherited duties. They are a selfish political generation. Personal gain and pri- vate conscience come first. Politicians on both sides of the European divide are guilty of putting their views above the interests of their party. So too, now, are those on both sides of the Lords debate, which is at a more fundamental level a division between old, often aristocratic Tories, and younger, more meritocratic mod- ernisers.

Between them, they are ripping an already riven and divided party further apart. When a Cecil, and the leader of the Conservatives in the Lords, conspires with a Labour prime minister to outmanoeuvre and humiliate the leader of his own party, Conservative politics has reached its lowest ebb for a generation. Nor does William Hague's handling of the affair suggest the firm adherence to principle that his advis- ers claim.

This sad decline is mirrored in the character of many of the MPs now entering Parliament. The concept of service has been eroded and personal advancement is now the prime motivator in political life. This reflects changes in society as a whole. where deference and authority have been Weakened and pursuit of personal fulfil- ment has become a holy grail. The welfare state has destroyed the connection in the minds of its citizens between rights and duties, and we now live in a something-for- nothing society. So perhaps we should not °e surprised if a selfish nation selects

Some might argue that the breakdown of party discipline is a positive develop- ment, a return to an 18th-century world in which parties were merely shifting alliances between powerful political indi- viduals. There are many who believe that the power of the party hierarchies has dam- aged the constitution and government of Britain.

Modern politics, however, is mass politics. Electorates do not vote for individ- uals, but for the parties to which they belong, and perhaps for those who lead them. Members of Parliament are elected because they represent a political tribe or, in marketing terms, a brand. They have a

duty to the institution which put them into Parliament, which strengthens if they rise in the councils of their party to a position of formal or informal leadership. They are not obligated to follow the party line in all circumstances, but they should act with a presumption that the interests of the party come above their own.

After 18 years in the wilderness, the Labour party, which has always found this lesson harder, appears for the moment to have learnt it. The Tories, who should constitute the party of loyalty, duty and self-sacrifice, appear to have abandoned these traditional values. They should take care.

Adeveloper in Australia is building what will be the world's tallest tower. Mr Bruno Grollo is constructing a 120-storey, 1,837-foot edifice in the centre of Melbourne's docklands. It will be substan- tially higher than what is at present the world's tallest building, the 1,480-foot Petronas Tower in Kuala Lumpur, not to mention the 1,250-foot Empire State building.

This Antipodean monstrosity will cast shadows over the Yarra River which runs through the city and block out the sun and the moon, confusing birds by day and pos- sums by night, and forcing aircraft to change their flight paths. It will include a luxury hotel, 450 apartments and 120,000 square feet of office space. People living on the upper floors may even need motion sickness pills to combat the building's 25- foot sway range.

What is it about mankind that it contin- ues to have a fascination with ridiculously tall buildings? It all started with the Tower of Babel and we know what happened to that. Nonetheless, through the centuries, architects have still aspired to reach those celestial heights, as if it would bring them a renewed understanding of the metaphysi- cal. This is an obsession, however, that ought to have died since the advent of the aeroplane. Now that so many of us can fly, what point is there in building towers? Or was the spiritual never an issue? Is it mere- ly a Freudian-influenced question of 'mine is bigger than yours'?