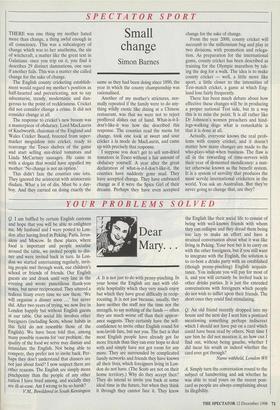 Q. I am baffled by certain English customs and hope that you will be able to enlighten me. My husband and I were posted to Lon- don after having lived in Peking, Paris, Jerus- alem and Moscow. In these places, where food is important and people socialise around the table, we invited people to din- ner and were invited back in turn. In Lon- don we started entertaining regularly, invit- ing people met through work, our children's school or friends of friends. Our English guests ate and drank until very late in the evening and wrote punctilious thank-you notes, but never reciprocated. They uttered a tedious litany every time we saw them: 'We will organise a dinner soon ...' but never did. After two years of trying, we now live in London happily but without English guests at our table. Our social life involves other foreigners (including Scots, whose habits in this field do not resemble those of the English). We have been told that, among many possible reasons for 'our problem', the quality of the food we serve may dismay and intimidate the English. Not being able to compete, they prefer not to invite back. Per- haps they don't understand that dinners are not just about food? I now suspect there are other reasons. The English are simply more pinchpenny than the people of any other nation I have lived among, and socially they are ill-at-ease. Am I wrong to be so harsh?

A. It is not just to do with penny-pinching. In your house the English are met with old- style hospitality which they very much enjoy but which they have great difficulty in recip- rocating. It is not just because, usually, they have neither the staff nor the time nor the strength, to say nothing of the funds — often they are much worse off than their appear- ance suggests. They certainly have the self- confidence to invite other English round for non-lavish fare, but not you. The fact is that most English people have already got far more friends than they can ever hope to deal with and simply have not got room for any more. They are surrounded by complicated family networks and friends they have known all their lives, which foreigners living in Lon- don do not have. (The Scots are not on their home territory.) Why do they accept then? They do intend to invite you back at some ideal time in the future, but when they think it through they cannot face it. They know the English like their social life to consist of being with well-known friends with whom they can collapse and they dread them being too lazy to make an effort and have a strained conversation about what it was like living in Peking. Your best bet is to carry on with the other foreigners, but if you still want to integrate with the English, the solution is to co-host a drinks party with an established (though penny-pinching) English acquain- tance. You indicate you will pay for most of it, and you will certainly be invited back to other drinks parties. It is just the extended conversations with foreigners which people do not wish to inflict upon their friends. The short ones they could find stimulating.

Q. An old friend recently dropped into my house and the next day I sent him a postcard mentioning something perhaps indiscreet which I should not have put on a card which could have been read by others. Next time I saw him he did not mention it, so how can I find out, without being gauche, whether I did incur his wrath or indeed whether the card ever got through?

Name withheld, London W8 A. Simply turn the conversation round to the subject of handwriting and ask whether he was able to read yours on the recent post- card as people are always complaining about its illegibility.