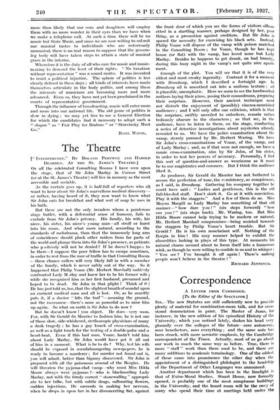 [" INTERFERENCE." BY ROLAND PERTWEE AND HAROLD DEARDEN. AT THE ST. JAMES'S THEATRE.]

OF all the celebrated Consulting Rooms I have seen upon the stage, that of Sir John Marlay in Curzon Street (or at the St. James's Theatre) will live in memory as the most accessible and sociable.

As the curtain goes up, it is half-full of reporters who all want to hear about Sir John's marvellous medical discovery— or rather, having heard of it, they now want to know what Sir John eats for breakfast and what sort of soap he uses in his bath.

But these are not the only invaders whom a ponderous

stage butler, with a deferential sense of humour, fails to exclude from Sir John's privacy. His family, his wife, his niece, his sister, his niece's young man—all stroll or burst into his room. And what more natural, according to the standards of melodrama, than that the immensely long arm of coincidence should pluck other raiders from far parts of the world and plunge them into Sir John's presence, as patients who positively will not be denied ? If he doesn't happen to be there—I suppose the poor fellow has to escape sometimes, in order to rest from the roar of traffic in that Consulting Room —these chance callers will very likely fall in with a member of the family, which is never safely out of the way. So it happened that Philip Voaze (Mr. Herbert Marshall) suddmly confronted Lady M.a.lay- and knew her to be his former wife ; while she recognized him as her first husband, presumed and hoped to be dead. Sir John in that plight ! Think of it f He has just told us, too, that the slightest breath of scandal upon an eminent medical man and all is lost. Or, as he smartly Puts it, if a doctor " hits the turf "—meaning the ground, not the racecourse—there's none so powerful as to raise him up again. So what on earth is Sir John to do now ?

But he doesn't know ! you object. He does--very soon.

For, with Sir Gerald du Maurier to fashion him, he is not one of those slow, side-whiskered, stethoscopic physicians of many a dark tragedy : he has a gay knack of cross-examination, as well as a light touch for the testing of a double-pulse and a heart-beat. Even if this bad man, Voaze, hadn't told him about Lady Marlay, Sir John would have got it all out of hint in a moment. What is he to do ? Why, lest his wife should be exposed in scandalmongering newspapers, he is ready to become a murderer ; for murder not found out is, you will admit, better than bigamy discovered. Sir John is prepared with all the poisonous arsenal of the Borgias. He Nvill threaten the pyjama-clad vamp—why must Miss Hilda Moore always wear pyjamas ?---who is blackmailing Lady Marlay, not with the firmly correct stonewalling " appropri- ate to her tribe, but with subtle drugs, suffocating flowers, sudden injections. He succeeds in making her nervous, when he drops in upon her in her disconcerting flat, against the front door of which you see the forms of visitors ac . etted in a startling manner, perhaps designed by her, poor thing, as a precaution against creditors. But Sir John is spared the necessity for exercising his black arts. Instead, Philip Voaze will dispose of the vamp with poison snatched in the Consulting Room ; for Voaze, though he has kept house (or fiat with the vamp, has loved none but Lady Marlay. Besides he happens to get drunk, on bad brandy, during this busy night in the vamp's not quite nice apart. ment.

Enough of the plot. You will see that it is of the very oldest and most creaky ingenuity. Contrast it for a moment with Broadway, which I described a fortnight ago. In Broadway all is smoothed out into a uniform texture ; all is plausible, unemphatic. Here we seem to see the hardworked authors laying their plans, posing their conundrums, preparing their surprises. However, their ancient technique need not disturb the enjoyment of (possibly) cinema-nourished audiences ; and I will only offer one criticism, which is that the surprises, swiftly unveiled to onlookers, remain rather tediously obscure to the characters ; so that we, in the audience, have to listen to them, on the stage, conducting a series of detective investigations about mysteries already revealed to us. We have the police examination about the vamp, sternly pursued by Mr. Herbert Waring. We have Sir John's cross-examinations of Voaze, of the vamp, and of Lady Marlay ; and, as if that were not enough, we have a comic cross-examination, also by Sir John, of his sister, in order to test her powers of accuracy. Personally, I find this sort of question-and-answer as wearisome as it must be to our magistrates and coroners. But I think the audience liked it.

As producer, Sir Gerald du Maurier has not bothered to secure the perfection of tone, the consistency, so conspicuous, as I said, in Broadway. Gathering his company together he could have said : " Ladies and gentlemen, this is the old full-blocded stuff. Don't shirk it. Go at it with conviction. Play it with the staggers." And a few of them do so. Miss Moyna Macgill as Lady Marlay has something of that old manner—" how dare you ! " (six steps forward) " how can you ! " (six steps back). Mr. Waring, too. But Miss Hilda Moore cannot help trying to be modern or natural. Mr. Herbert Marshall compromises—being assisted towards the staggers by Philip Voaze's heart trouble. But Sir Gerald ? He is his own nonchalant self. Nothing of the Borgia in him ! His easy manner helped to exhibit the absurdities lurking in plays of this type. At moments his natural charm seemed about to focus itself into a humorous wink, as though he were willing to confide in us and to whisper : " You see? I've brought it off again There's nothing people won't believe in the theatre ! "